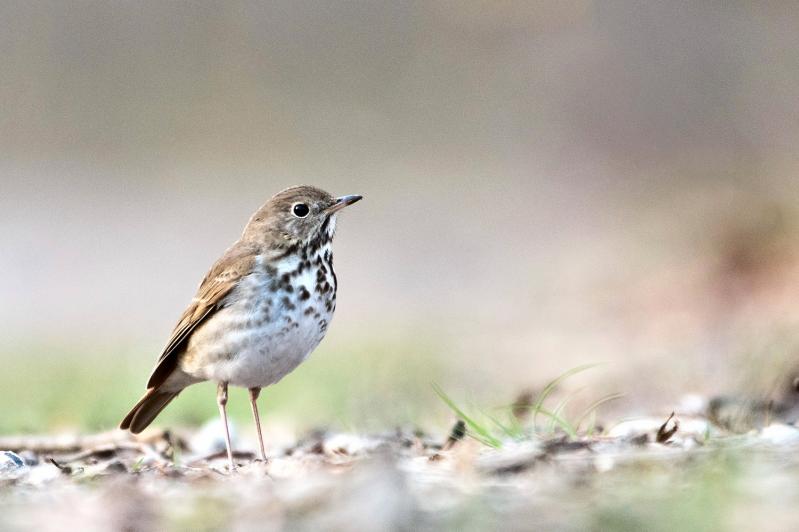 The song of the hermit thrush has long stirred poets and nature writers.
Jay Rand
By Christopher Gangemi

The hermit thrush is unheralded locally. As far as thrushes on the East End go, everyone knows the American robin, and the Eastern bluebird has the distinction of being the New York State bird. But the hermit thrush has long been a favorite of poets and nature writers, largely because of its wonderful song.

John Burroughs, in his 1885 book “Wake Robin” (not to be confused with Woke Robin, recently banned from Florida curriculums), wrote, “A few nights ago I ascended a mountain to see the world by moonlight; and when near the summit, the Hermit commenced his evening hymn a few rods away from me. Listening to this strain on the low mountain, with the full moon just rounded from the horizon, the pomp of your cities and the pride of your civilization seemed trivial and cheap.”

I could have been buddies with John Burroughs.

It’s a bit unfair to talk about the song of the hermit thrush, because on Long Island we rarely hear it. It sings where it breeds, and the hermit is an infrequent nester here. Back when John Bull wrote “Birds of New York State,” in 1974, he said Hermit Thrushes were “found on the south shore from Hither Hills on the Montauk peninsula west to at least Patchogue, and in the center of the island from near Riverhead west to Commack, Pinelawn, Wyandanch, and formerly Dix Hills.”

If you want to hear a breeding hermit thrush on Long Island in 2022, your best bet is to suit up for ticks and find a hidden spot near the Pine Barrens called Hunter’s Garden. Despite everything, a handful still breed there.

While the song is the sparkling characteristic of the hermit thrush, I also appreciate its muted appearance. We can’t all be cardinals. It’s smaller than a robin, and at a glance appears brown above and white below. However, look closer, and you’ll see the brown is soft and warm. Its tail, which it characteristically raises and then slowly lowers, contrasts slightly with rusty hues. Its breast is heavily spotted, its flanks, buff-colored. It has thin pink legs. If you get a really good look, you’ll notice it has a full eye ring.

When it comes to describing a complex bird song, it sometimes helps to put words to the notes. Frank Chapman, in his 1901 book “Bird Life,” heard the hermit say, “O, Holy! Holy!” and added, “there is something about the words which seem to express the spirit of heavenly peace with which the bird’s song is imbued.”

Despite its association with the heavens, one often sees the hermit thrush low in bushes, or on the ground. It nests on the ground, in the boreal forest that spans across Canada, but also in the mountains of the Northeast. According to allaboutbirds.org, the nests are made from grass, leaves, pine needles, and bits of wood, with mud and lichen around the outside. The nest interior is lined with finer plant materials and willow catkins.

You won’t find a hermit at your feeder. That said, I’ve noticed that they have an amazing ability to know when I’m raking. Shortly after I disturb a part of my yard, perhaps displacing an insect or two, usually in the autumn, one will show up to inspect the ground. During the breeding months they eat mostly insects, but in the winter, when you can find a few on the East End, they eat wild berries.

Plant a bush or two on your property that fruits in the winter, and you may attract a hermit thrush. If that’s too much, Camp Hero in Montauk is a great place to see them during the winter. Last week I saw one at Big Reed Pond, also in Montauk. But during March and April, when they are beginning their migrations north, I’ve routinely seen them in the Long Pond Greenbelt, which extends north from Sag Harbor all the way to Sagaponack.

I also have a personal connection to the hermit thrush. Readers of this column may remember that I use the white-throated sparrow (singing gloriously these past few weeks before they too move north to breed. They’re the ones who sweetly sing, “Oh Sam Peabody-Peabody-Peabody!”) as a reminder to stay present.

The hermit thrush reminds me of something else entirely, the people who have come before and passed. In 2010, in late November, my friend Josh Levine was killed in a tractor accident at Quail Hill Farm in Amagansett. A couple of weeks later, I was assigned Quail Hill when counting birds for the Montauk Christmas Bird Count. I happened to be mere feet away from where he passed, near the chicken coop, looking for sparrows, when a hermit thrush landed on a branch just over my shoulder. I spent minutes with that bird — still, observing it — and since then I have always tied their presence to Josh, and by extension, other people I’ve known who have died.

It felt special, but the hermit thrush will act like that. If you’re quiet around it, it will stay with you, watching you as you watch it. We ascribe meaning to experience. It doesn’t have to be scientific, or real, all the time. A popular saying goes, “When cardinals appear, angels are near.” Okay, it’s not super-popular, but maybe you’ve heard a similar sentiment. I obviously have no issue with birds serving as a reminder of loved ones.

I couldn’t recommend the cardinal, however. They are too common. If every time I saw a cardinal I thought of dead people, I’d probably be depressed. For me, the hermit thrush fits the bill. I see it infrequently, its song stirs poets and leads people to think of the heavens, and its muted appearance causes it to blend into the surrounding woodlands, like a shadow on a shadow. A memory hazing over.

The birds are surrounding us always, giving us these little alerts, and are much more pleasant than a buzz from your phone. Let them silently push you closer to consciousness and nudge you away from the rest of the static. Migration is beginning.