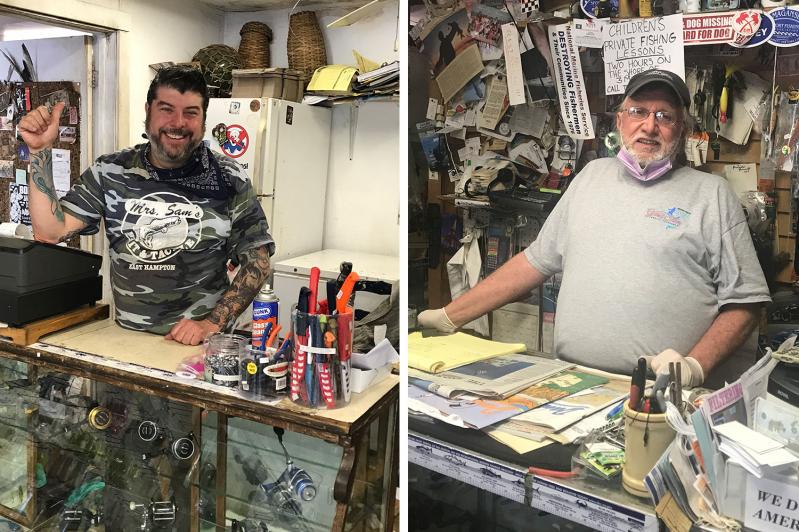 Sebastian Gorgone, left, owner of Mrs. Sam's Bait and Tackle in East Hampton, and Harvey Bennett, right, proprietor of the Tackle Shop in Amagansett, have seen a big uptick in business during the pandemic, but both said that getting stock has been problematic.
Jon M. Diat
By Jon M. Diat

Many businesses have struggled to survive during the coronavirus pandemic and subsequent economic shutdown, but one niche industry is witnessing solid sales. Bait and tackle shops around Long Island have seen a significant uptick in business as more people take up fishing as a social distancing pastime.

Tight Lines Tackle on Bay Street in Sag Harbor has been around for 25 years, but the owner, Ken Morse, says he has never seen anything quite like this.

"It's unfortunate that the virus has been the root of the increase, but I'm glad that so many people have discovered fishing as a safe hobby to get out of the house and enjoy nature," he said on Saturday afternoon in his shop, while helping a father and his two daughters with the purchase of a basic rod and reel combo. "Ever since the virus broke out, it has been beyond busy."

Morse said that while his regular customers continue to show up, it has been a surge in people new to the sport that has comprised the vast bulk of recent sales. "I literally have had hundreds of people come into my shop that I've never seen before," he said. "It's been crazy, but I'm not complaining. Since the virus started, people have gone to try different outdoor activities and fishing is one of them."

Over at the Tackle Shop in Amagansett, the owner, Harvey Bennett, who has been in business for 40 years, reported that a steady stream of anglers has come through his doors since he opened in mid-May. "Springtime is not really busy in this business as the summer crowd is not here yet, but this year has been good," he said. Since many people weren't able to go to work or to school, Bennett said more people have started fishing in the last few months than ever before. In fact, according to the New York State Department of Environmental Conservation, fishing poles are the perfect measuring stick for social distancing.

However, while there has been an increase in demand for bait and tackle, Bennett and other proprietors lamented that a lot of the factory and warehouse suppliers they work with were shut down or lacked inventory of many fishing essentials.

"A vast majority of tackle is produced in Asia, and hardly anything is coming into the U.S.," Bennett observed. "I was fortunate that I bought a lot of inventory last year, but it's been a real challenge trying to secure many items the past few months. Even getting a basic snapper popper lure has been tough."

"Business has been really off the hook," agreed Sebastian Gorgone, the owner of Mrs. Sam's Bait and Tackle in East Hampton. "I've had many new faces and first-timers come in the door. Some said they've been here for over 20 years, but have only now taken up fishing. And it's not just fishing equipment and tackle. I'm having a hard time keeping clam rakes and crab traps in stock."

Gorgone agreed that it's been a challenge to get many types of tackle. "If I have an order for $5,000 of goods from my supplier, I'm lucky if I get $2,000 worth. I'm sold out of my beginner types of rod and reel combos, and I'm not sure when my distributor will get more. I know I could sell a lot more if I had them."

"The other day, I placed an order for $3,000 of tackle and I received $680 worth," said Bennett. "No matter who you call, it's the same response. I tell anyone in my shop if they see what they want, they better buy it, as I don't know when I may get it again."

Fishing tackle has even entered into the cross hairs of the Trump administration's trade war with China. Last month, the office of the United States Trade Representative said that items including rods, reels, hooks, line, lures, and line are likely to be hit with a 25-percent tariff in the near future.

"As good as business has been, it could be even better if I had access to the tackle supplies I need," said Morse. "It's really frustrating. And I don't think the supply chain will change for the better any time soon."

With the influx of anglers fishing from both the beach and boat, keeping bait and tackle shop owners happy, thankfully the action has been good for a wide variety of species.

"Porgy fishing remains excellent in many local spots and at Gardiner's Island," said Gorgone. "The fish are big and hungry." The veteran shop owner said that fluke fishing had picked up, in particular in the Napeague and Accabonac areas, and that blowfish are still around.

"Plenty of porgies around everywhere," said Bennett. "Bass and blues are keeping folks happy, and the bite from the ocean shore on Napeague has been hot of late. Fluke action picked up nicely on the bay side at Napeague, and there are shad everywhere too. Plus, the bluefin tuna bite south and west of Montauk continues."

Bennett added that large striped bass have shown up at Montauk, with fish up to 50 pounds landed. However, the big ones need to be safely returned: Only one fish between 28 and 35 inches can be retained.

Anglers who have been throwing back the multitude of black sea bass that have jumped on their baited hooks the past few weeks can finally rejoice, as the season for the popular fish finally opened on Tuesday. There is a three-fish-per-person limit with a minimum size of 15 inches. The creel limit increases to seven fish on Sept. 1.

Hoedown on the Farm, Cocktails in the Garden
Main Beach Free Concerts in Final Weeks
Services and Counseling After Death of Popular Teacher Assistant
END_OF_DOCUMENT_TOKEN_TO_BE_REPLACED