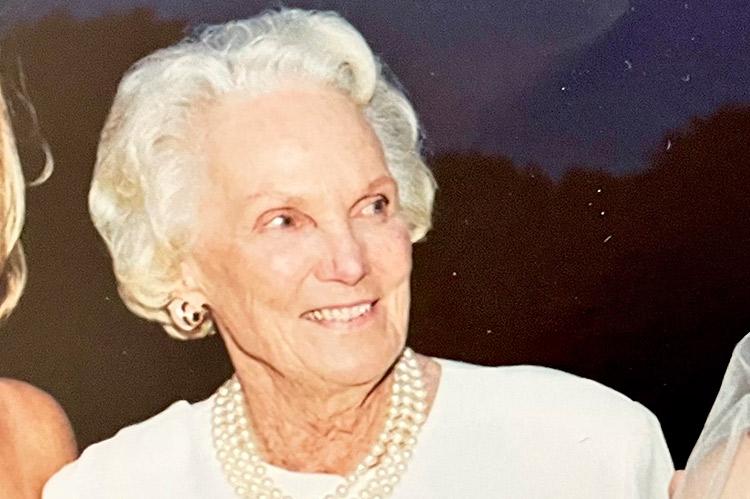 Constance Miller Hoagland of East Hampton Village had a successful career in Greenwich, Conn., as a real estate broker, but many here will remember her from the Monogram Shop, the store on Newtown Lane owned by her daughter and granddaughters, where, in jewel-colored cardigans and pearls, she presided over the front counter.

She was born in East Hampton on March 19, 1924, to Ernest Miller and the former Catherine Rampe, and lived on Dunemere Lane, attending school here until eighth grade, when she was sent to boarding school, St. Mary’s School for Girls in Raleigh, N.C. “I was homesick the entire time,” she used to say. After graduating, she studied nursing at New York University for two years, and later, during World War II, used that training to volunteer for many hours at Southampton Hospital.

She and Edgar Day Hoagland met soon after the war ended and he returned from naval service in the Pacific. They married in October 1947 and lived in New York City for a few years before settling in Greenwich. There, she began her real estate career, becoming the top broker at Cleveland, Duble, and Arnold. In the 1960s, she sold the first house in Greenwich ever to go for the then-eye-popping price of $1 million.

During the years in Greenwich, the Hoaglands spent summers in East Hampton, where, through “wile and guile,” her family wrote, Mrs. Hoagland eventually bought back the Dunemere Lane house where she had grown up. After moving here full time, she joined Amaden Gay Real Estate.

She had a competitive spirit. “The same qualities that made her such a success as a broker were soon applied to the games of bridge and golf,” said her family. With her bridge partner, Lucy Mackall Sachs, she was “a force to be reckoned with” at games in Montauk and Water Mill and at the Maidstone Club and Devon Yacht Club. Her unquestionable “happy place” was the Maidstone golf course, where she played 18 holes whenever she possibly could. She was Ladies Club Champion four times, most recently in 1987, and won the Maids Bowl five times, most recently in 2007.

When not on the golf course or at the bridge table, Mrs. Hoagland was busy with needlepoint and rug hooking. She made Christmas stockings for her grandchildren and great-grandchildren, and her hooked rugs were popular with family members. Collectors loved them too, and found them at the Monogram Shop.

Mrs. Hoagland was a loving and inspiring matriarch, her family wrote. “Always beautifully dressed and coiffed, she was in the truest sense of the word a great lady.”

Mrs. Hoagland was cremated. A memorial service will take place in the future.