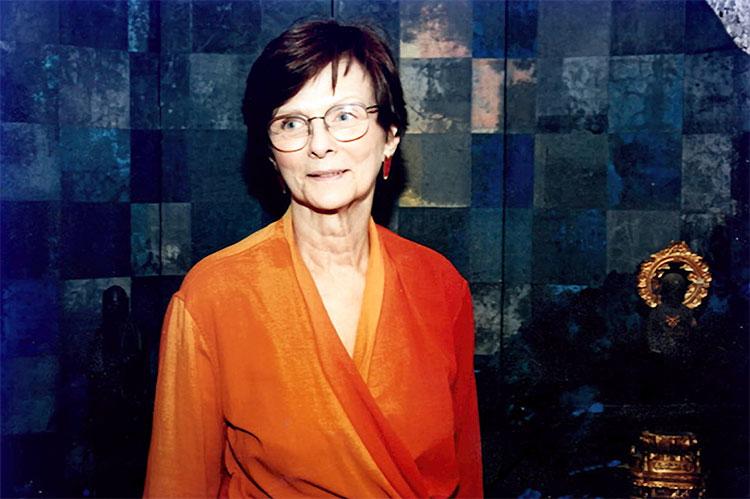 Katherine Donan Cline, who had successful careers as a costume designer for the theater, a clothing designer and producer, and a visual artist, died of a stroke on Dec. 21, 2020, at the Mary Manning Walsh Home in Manhattan. She was 85 and had been ill for two weeks.

Ms. Cline was born on June 22, 1935, in Magnolia, Ark., to John D. Crone and the former Sarai Thomas. After growing up in Milford, Ohio, she earned a B.A. from Randolph-Macon Woman's College in Lynchburg, Va., and an M.F.A. in costume design from the Yale School of Drama.

During the 1960s, she put her master's degree to good use designing costumes for theatrical productions on Broadway as well as for the Chicago production of "Fiddler on the Roof," with Zero Mostel.

Ms. Cline began working in Manhattan's garment industry in the '70s, first as a menswear designer for Rainfair International, then designing sportswear for H.I.S. for Her. She launched her own business, designing and producing hand-loomed sweaters under the label KDC Inc., in the late '80s.

"Katherine went on working in the garment industry long after it had lost its glamour for her, during the early stages of my father's career as a lighting designer," said her daughter, Rachel Cline, in an email. " 'Someone in the family has to have a straight job,' she liked to say."

"At the time, I thought she was being a little melodramatic -- suggesting that she might have been a successful artist had it not been for her commitment to supporting my Dad, but I underestimated her." Her husband, Carroll Brokaw Cline, whom she married in June 1970, died in 2000.

From the late '90s until her death, Ms. Cline worked as an artist, producing inventive mixed-media constructions featuring wooden boxes. Inside them, she placed multiple archival pigment photographs she called "suspended landscapes." The images were printed on such unusual materials as strips of silk organza, vellum, and Usuyu Gampish, a paper made from a silky fiber native to Japan.

Under the name of Katherine D. Crone, she exhibited her work internationally, at art fairs in Hamburg, Germany; Ube City, Japan; Brussels, Singapore, and at Scope Basel in Switzerland, among many others. She also showed at A.I.R. Gallery, the Carter Burden Gallery, and the Center for Book Arts in New York City, the Plains Art Museum in North Dakota, and the Chicago Cultural Center, to name just a few.

She had an apartment on West End Avenue in Manhattan and a house in Springs as well. She showed her art locally at Guild Hall, the Islip Art Museum, and Ashawagh Hall, and was a member of the Artists Alliance of East Hampton. Other memberships included LongHouse Reserve in East Hampton, the Center for Book Arts, Friends of Fiber International, and the Textile Study Group of New York.

Ms. Cline and her husband had a strong interest in African art, accumulating an extensive collection of metal and wooden objects from West Africa. Fascinated with Japanese design culture, she studied the language at the Japan Society in New York for several years and traveled to Japan three times, twice with her husband.

Her daughter said that her success as an artist, indeed her entire career, belied her upbringing. "She had been raised to be an ornament, after all, a Southern belle. It turned out she was very much an artist in her own right, as well as an ally to other artists, and a real New Yorker -- getting takeout from Zabar's every night during the pandemic. Even in her 80s, even at night in Brooklyn, in the freezing rain, she refused to take a taxi. 'The subway was good enough for your father, and it's good enough for me,' she would say."

In addition to her daughter, who lives in Brooklyn, she is survived by a son, Henry Cline, of Cumberland-Foreside, Me.; three grandchildren, a niece, Jennifer Crone of San Antonio, Tex., and a nephew, John Crone III of Nassau, Bahamas. Sara Pettit of East Hampton, her "dearest friend," said her daughter, also survives.

A gathering for friends will be held in New York City on Aug. 16.