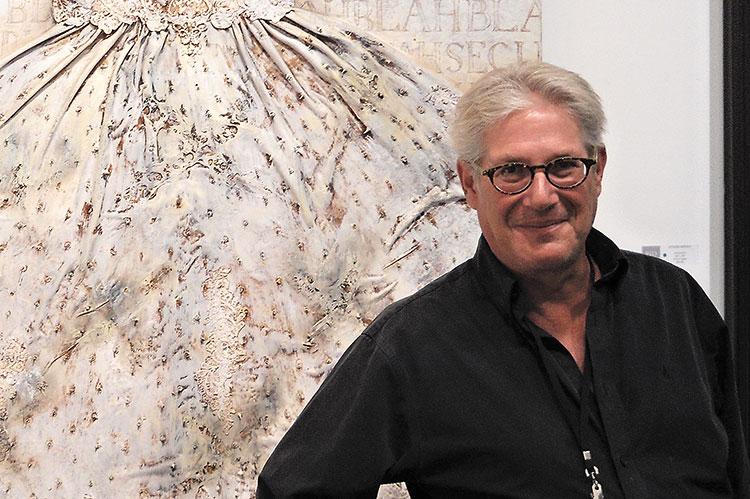 Charles Waller's illustrations, paintings, and assemblages combined whimsy, wit, and humor with sarcasm and social commentary. His work — paintings on distressed tin, embellished bone, layered and textured collage and constructions using vintage objects of iron and wood — appealed to a wide audience and reflected his unique take on life.

"I call it sarcastic folk art," he told The Star in a September 2000 interview. "You can't call it folk art because it's not cute. Sarcasm plays a real big part in my work. I think humor is the best way to make a point."

Mr. Waller died at home in Springs on Jan. 16. He was 66 and had contracted Covid-19 two weeks earlier.

He was influenced, he said, by the painters David Hockney, Francis Bacon, and Jean-Michel Basquiat, the surrealism of Rene Magritte, Joseph Cornell's assemblages, and Terrence Gilliam's animation for "Monty Python's Flying Circus."

Mr. Waller began his art career as a commercial illustrator, doing illustrations for The Boston Globe while still studying at the Rhode Island School of Design.

In an early break, after moving to Manhattan Mr. Waller was hired by the graphic designer Milton Glaser at New York magazine; he credited Mr. Glaser with encouraging him to create illustrations reflecting his unique interpretation of ideas.

He did drawings for corporations such as Citibank and American Express, and publications including Psychology Today and The New York Times. His work for The Times and for Esquire magazine won numerous awards.

For a decade, Mr. Waller did up to 20 drawings a week for The Times to accompany editorials and columns. The illustrator was often on round-the-clock call; during the Iran hostage crisis, he was called in by Time magazine at midnight to sketch the layout of the embassy where the hostages were held, based on a diagram slipped secretly to the magazine. He was a co-founder of Inx, a company that syndicated drawings of current events to newspapers worldwide.

Before moving to East Hampton full time in 2002, drawn by his love for the water, sailing, and fishing, he lived in a three-story West Village loft that became "like a museum," he said, full of collected objects.

Mr. Waller, the son of the late Georgia Waller and Gerard F. Waller of Houston, who survives, was born on July 19, 1954, in California. His father was in the oil business, and the family moved often when he was young, to Panama, Peru, Costa Rica, and London.

Early on, he dreamed of being a veterinarian, until his math and science grades intervened. He began drawing as a 7-year-old, often sketching his exotic pets, which included snakes, monkeys, and a large iguana. In more recent years, he shared life with a parrot named Tattoo.

As a young teen he explored London's museums, and later studied English literature and psychology at the University of London and illustration at the Royal College of Art before graduating with a bachelor of fine arts with honors from RISD.
Mr. Waller explored themes and ideas in various series of artworks that grew from research and collections: a series of illustrated words, images of dogs, tattoos, a series in which he repurposed full-size wedding dresses, and another, called "Communique," using vintage envelopes and letters between a World War II sailor and his eventual bride.

"Once I get an idea, then half the fun is going on the hunt for the rest of the objects," he said in the 2000 interview.
He traveled regularly to the monumental antiques show in Brimfield, Mass., and in London had roamed Portobello Road for treasures such as antique pipes and swords.

In addition to galleries in Manhattan, London, Japan, and Santa Fe, Mr. Waller's work appeared in numerous group and solo shows on the East End, including at the former Morgan Rank and Pamela Williams Galleries.

His collectors included the late Alfred Hitchcock and Kirk Douglas, Donna Karan, the director Barry Sonnenfeld, President Ronald Reagan, who was presented at his inauguration with a drawing by Mr. Waller from Time magazine depicting him lying on a bed of missiles, and the Baseball Hall of Fame. His work is also in the collections of the Parrish Art Museum, Guild Hall, Micro Museum in Brooklyn, and the Dai-Nippon Gallery in Tokyo.

A gregarious man and a loyal friend to many, Mr. Waller was a dearly loved member of the Springs community. A memorial gathering is planned for the summer.

In addition to his father he is survived by a longtime friend and former partner, Geralyne Lewandowski of Springs, a brother, Vance F. Waller of Boerne, Tex., a nephew, Vance F. Waller Jr., and a cousin with whom he was very close, George Craig of Connecticut and Maine. His mother died before him.

Memorial contributions have been suggested to the New York Foundation for the Arts, 20 Jay Street, Suite 740, Brooklyn 11201.