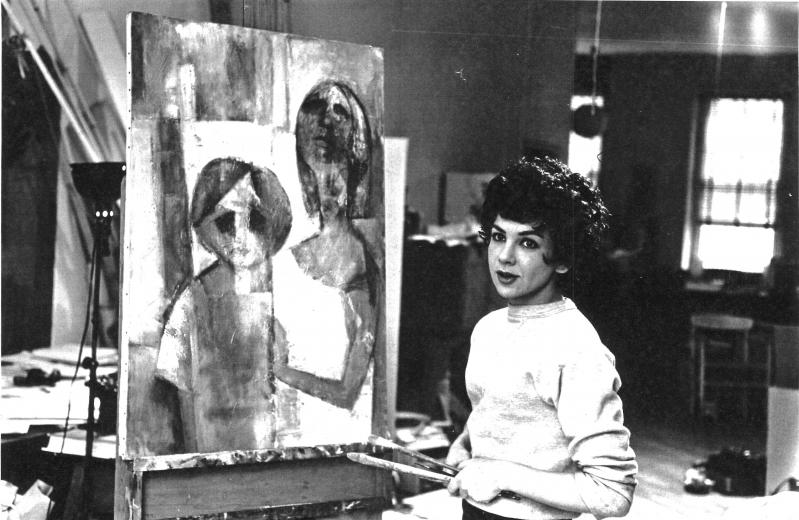 Beryl Bernay, a part-time resident of Springs for many years, died in her sleep of complications of Covid-19 on March 29 at the Mary Manning Walsh Home in Manhattan, where she had been living for 16 months. She was 94 and was sick for less than a week, said her niece, Carol Gonzalez of Beaverton, Ore.

A woman of almost infinite talents, Ms. Bernay had a career that ranged from fashion designer — when she graduated from George Washington High School in Manhattan at age 15 and was too young to enter college — to actor, journalist, amateur anthropologist, and United Nations official. She was a photographer and painter, having studied at the Art Students League and Cooper Union. These were perhaps her two most abiding passions, and she continued to engage in them after buying a house in Springs in 1981.

Beryl Bernstein was born on March 2, 1926, in Brooklyn, one of two children of Barney Bernstein and the former Sade Kossove, Russian immigrants. Her father changed the name in 1937 to Berney; Ms. Berney changed it to Bernay as a young adult. She grew up in New Jersey and later lived in the West Village in Manhattan.

Once she was old enough, Ms. Bernay attended the University of Pennsylvania. Later on, she would take graduate anthropology courses with Margaret Mead at Columbia University, which would lead to yet another adventure. She studied acting in Manhattan with Uta Hagen and Herbert Berghof, appearing on Broadway in “Junior Miss” in 1943, “Tonight in Samarkand” in 1955, and in 1957 as the narrator in “The Dancers of Bali.” A gregarious person, she apparently invited the whole cast to her West Village loft parties, where, according to her niece, she taught them to use chopsticks.

She also appeared in a Paris production in 1955 of Thornton Wilder’s “The Skin of Our Teeth” with Mary Martin, George Abbott, and Helen Hayes. Stateside she appeared on television on such programs as “The Philco Television Playhouse,” “Robert Montgomery Presents,” “The Red Buttons Show,” “Westinghouse Theatre,” and “General Electric Theatre.” In East Hampton, she appeared at Guild Hall’s John Drew Theater and also, relatively recently, at the Bay Street Theater in Sag Harbor.

While acting in Paris, she fell in love with the city, and, when she went to meet “her painting idol,” Picasso, and Marc Chagall in the South of France, her article about them helped her get photography assignments as well, which led to photographs of Bertolt Brecht, Maurice Chevalier, and James Baldwin, as well as a visit to Roberto Rossellini and Ingrid Bergman in Rome, who invited her to their villa, where she was given an exclusive interview.

In the early 1960s, Ms. Bernay created an award-winning multicultural children’s show produced by the United Nations Children’s Fund, “All Join Hands,” perhaps even prefiguring Fred Rogers and his own long-running television program. For two years she and her two puppet co-hosts, Ms. Bookworm and Doodle the Travel Bug, narrated the show, which highlighted different countries through their art, dance, and music. In the audience were the children of U.N. delegates, and even U.N. Secretary-General U Thant watched it regularly with his grandchildren.

She had a photography assignment in 1964 on location in Bali for Holiday magazine. She also met President Sukarno in Jakarta, Indonesia, where she covered the political upheaval and attempted coup as one of the only overseas female journalists at the time.

Her paintings and photography have been exhibited all over the world, as well as locally at Guild Hall and Ashawagh Hall. In June 2019, Elena Prohaska Glinn, an art appraiser, and other East Hampton artist friends of Ms. Bernay’s displayed her paintings, watercolors, drawings, photographs, and, what Ms. Prohaska Glinn called “a vast, eclectic, international collection of decorative carvings, Indonesian puppets, tribal trinkets, and fascinating artsy clothes,” at Ms. Bernay’s Springs studio. “She was beautiful, talented, oh so smart, and could be maddening as she would fight you all the way,” Ms. Prohaska Glinn said.