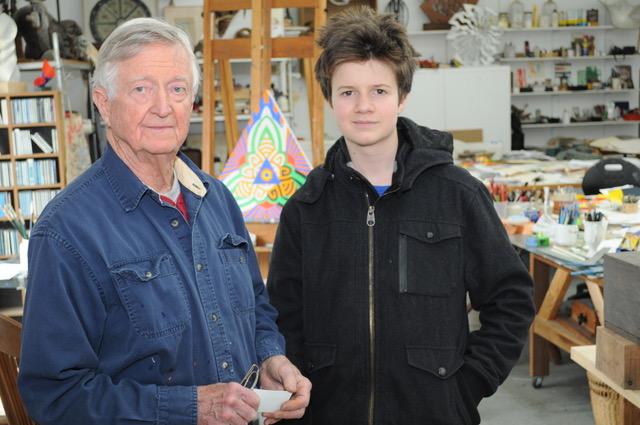 Jack Youngerman, a significant American artist for more than six decades, died on Feb. 19 at Stony Brook University Hospital of complications from a fall. He was 93.

Mr. Youngerman, who had a house and studio in Bridgehampton since 1968, majored in journalism at the University of Missouri. In 1947, after serving in the Navy, he enrolled at the Ecole des Beaux-Arts in Paris on the G.I. Bill. Within two years he had abandoned figurative painting for the kind of hard-edged abstractions that have characterized much of his painting and sculpture ever since.

He returned to New York in 1956 with his wife, the French actress Delphine Seyrig, and had the first of seven solo exhibitions at the Betty Parsons Gallery two years later. In 1959, Dorothy Miller selected him for “16 Americans,” her landmark exhibition at the Museum of Modern Art. The show heralded a new, post-Abstract Expressionism generation of artists, among them Frank Stella, Ellsworth Kelly, and Jasper Johns.

More than 50 one-man shows followed, including a 1986 retrospective at the Guggenheim Museum. Mr. Youngerman’s work is in dozens of important public collections throughout the United States and abroad.

His marriage to Ms. Seyrig ended in divorce. He is survived by his wife, Hilary Helfant; a son, Duncan, from his first marriage, another son, Milo, from his second marriage, and four grandchildren.