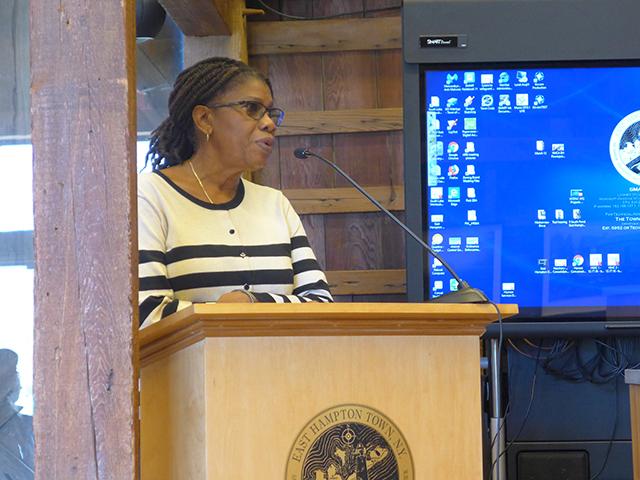 Surfcasters who stay at her Harborside Motel on Lake Montauk in the fall are an important part of her business, Merle McDonald-Aaron said, adding that she would have to cut back on the number of parking permits she buys each year if the cost goes up significantly.

Following objections from Montauk hotel and motel owners and co-op managers, the East Hampton Town Board decided Tuesday to scrap a proposal that would have sharply raised the rate the town charges for beach parking permits used by guests.For at least a decade, the annual transferable permits have been $75 each. Unlike normal resident and nonresident parking stickers that must be affixed to a vehicle window, the ones used by motel guests are kept at the front desk and handed out on a short-term basis.Residents’ permits are free; nonresidents pay $375 each year.The recommendation had been for the transferable permits to cost $300 this year and rise to $600 in 2020.Overcrowding during the peak summer season, as well as costs associated with increased numbers of beachgoers, prompted the discussion. During a town board meeting on Tuesday, Laraine Creegan of the Montauk Chamber of Commerce said that she represented the owners of more than 2,100 guestrooms and that the town issued only 461 guest permits in 2018. “No one is selling permits, as one town board member told me,” Ms. Creegan said.“A $75 permit is fair,” she said. “We are a tourist town, and our visitors should have access to these permits,” she said.“All these businesses pay taxes and they feel that they should be entitled to one of those permits.” She also noted that the price changes were not run past the town’s business committee, of which she is a member, first.Ms. Creegan conceded that a 10-percent increase over the standing permit cost would be acceptable. This would have brought the fee for each one to $82.50. A 15-percent increase, the high end universally suggested by the accommodation owners and managers at Tuesday’s meeting, would bring the price to $85.75.Under the rules as they stand now, motel owners pay for the season’s passes up front. For Tyler Aposhian, of Ruschmeyer’s Montauk, which buys 20 each year, the proposed $600-per-permit cost by 2020, due in May, would have added up to $12,000. Because the town clerk’s office only takes cash and checks, that would mean he would have to come up with the money before visitors and their cash showed up, without even the luxury of being able to put it on a credit card.Supervisor Peter Van Scoyoc explained the thinking behind the fee-hike proposal. “These visitors are going to our local beaches, using up our parking places.” One of the town’s goals, he said, was to reduce the number of vehicles because of parking demand, traffic, and greenhouse gas emissions. “There are impacts that local residents end up paying for. Basically that falls on the local taxpayers.”Kathy Weiss of the Wave Crest Resort called the $600 potential fee excessive. She also said she hoped that some of the money raised by any increases would go to Montauk. Among the changes she would like to see would be Hampton Hopper shuttle service to Gin Beach on East Lake Drive.According to town statistics, Montauk experienced a 10-percent increase in beachgoers between 2017 and 2018. Due to the heavier use, the town added a second downtown lifeguard station. Larry Seidlick, an owner of the Montauk Beach House, a hotel in the downtown area, asked that the board reconsider. “If it needs to go up, some moderate increase would be more than reasonable,” he said.For the Beach House’s 33 rooms, Mr. Seidlick said, it only buys four to six permits each year. Of these, only one or two are used at any one time, he said.“I have to admit that I am a little fuzzy on what we’re trying to accomplish with the regulations. I am not aware of anyone abusing the situation,” he said.“It is an extraordinarily low price, given the value of what it is,” Supervisor Peter Van Scoyoc said. “I think what we would really like to see is a shift away from individual cars being used to some extent and having more shuttles available,” he added. About 23,000 riders used the free Montauk shuttle last year.“There is an additional cost that town taxpayers have to put forward to make that shuttle work,” he said. “We haven’t had support, financially, from the businesses that benefit from it.” Steve Kalimnios, an owner of several oceanfront resort properties, said that if the town raised the permit price too high, hotels and motels would cut back on the number they buy. He supported expanded shuttle service in Montauk, adding that he had offered to pay for an additional stop near one of his motels. “Maybe that is something that we can all discuss, having strategic placements of the stops,” he said.Merle McDonald-Aaron of the Harborside Motel told the board that many of the guests she houses in the fall are there to fish, many returning year after year. For her 27 rooms, she usually gets 12 permits. “I can’t afford it at $300.”Both Sylvia Overby and David Lys said they were not ready to move forward on the proposal; however, Mr. Van Scoyoc, Councilman Jeffrey Bragman, and Councilwoman Kathee Burke-Gonzalez opted to set the fee at $100 this year.On Tuesday, Ms. Creegan still expressed frustration. “I feel they should not have increased it at all this year without bringing the increase issue to the town-appointed business committee for which I and Paul Monte [of Gurney’s Resort] are members. We had no opportunity to discuss the proposed 300-percent increase,” she said.Parking permits are required at town beaches year round, 24 hours a day. Nonresidents are not allowed to park at Indian Wells Beach in Amagansett or the largest of the Ditch Plain lots in Montauk.All permit holders are allowed to launch boats at town-maintained ramps. -This article has been updated to remove a quotation attributed to Laraine Creegan that was reported in error.