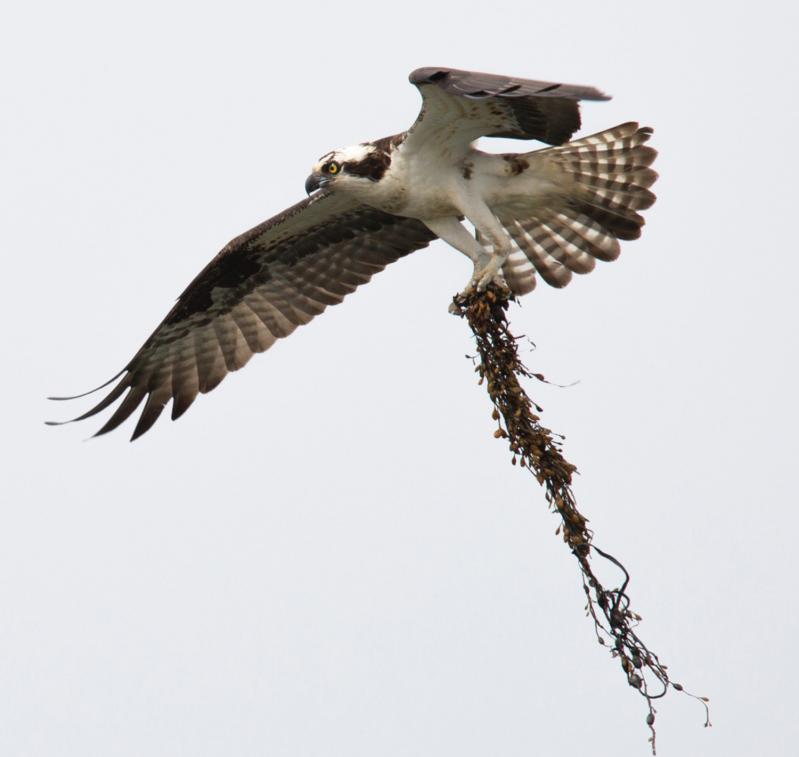 As this osprey padded its nest earlier this spring, not far behind were the migratory fish crows.
By Larry Penny

Fish crows arrived three weeks ago and have already taken over the South Fork population centers, including Sag Harbor, Southampton Village, East Hampton Village, and Montauk. What was an extreme rarity 35 years ago has now become a rite of spring in the Hamptons. Most of us can’t tell the difference between a fish crow and a common crow, the species that has been calling to us here since time immemorial, but once you hear that nasal kah-kah-kah, you’ll know what I’m talking about.The fish crow is like a toy poodle compared to its bigger look-alike. It’s all black, like its bigger brother, and is migratory. It disappears in the middle of fall and arrives back shortly after the robins, ospreys, grackles, and red-winged blackbirds. The common crow stays here the whole year round. It is not a typical migrator.If you ride through Main Street of one of our villages these days and see two or more crows fly across the street the way pigeons do, you can bet you are seeing fish crows. They are the urban equivalent of common crows and don’t stray far from the Atlantic Coast. Common crows flock up before and after the breeding season, which runs from April through July, but fish crows flock up throughout the entire year. They often nest in proximity to one another high up in trees. It’s almost impossible at any time today to get to Havens Beach in Sag Harbor during April, May, June, July, or August and not encounter one.Like the horde of two-footed birds that stream here from the west during the warm months, fish crows love to be at the seashore or near the coast. That’s where they spend most of their time while feeding.Black-colored bird species are relatively rare across the globe. We also have ravens, two species of vultures, cowbirds, two species of grackles, red-winged and Brewer’s blackbirds, cowbirds, and starlings.Coots and American scoters (also called coots locally) are black, as are our two species of cormorants, the rare black rail, and two species of tropical anis. An advantage of having black feathers is that they have little market value, unlike the whitish fluffy feathers of snowy egrets, the downy feathers of eiders, and so on. Plume hunters were once as common as game hunters in America, and they weren’t after crows or ravens.All of our black birds and almost all of those on the other six continents are flockers, and almost none of them sing. The red-winged blackbird is an exception. Why is that? It’s hard to say. Perhaps black species are more utilitarian than the songbirds. Why spend your time singing and defending a territory four or five hours a day when you could be out feeding, maybe even robbing a songbird’s nest or two while you’re at it.It’s not unusual to find crows feeding alongside grackles and red-winged blackbirds in local fields during the nonbreeding season. They all seem to get along well.And what about the European starling? In Europe they often migrate, but not in America, where they have been established since the mid-1800s. They tend to keep to their own and form incredible flocks that are as maneuverable in the air as herring and shad schools are in the water. For some reason, the starling flocks in Europe are larger, more gregarious, and more precise in their maneuvers than they are here.We on Long Island are lucky. We have most of North America’s black-feathered species, and one doesn’t have to carry a bird book or sing to them using a smartphone to identify them. They stand out in their blackness.Larry Penny can be reached via email at [email protected].