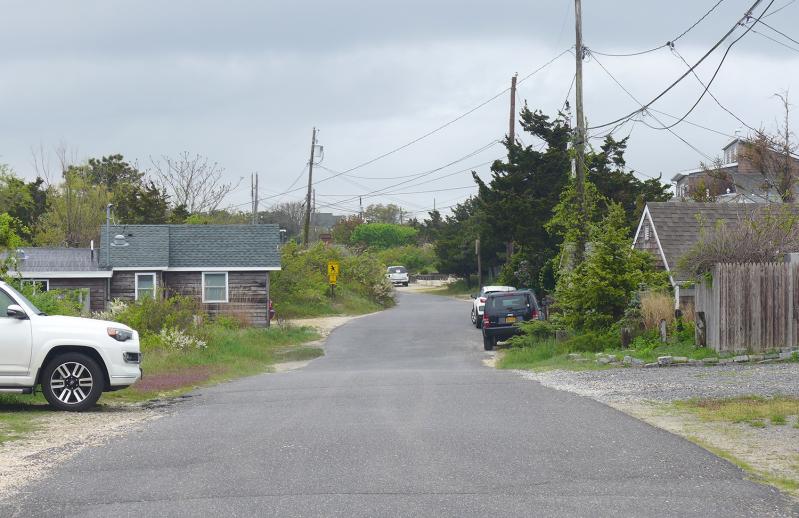 Residents of Lazy Point in Amagansett applauded the East Hampton Town Trustees for extending leases on the land where they live from one year to 35 years.
By Christopher Walsh

As they have signaled in discussions and negotiations over the past several months, the East Hampton Town Trustees voted on Monday to change the lease terms of trustee-owned land at Lazy Point significantly. Six trustees voted for the change, two abstained, and one recused himself.Over the furious objections of one town resident who does not live at Lazy Point, and after an April 8 public hearing at which she and others, including a former clerk of the nine-member body, urged a more gradual increase, the six voted to extend the leases from one year to 35 years. The altered terms, the trustees believe, will allow prospective buyers to obtain mortgages and make it easier for tenants to get long-term loans to make improvements. The change, the tenants and landlords alike said, will bring security to both sides: Tenants will benefit from the stability of a long-term lease; trustees from the continuous revenue.Real estate at Lazy Point is anomalous on the South Fork, home to some of the most expensive property in the country. Residents own their mostly unassuming houses, but not the small lots on which they sit. Rents remain as modest as both houses and lots. When the trustees raised the annual rent by 50 percent in 2013, the new figure was just $1,500. After contentious negotiations in 2015, terms were modified to include an annual 2 percent rent increase and a 2 percent transfer fee, assessed to both buyer and seller when a property changes hands. The trustees derive about half their annual revenue from the leases and transfer fees. After the April hearing, the trustees held the record open for comment through Friday. At Monday’s meeting, Elaine Jones of Amagansett, who had criticized the plan for 35-year leases at the hearing, protested to Francis Bock, the trustees’ clerk, that she had come to the trustees’ office at the Lamb Building in Amagansett on Friday at 12:30 p.m., and that Mr. Bock, if he was inside, did not answer the door. “The things you make up amaze me,” Mr. Bock said. “The things you lie about amaze me,” Ms. Jones shot back, saying that a petition opposing the 35-year lease term was being circulated. She does support extending leases to five or 10 years, she said, but “I can’t believe you are giving away Lazy Point leases” to property that “belongs to East Hampton Town residents.” Should the trustees proceed, she said, “There will be so many lawsuits against the Town of East Hampton.” Vincent Priori, a Lazy Point resident, then spoke. “I’m not sure I understand what the objections are for a 35-year lease,” he said. “The trustees aren’t breaking new ground with a 35-year lease. The Town of East Hampton has a 99-year lease.” The reference was to affordable housing on town-created subdivisions where residents have bought or built houses but the town maintains ownership of the land. In 2012, Mr. Priori added, the Town of Babylon voluntarily extended leases on more than 400 properties at town-owned barrier beaches, under an arrangement similar to that at Lazy Point, from 35 to 50 years. Yet, Mr. Priori said, “all we hear are negative comments.” “It’s an election year,” Mr. Bock offered.“All we’re looking for is security,” Mr. Priori said. “What’s so wrong with that?” Christopher Carillo, the trustees’ attorney, said that the new lease had been updated to make it clear that a new tenant would assume the remainder of an existing 35-year lease, rather than restart it. Future trustees, he said, will be able to change the terms. With that, Jim Grimes, a deputy clerk of the trustees who heads its Lazy Point committee, moved to extend the leases. Bill Taylor, the other deputy clerk, seconded the motion.Rick Drew, who owns a house at Lazy Point, recused himself from the vote. Susan Vorpahl and Dell Cullum abstained. Ms. Vorpahl said she had lingering questions as to whether the move would solve the problem it is intended to address, and whether it was wise given climate change. “I don’t know if we’re creating more of a problem for future boards than we’re intending,” she said. “Maybe before we sign off on something like this, in all fairness to the residents and us, have experts look at the environment. What is that shoreline going to look like in 10, 20, 35 years, and do we want to promote people getting tied into these long leases if that landscape might drastically change?” Mr. Cullum said he was “not 100-percent certain that the Town of East Hampton wants this.” All of the town’s residents own the land, he said; the trustees manage it on their behalf. “I said at the beginning that if [the residents] didn’t come out and represent themselves, I was going to just vote in favor of the people at Lazy Point. . . . They continue to disappoint me for not coming out for these important issues. But you folks in Lazy Point are good folks. You’ve got paradise over there, and I want the best for you. I suspect you’re going to get it.” He had received the final draft of the lease the evening before, Mr. Cullum said, and was abstaining in order to “play it on the safe side for the entire community. But I have no objection to you getting what you want and getting the security you need.”With six votes in favor and none against, the motion carried, and the many Lazy Point residents in attendance erupted in sustained applause. The trustees then voted to extend the present one-year leases, which are set to expire next week, for 30 days to allow the final draft to be circulated and reviewed by Lazy Point residents’ representatives.As the residents stood to leave the meeting, Mr. Priori could be heard telling a neighbor that those opposed to extending the leases “don’t live there, have money, and don’t know what they’re talking about.”