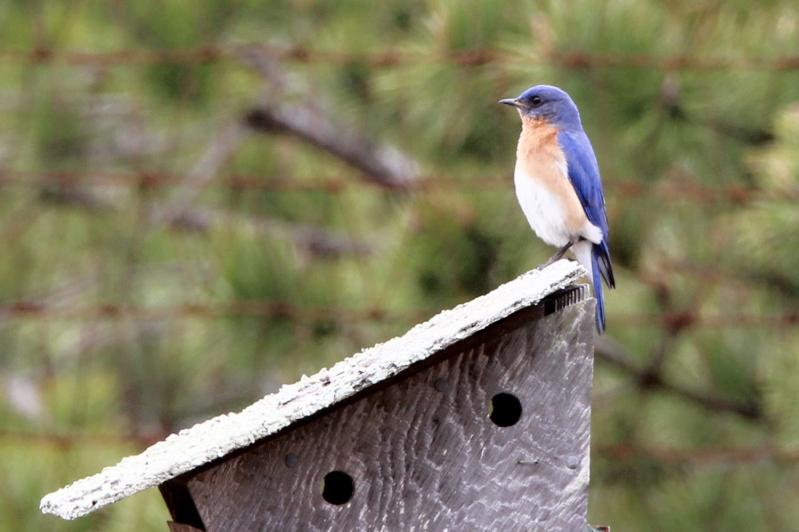 New York State’s bird, the eastern bluebird, is doing well in East Hampton Town, thanks to the efforts of some very dedicated volunteers.
Terry Sullivan
By Larry Penny

Who knew that the New York State bird was a thrush? When I think of a thrush, I think of a bird that is brown and white streaked, not a bluish bird with a reddish chest like the eastern bluebird. The common robin is decidedly a non-thrushlike thrush, with its brown back and red breast. Two things that these members of the Turdidae, or thrush, family, have in common are that they sing prettily and don’t come to feeders. They are not seed eaters and instead feed on insects and other invertebrates, as well as fruit. Everyone who has a lawn knows the robin; its favorite food during the breeding season is earthworms.

The eastern bluebird is the only North American thrush that doesn’t build a typical nest in a tree or bush during breeding season. It lays its eggs in a hole in a tree or a nonliving substitute, a bird box.

During the DDT years, the bluebird population plummeted like that of the osprey and several other bird species because it was fond of farm fields and orchards, which were sprayed with a variety of poisons to keep down injurious insect populations and weeds. They were also out-competed for natural nesting holes by starlings, house sparrows, and house wrens. This last species is famous for occupying and building several nests during the breeding season but only using one of them to raise its young.

Like the other Long Island towns and villages, East Hampton Town became almost bluebird-less. By the mid-1980s there were only a few pairs of locally nesting bluebirds: one in Hither Woods, another in Springs. This drop in the population occurred mostly out of human sight, but some Audubon Club members and bluebird enthusiasts in the Northeast became alarmed and got together to form bluebird societies. The passion for bluebirds in New York was high. After all, the state bird was about to become extinct.

The bluebird breeding box became a rage and they began to be put up on posts in great numbers. A Montauk resident, Kim Hicks, got a hold of a bluebird nesting box plan that featured a removable roof and started building them in his basement. He also made a hole that was just large enough to allow entry of the bluebird body, but was too small in diameter for flickers, crested flycatchers, sparrow hawks, owls, and other local hole nesters. These houses were put up on posts four to five feet off the ground not just anywhere, but in hedgerows between fields and along forest edges that bordered grassy tracts. The East Hampton Airport was a perfect starting place, as were golf courses and some local parklands.

The East Hampton Town Natural Resources Department joined the new South Fork Natural History Society to start a bluebird restoration project. Kim Hicks made the boxes; we put them up. The airport grounds were the start for bluebird nesting trails, but other areas were added piecemeal here and there, even along local road shoulders, until, by the year 2000, more than 100 boxes were up and monitored regularly.

The efforts proved not only profitable for the local bluebird population, but also for other box nesters such as tree swallows, house wrens, and a few chickadees. In the beginning Kari Lyn Jones of SoFo led the volunteers, later Joseph Giunta took over. He has been leading the effort for at least 20 years now with increasing success as the years roll by.

Since the beginning of 2005, the 1,101 bluebirds produced by more than 200 pairs of bluebird adults have fledged from the 10 sites monitored, with the large majority coming from the airport boxes. In 2009, the airport boxes began to be marauded by raccoons and an increasing population of southern flying squirrels, which were absent from the South Fork until early in the new millennium. Joe has been installing improved baffles on the posts to stymie raccoons and has moved the boxes farther away from the forest edge to better keep the flying squirrels at bay. Thus, since the beginning of year 2016, production has improved at the airport from zero fledges in 2015 to 93 to 112, or 416 altogether, for a yearly average of more than 100.

Joe Giunta and the Town of East Hampton deserve a very big round of applause for the fine work all these long years to increase the local bluebird and tree swallow population many times over.