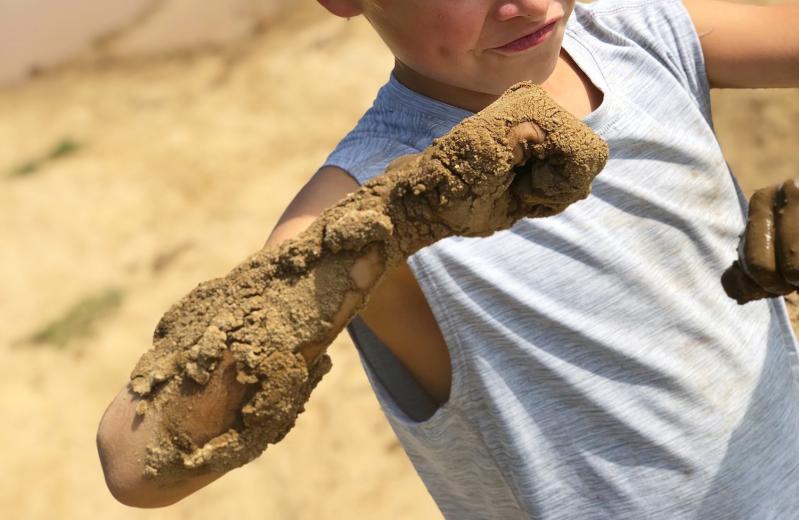 Is there some truth to the notion that kids need to "eat a little dirt" in order to build strong immune systems? Dr. Joshua Potter considers it in his column this week.
Carissa Katz
By Joshua Potter, D.O.

When I was growing up, my best friend delighted in informing me that the reason I was sick all the time and he seemingly never had so much as a sniffle was because my parents wouldn't let me simply be a kid as his did, which apparently entailed eating dirt as a toddler. His argument was that you needed some sort of constant immune challenge in order to grow up strong and healthy, and that over-parenting had robbed me of that opportunity.

Recently, this same concept came up in the context of the Covid-19 pandemic and our efforts to battle it with such measures as masks, hand washing, and social distancing. The Centers for Disease Control reported last month that the number of influenza infections in the United States for the 2020-21 season numbered just a little over 2,000 -- compared to over 38 million reported cases the year before.

Surely such a drastic drop is a good thing, but does that level of protection mean our children are missing out on needed immune challenges in the form of everyday sniffles and run-of-the-mill viruses that would help them develop some sort of lasting immunity and protection?

On the one hand, the thought is tempting and may have some merit to it. A study from Hullegie et al. looking at children in day care in the Netherlands and published in 2016 in Pediatrics, the journal of the American Academy of Pediatrics, showed a relationship between first-year attendance in day care and an increased number of acute gastroenteritis infections (stomach bugs, typically viral, that can cause vomiting and/or diarrhea).

Importantly, however, there also appeared to be relative protection in this group against the organisms causing these illnesses, and it lasted at least to the age of 6. Clearly, some sort of benefit does come from going out into the world and engaging with the micro-organisms waiting to be found in the dirt of playgrounds and on the snot-covered tables in classrooms.

However, as in most aspects of medicine, the answer may not be so cut and dried. Consider the fact that in 1900, pneumonia and influenza, tuberculosis, and enteritis with diarrhea were the leading causes of death in the United States. These all represent infectious causes of illness brought about by various viruses and bacteria, and at that time, children under 5 represented about 40 percent of all deaths from those infections. By 1915, the first year that data for such were reported, infant mortality was about 100 deaths per 1,000 live births, a terrifying number that thankfully seems nearly impossible to fathom today in a first-world country.

What led to the dramatic, world-changing drop was, of course, the development of modern medicine: the knowledge of germ theory and the simple importance of hand washing, the ability to treat pneumonia and tuberculosis with antibiotics, and the chance to protect against some of the more virulent forms of infectious diarrhea in childhood with such things as vaccinations against rotavirus.

The recent Covid-19 pandemic puts this question in sharp context, as many have argued that the very low overall rate of illness and death among children means that they should be allowed to live their lives, not be locked away out of fear of infection. This should be tempered against the fact that some of the children who do get sick get very, very sick with the multi-system inflammatory syndrome, and some of those die. There is no way of knowing as we let our children venture into the world which encounters with micro-organisms will be relatively benign and lead to increased immunity, and which have the potential to be devastating.

Thankfully, medicine has evolved to the point that health care providers can often discern between the two and therefore determine when to treat and when to let the incredible human immune system work its wonders and fight off an illness, but there are times it is so very difficult to distinguish between the two, especially during a pandemic like the one we have lived through in the last year.

That is why I lean toward moderation, trying to give my children the freedom in most situations to roll in the dirt and play with snotty friends but balance that out with regular medical checkups, routine vaccinations, and stricter vigilance in times of outbreak, where the sure knowledge that masks and hand washing can work to keep them alive drastically increases the likelihood that I will not have to suffer the same sorrows of a parent 100 years ago.

Joshua Potter, D.O., oversees the Shelter Island office of Stony Brook Southampton Hospital's Meeting House Lane Medical Practice. He specializes in family and neuromusculoskeletal medicine. Opinions expressed in this column are his personal and professional views and not necessarily those of his employer.