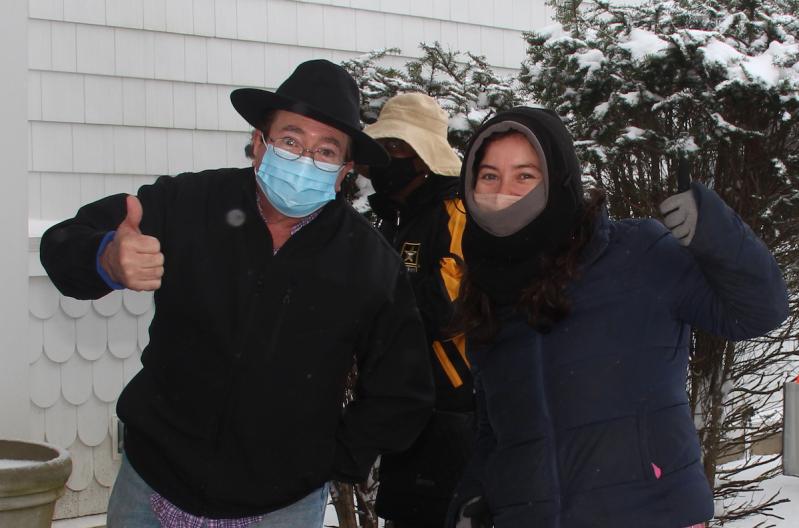 At a pop-up vaccination clinic overseen last month by Organizacion Latino-Americana of Eastern Long Island, over 250 people from communities of color received their first doses of the Covid-19 vaccine.
Durell Godfrey
By Jamie Bufalino

As the rate of Covid-19 vaccinations among New York State's Black and Latino residents continues to lag far behind that of their white counterparts, according to data from the state, the Rev. Walter Silva Thompson Jr. of the Calvary Baptist Church in East Hampton, the Rev. Tisha Williams of the First Baptist Church in Bridgehampton, and Minerva Perez, the executive director of Organizacion Latino-Americana of Eastern Long Island, said the discrepancy is due primarily to a lack of access to the vaccine.

On Long Island, the discrepancy is even more stark. "On Long Island about 11 percent of the population is Black [and] only 5 percent has taken the vaccine," Gov. Andrew M. Cuomo said on Monday in a speech at the State University at Old Westbury, where a state-run mass vaccination site is scheduled to open tomorrow. Hispanic people make up nearly 17 percent of the population, he said, and only 8 percent have been vaccinated.

The percentage of deaths due to Covid has been far greater in communities of color because of a disparity in access to health care, Mr. Cuomo said. "When it comes to the vaccine, we have to correct that injustice." One of the key factors contributing to the discrepancy in vaccination rates among Black and Latino New Yorkers, he said, was a leeriness about the safety of the vaccine. "We need the Black community and the Hispanic community to come forward and have confidence in this vaccine," he said. "There's a trust problem in the Black community. They don't trust the system. They don't trust the federal government. . . . I am asking faith-based church leaders, pastors, let us use your church as a pop-up vaccination site."

Mr. Thompson and Ms. Williams said a representative from the N.A.A.C.P. had asked if their churches could be used as a site for a state vaccination clinic and both agreed, but there has been no follow-up from the state. "It's unfortunate that Calvary Baptist has not been used as a vaccine site," said Mr. Thompson, who noted that the First Baptist Church of Riverhead has held a pop-up clinic. He had advised parishioners to seek a vaccine there, he said.

Some members of his congregation had been initially hesitant about the vaccine, and, to ease their concerns, he had a friend who is a medical professional at Emory University Hospital hold a question-and-answer session. "That was very helpful," he said. And when he got vaccinated at Nassau Community College, he posted a picture of it on the church's online message board. "They've seen that I have not had a negative reaction to the vaccine, and a lot of them have changed their minds," he said.

Access to the vaccine, however, is an ongoing hurdle. "There is inequality in the allocation," he said.

"I have not heard any hesitancy about taking the vaccine from members of my community," said Ms. Williams. "It's been the opposite, people have been eager to get vaccinated because they want to gather together and come into the church building again."

That her church and others like it have not been afforded the opportunity to serve as a vaccine site, "I think is very telling," she said. Given that communities of color have been disproportionately impacted by the pandemic, "You would think, given the numbers, there would be more urgency to provide access. It's a little disheartening."

Still, she's determined to remain optimistic. "I understand the distribution is a herculean task, and there's still such a long way to go, so it could still be in the works," she said. "I've been hopeful, and I'm still hopeful."

Vaccine distribution would be more equitable if it were managed by county and local officials who are better acquainted with the needs and concerns of their communities, said Ms. Perez. At the height of the pandemic last spring, for instance, landscapers were among the few professions still allowed to work, and, on the East End, they were basically essential workers, "and yet, now there's no eye to including the landscape community among those the state deems eligible for the vaccine," she said.

Although there is a bit of hesitation about the vaccine in the Latino community, "it's definitely much more about access," said Ms. Perez, who, last month, organized a pop-up clinic for people from communities of color at Most Holy Trinity Catholic Church in East Hampton. "Within 30 hours we were fully booked," she said. "When people hear we might have access to the vaccine, our phones don't stop ringing."