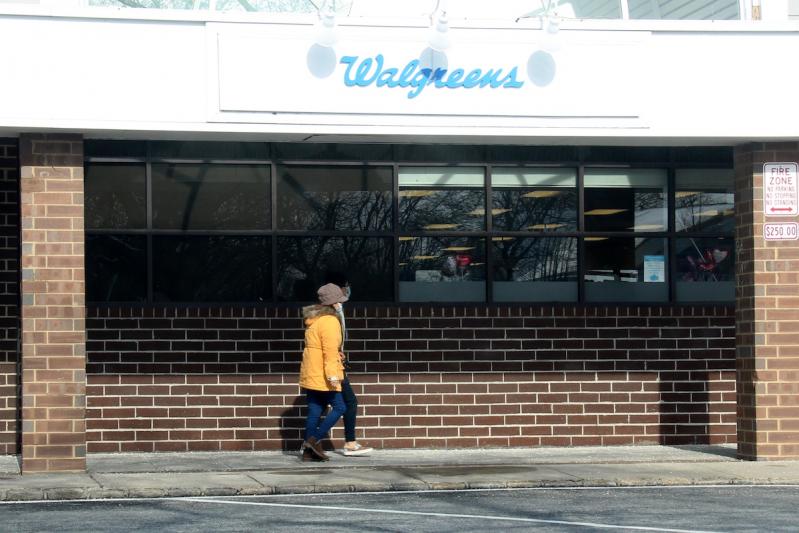 Some East Enders have had success booking Covid-19 vaccine appointments at the Walgreens store in Bridgehampton. No appointments were available there as of Wednesday morning, but "appointment availability updates hourly," according to the website.
Durell Godfrey
By Jamie Bufalino

Frustrated by an inability to get a Covid-19 vaccination close to home, South Fork residents have been traveling by road and sea to try their luck elsewhere, with some having far more success than others.

Last week, Britta Le Va, an East Hampton resident, used the CVS drugstore chain's website to book vaccination appointments for her and her husband at a branch in Waterford, Conn. A few hours and a late-morning ferry ride later, they were in a long line of people waiting to be vaccinated. Ms. Le Va made her way to the front to see how long the process would take when two officers from the state's Health Department arrived and informed an elderly couple who were also from the East End that they were ineligible to receive the vaccine because they were not Connecticut residents. According to Connecticut's guidelines only those who live or work in the state can receive a vaccination there.

Ms. Le Va explained to the store manager that they had had their appointments confirmed online, but was told that was a mistake caused by a glitch in the system, she said. As recently as Monday, the CVS website was still redirecting East End residents seeking vaccinations to the Waterford store, as opposed to ones on Long Island. "None of your selected vaccines are available nearby," it said Wednesday.

It was "unbelievably upsetting," Ms. Le Va said of being turned away. About 10 other people from the East End were on line that day and had been turned away as well, she said. The couple spent nearly $200 dollars on ferry tickets, and traveled for about nine hours to no avail, she said. The trip also unnecessarily put their health at risk, because they went from quarantining to being among strangers on the ferry and on line. "How this was handled doesn't sit right with me," said Ms. Le Va. She contacted CVS's legal department seeking to be reimbursed for the money she had spent, but was rebuffed.

A month ago, Dan Rizzie, a North Haven resident, was in a "computer hell" of his own, attempting to book an appointment at the New York State-run vaccination site in Stony Brook only to have the system repeatedly crash. He and his wife, Susan Lazarus-Reiman, have doctors who work at Northwell Health medical facilities, and last Thursday, Ms. Lazarus-Reiman was up at 3 a.m. attempting to book appointments for herself and her husband on a Northwell website. She found a facility on Staten Island that had appointments 15 minutes apart, and immediately screamed, "Dan, go get your Medicare card as quickly as possible," he said.

The couple drove to Staten Island on Tuesday, and got vaccinated without a hitch. They arrived 45 minutes early but were ushered in immediately, he said, and were even able to park in front of the "state-of-the-art" hospital. They were also given appointments to receive a second dose of the vaccine. "It was as efficient and beautifully run as anything I've participated in," said Mr. Rizzie. "It was almost enjoyable."

Kathryn Perry of East Hampton had been attempting without success to use New York State's "Am I Eligible" website to book an appointment at the Javits Center in New York City, and had been contemplating traveling to Plattsburgh upstate to another state-run site as well. Then, after a Facebook friend had suggested scheduling an appointment on the CVS website at 12:10 a.m., she booked a slot on Sunday at a store in Manorville. "I just kept refreshing and it popped up," she said. "I think it's just a crap shoot." A friend had also been successful on Monday booking an appointment at the Walgreens store in Bridgehampton, she said. No appointments were available there as of Wednesday morning, but "appointment availability updates hourly," according to the website.

Despite her success, Ms. Perry said the need to travel to get the vaccine is "screwed up" particularly for older people. Dorothy Artenberg, a Wainscott resident who, along with her husband, is in her 90s and no longer drives, echoed that sentiment. She has been so angry about not having access to a vaccination that she called Assemblyman Fred W. Thiele Jr. to express her dismay. He told her that local drugstores would soon be offering them, she said. "Years ago, when it came to getting the flu shot, they never neglected us," said Ms. Artenberg. "But those days are past."

On Tuesday, Gov. Andrew M. Cuomo said that 11 new "community based pop-up vaccination sites" would began operating this week and that more would be added each week in different locations. On Long Island, people will have a chance to get a first shot at the Magnolia Center in Long Beach Thursday and at the Gerald Ryan Outreach Center in Wyandanch Friday. The same pop-up sites will be set up again when it's time for people to get their second vaccine doses, the governor's office said.

Meanwhile, after a mid-January spike in Covid-19 cases statewide following the December holidays, the number of new daily cases and the percentage of positive tests continues to drop. The statewide positive test rate reported on Tuesday for results received Monday was 5.12 percent; the seven-day average had dropped to 4.38 percent, the lowest since Dec. 1. Long Island's seven-day average that day was 5.36 percent, and Suffolk County's was 5.4 percent.