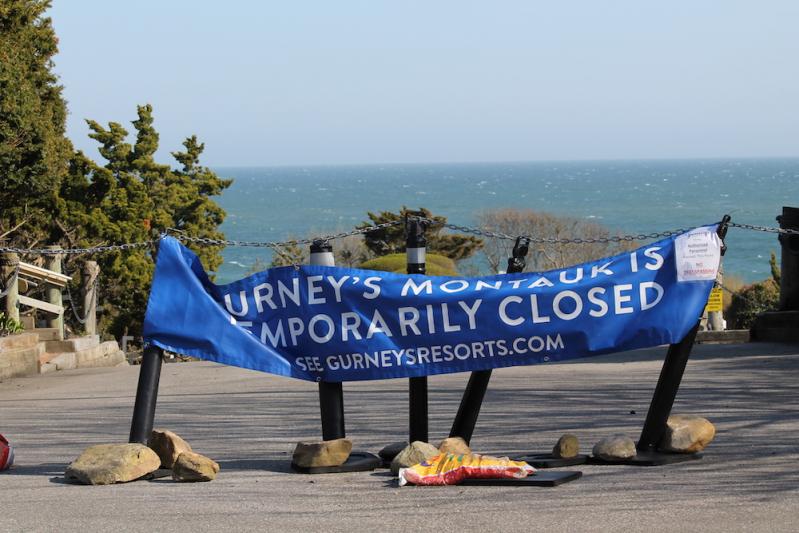 With Memorial Day weekend looming and amid mounting concern about crowding during the Covid-19 pandemic, the East Hampton Town Board wrote to Gov. Andrew M. Cuomo and the New York State health commissioner last Thursday to ask that the state prohibit resorts and tourist accommodations from reopening until the Long Island region reaches the third of a four-phase reopening of activity.

"A summertime influx of people into our area has the potential to cause renewed outbreaks of Covid-19 and reverse the progress our area has made in reducing spread of the disease through weeks of staying at home, quarantining, and following precautions in public," board members wrote to the governor, according to a statement issued by the town on Monday.

"During this pandemic, the challenge is even more acute and the stakes even higher," the letter states. "As town leaders, we are hearing pleas from our residents to take action to protect them. We are planning, as best we can, for the implementation of additional Covid-19 safety and control measures. But we fear that adding hotel and motel visitors to the mix will simply overwhelm our town, creating an untenable, and avoidable, surge in the ongoing public health crisis."

"We are still not at a point where nonessential travel should take place," the letter adds, specifically citing Montauk as a location where resources and personnel could be overwhelmed by crowds.

Word of the letter was met with dismay by business owners, particularly in Montauk. "Montauk, being a tourist destination with a limited season, will be economically devastated by this delay," Lewis Gross, an owner of 668 the Gig Shack, said in an email to the board on Monday. "The viral curve has lowered and many believe the time for a controlled reopen is now!"

Calling in to Tuesday's town board meeting, Steve Kalimnios, who owns the oceanfront Royal Atlantic resort and adjacent motels, said that business owners "feel we were blindsided in what took place." He said he was mindful of the difficult position the town board is in, but complained that it is "asking the governor to reclassify what is essential to be nonessential, or move it to a later phase."

Another Montauk business owner was more blunt. "The longer we flatten the curve" of Covid-19 infection, he said, "the more financial disaster is building." He would do everything possible to keep employees and customers safe, he said, but without "some leeway to start making money, forget about next winter. I won't be here in August."

Five of the state's 10 regions began the first phase of reopening on Friday, having satisfied seven criteria necessary to protect public health as measured by metrics such as rates of infection and hospitalization, and hospital capacity.

The Long Island region has yet to satisfy the criteria for reopening and remains subject to the governor's New York State on Pause executive order through at least next Thursday. The governor initially referred to reopening hotels and motels as part of the third phase of a regional reopening of business, which can proceed only if there is no evidence of a Covid-19 resurgence.

But the Pause order, the board wrote, states that "'hotels and other places of accommodation,' without further detail or limit, remained on the governor's list of  'essential businesses' that were allowed to continue operating throughout the shutdown."

The governor's New York Forward guide to reopening the economy states that "when phasing in reopenings, regions must not open attractions or businesses that would draw a large number of visitors from outside the local area."In his daily briefings, he has often referred to the peril presented by an "attractive nuisance," which he defined as a place or event likely to draw crowds.

The governor said on Friday that state beaches will open, with restrictions, tomorrow in advance of Memorial Day weekend as part of an agreement with New Jersey, Connecticut, and Delaware, and that local municipalities can make decisions regarding their own beaches. Town, village, and county plans with respect to beaches are covered elsewhere in today's paper.
--
This article has been updated since it originally appeared online.

Mashashimuet Park's History and Future
A Conference for Young People to Create Solutions
Get Outside, Get Moving
END_OF_DOCUMENT_TOKEN_TO_BE_REPLACED