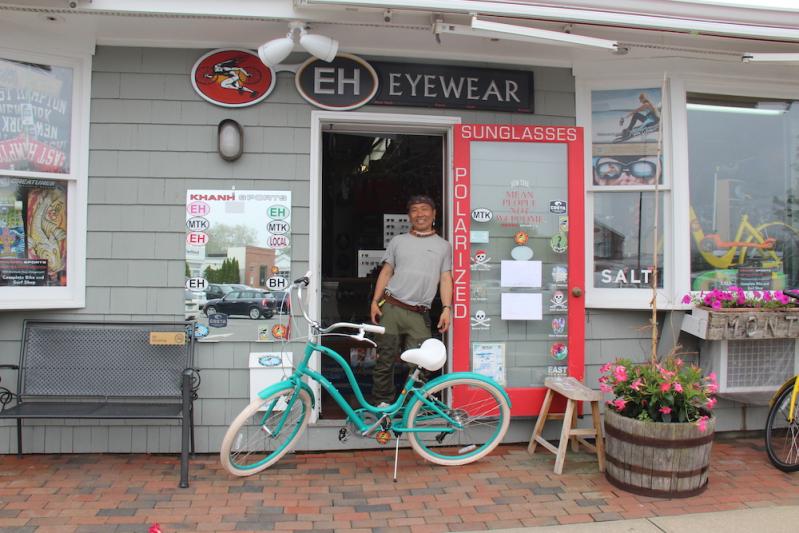 The first phase of reopening for East Hampton Village retail stores, which have been allowed to provide curbside pickup since May 27, has yet to bring in a steady stream of customers, according to shopkeepers.

"I would call it a trickle more than a river," said Valerie Smith, the owner of the Monogram Shop, who has been busy boxing up shipments of products for orders that have been placed online and by phone. The items in high demand at her shop are hand towels, "so I guess that means people are washing their hands," she said, but customers have not been clamoring to retrieve them in person. She's noticed an abundance of open parking spaces on Newtown Lane and in the Reutershan lot, which she said tells her "people are still tucked in and not meandering around the village."

"We haven't done any curbside per se; I've just been in to do web orders and that's about it," said Sarajean Bennett, the manager at the Shoe-Inn, on Friday. "We have eight other locations in Connecticut and New Jersey and we're waiting to see how they do. I heard yesterday that one of the stores in Connecticut did pretty well with curbside."

Nerissa Berman, the manager of the Clic clothing store, said she was "just happy to be opened up," and although her customers were still shopping remotely, she was optimistic that people would soon start taking advantage of curbside pickup. "It's only been a couple days," she said.

At the Clic home goods store, however, business was brisk. "People have been waiting to get closer again and talk to us, and yesterday they were like knocking the door down. We had a lot of sales," said Sabine Tulp, the manager. The store's big glass windows and large showroom have been drawing in passers-by. "You can look in and see a lot of things, so we even sold some art pieces," she said.

Colleen Moeller, the owner of the Petit Blue children's store, has been using Instagram to generate sales during the shutdown. "I'm doing story after story after story," she said referring to one of the posting options offered by the social media platform. That has remained the main source of customers in the first week of reopening, she said, but she's well-prepared to accommodate those who show up in person. She's allowing customers to pay for items by using Venmo, a mobile payment app, and she intends to add a fantasy element to curbside pickup by delivering orders while dressed up in shark, lobster, and dinosaur costumes. "It's not just going to be, 'Do you want a pickup, it's who do you want to be there when you pick it up?? " she said.

The pandemic continues to be especially hard on businesses that don't provide essential items, said Ms. Smith. "There's been pandemonium at the hardware store, but if you don't have food or booze, and you're not a hardware or drug store, who's interested?" The shutdown of public gatherings, including everything from dinner parties to charity galas, has made it unnecessary to buy new clothes or shoes. "People have been telling me how much money they've been saving because of the pandemic," she said. "No one's going anywhere. Until parties start to percolate, business won't be booming, and I don't see that happening any time soon."