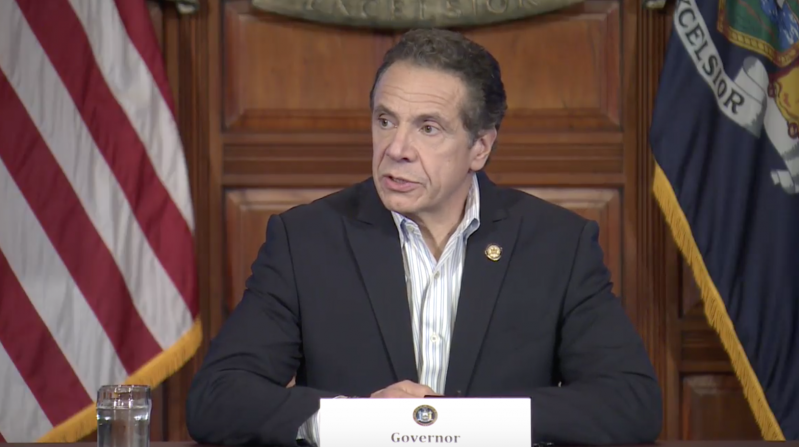 Gov. Andrew M. Cuomo during his morning briefing on COVID-19 on Sunday
By Christine Sampson

New York State Gov. Andrew M. Cuomo on Sunday extended the N.Y. on PAUSE mandate through April 15, meaning two more weeks of social distancing in public, no gatherings or celebrations, and continued closures of all nonessential businesses. He specifically said religious gatherings like Easter services and Passover Seders, which would normally take place in the coming days, "are not a good idea."

As of Sunday, cases in the state were doubling every six days; earlier this week they were doubling every four days. Still, COVID-19 diagnoses continue to roll in. The statewide case count rose to 59,513 by Sunday morning, up from about 52,000 on Saturday. About 172,000 people have been tested so far.

Later in the day, Suffolk County Executive Steve Bellone announced that the county as of Sunday had 5,023 confirmed cases of COVID-19. Three more virus-related deaths were reported, bringing the county total to 40. Among them was a Southampton man who died at home on March 26. He was in his 60s and had underlying medical conditions. Also, a man in his 30s who lived in Babylon Town died on Saturday. The youngest person to die in the county so far, he too had underlying medical conditions.

"It has been agonizing for families to go through this," Mr. Bellone said. "Today in Suffolk County we have a reminder that . . . this disease attacks everyone of every age, and everyone can transmit it."

The number of hospital beds in Suffolk has risen very slowly, Mr. Bellone said, up to 2,693 in the last few days. Hospitals are operating under Governor Cuomo’s mandate to boost capacity, with a goal of reaching a 100-percent increase. On Sunday, the governor called for public and private hospitals to become more unified in their operations rather than operating in individual "silos."

"That wall has to come down, that theory has to come down," Governor Cuomo said. "This is all hands on deck. One hospital gets overwhelmed, the other hospitals have to flex to help that hospital and vice versa."

East Hampton was reported to have 22 cases on Sunday, up by two from Saturday. Southampton now has 79, an increase of seven.

A county map of cases by hamlet and village, released in the last few days, was a test version that may not have up-to-date data, Mr. Bellone said Sunday. The draft map can still be seen online by clicking here.

The Southampton School District has reported that two of its staff members have tested positive for COVID-19. "One staff member has not been on the school campus since March 11, 2020, and the second was last in the district on March 18," said the district superintendent, Nicholas Dyno. "Due to laws related to HIPPA, as well as those with regard to student and staff privacy, I am unable to provide any further details."

In a letter to its residents, Southampton Village urged people to "stop, look, and listen."

"Stop to think about what is going on around you," the letter says. "Look for ways you can help your community. Listen to what your government is asking you to do. Your actions could save someone's life."

The village said it does not want to close its parks and beaches but advised people they should do their part to keep public spaces "safe and clean so that we are not forced to take action for the health and safety of our community."

East Hampton Samples Are a Crucial Contributor to Lyme Test
Ready to Adopt a Pet? ARF Is Ready, Too
Guild Hall's Curator Visiting Studios Virtually Through June
Seeking Stories and Images From the Time of Covid
END_OF_DOCUMENT_TOKEN_TO_BE_REPLACED