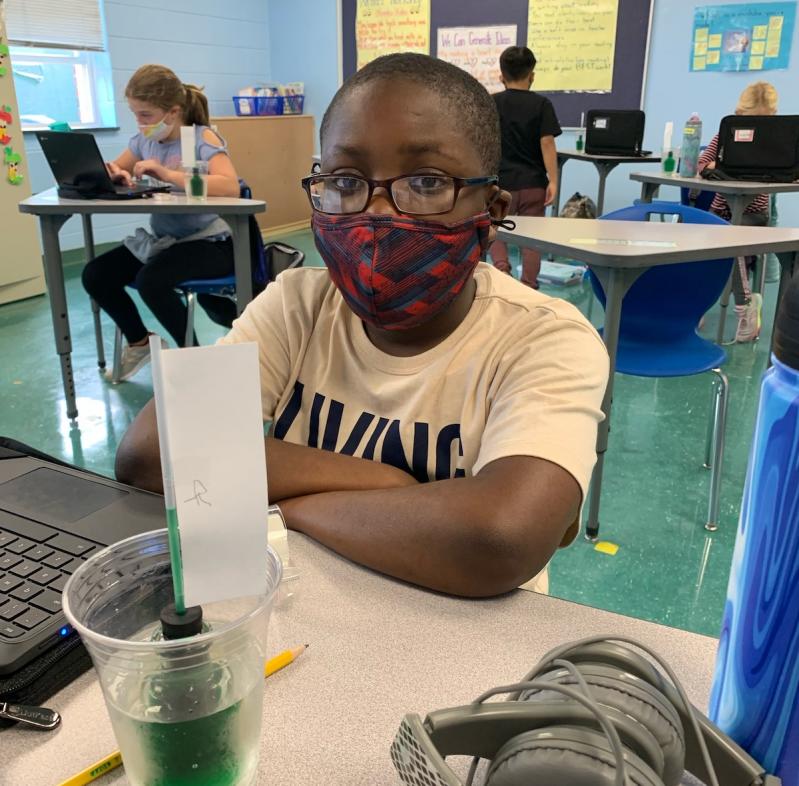 D'mitri Gomes is a fourth grade student at the Springs School.
Sean Knight
By Christine Sampson

From online laboratory simulations to individual sets of science supplies to constant cleaning of equipment, teaching and learning science amid the Covid-19 pandemic has been one big experiment in itself for local educators and students.

In normal times students would be able to work in groups, clustered around a table sharing lab equipment like beakers, burners, and microscopes — but these are not normal times.

"Everyone in our department is trying different things and seeing what works," Clint Schulman, the lead science teacher at Pierson Middle and High School in Sag Harbor, said in an interview. "The hard part is that you have the kids in school doing a lab and you're trying to find work for the kids at home to work on that's not necessarily busy work, but something that's meaningful. It's a lot of work, that's for sure. I've been teaching for over 20 years and I feel like a new teacher this year."

Students have noticed the differences. But for Peyton Sadowski, a Springs School fifth grader, science is still a lot of fun.
"When we would usually have four people at a table, we'd have one basket or bin of everything to share," she said, "but now we all have our own bin, and we do some stuff virtually."

\For example, Peyton said her class played a videogame-like simulation in which they helped ice bugs survive using their Chromebook computers. "We do spend a lot of time on Chromebooks," she said. And they recently did water quality testing, examining dissolved oxygen in clear water and in water where goldfish were swimming, but it was hard to compare test results to other students' experiments because they are sitting so far apart.

"It's definitely different because when we were in groups, if you forgot something, you could just ask a teammate, but not anymore," Peyton said.

Her teacher at Springs, Sean Knight, said before Covid hit, the whole elementary science curriculum "was one big, hands-on program." There are some great virtual lab experiments out there, he said, and "there are times when they have a place . . . but we're trying to limit how often they're on the computers."

Normally, Mr. Knight would take his classes to places like Louse Point for water quality testing and marine life observation as part of an annual program called A Day in the Life of the Peconic. Not this year. "We can't actually go and do it," he said.

Generally, science teaching in Covid has a cost — more supplies and materials for students to use on their own instead of in groups, and the teachers' own time. Joe Malave, a middle school science teacher and department chairman at the Montauk School, finds himself loading up mobile carts with supplies he'll take to each classroom instead of having students crowd the hallways to switch classes themselves.

"My number one challenge is time management," Mr. Malave said in an email. "Planning enough materials to load on a cart for a five-period stretch of science teaching is a huge challenge. Time loss due to me having to move the cart from one end of the building to the other is a problem, and logging in to access the publishing websites — digital access to curriculum materials — really cuts into teaching time."

Because of the pandemic, the Montauk students aren't able to engage in as much intensive research as they have in the past, and there will likely not be a science fair this year.

The infectious capability of the virus is ever present in Mr. Malave's mind, as is the students' general well-being. He said he tries to keep his classroom time management "loose enough to allow the development of the students' social-emotional needs."
At East Hampton High School, Chris Merkert, the science department chairman, said all the teachers are "trying to recreate their assignments for a way to present them in this new format. That is a tremendous amount of rewriting, but everybody is so positive, trying to do whatever we can to make it as normal and effective as possible."

Here's an example. Whereas Mr. Merkert's students would normally dip their hands into a "stream table" and arrange materials to understand how erosion works, that's not possible. However, he discovered a virtual Grand Canyon field trip from Arizona State University that does the trick.

"You put a kid in a sandbox, it's a kid in a sandbox. You go virtual and you just can't do that," he said. "They could watch from six feet apart . . . but we took our lesson and brought it into the Grand Canyon, using it rather than the stream table in the back of the room. That's the ultimate stream table, and it worked out really well."

Allie Mentuck, who teaches first and third-grade science at the Bridgehampton School, said teachers are taking their students outside as much as possible. In recent lessons about weather, the students made real-world connections between what they were learning and what they saw happening around them.

"If anything, Covid has made us more creative with how we're teaching it," Ms. Mentuck said. "I wouldn't say it's limiting us in any way. If anything, we are looking at what we need to teach and overcoming those obstacles with creativity."