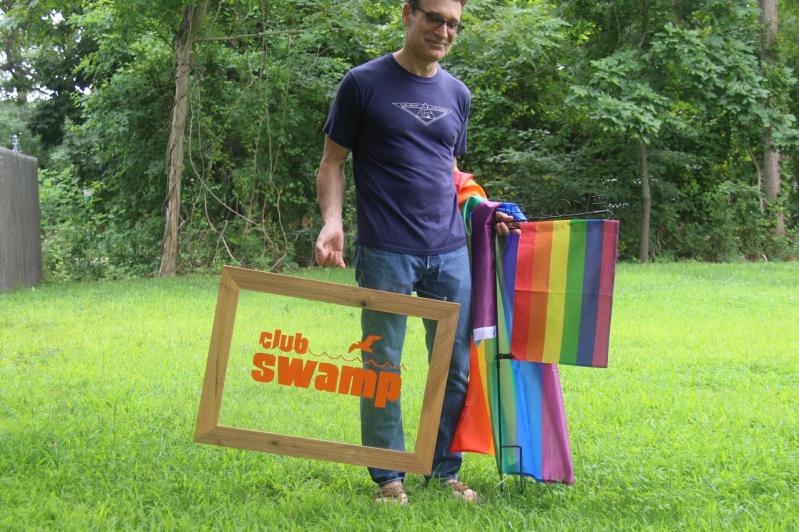 This Sunday marks a new, overdue, and outright joyous event in Hamptons history: the launch of its first organization devoted exclusively to Pride. That may seem hard to believe. Young people, especially, look at me incredulously when I mention this. “How can that be?” The Hamptons, after all, are a satellite-extension of New York City, one of the earliest LGBTQ+ hubs in the nation.

I felt the same way a year ago, my eyes boggling on a late August night when, in search of a name for the nonprofit I was seeking to incorporate, I looked up the owner of HamptonsPride.org — the perfect mirror of NYC Pride, the engine behind the biggest parades in North America — and found there was none. Instead the URL was staring at me, available. I checked my spelling; it was right. Then ran for my wallet, thinking this name-mirage would vanish before I could enter my credit card number into the request form. Minutes later, I bought it for a mere $15.

In the months that followed, I naively attempted to file the articles of incorporation myself. How hard could it be? Ha, well, pretty hard. Next I sought the assistance of lawyers, all with scary, indefinite fees. Then I sought the assistance of lawyers who worked pro bono, encouraged by countless friends who suggested, “There’s got to be some gay lawyer in the Hamptons who will be happy to help you.” But I quickly learned that no matter how happy a lawyer may be, when they do something for free one must be prepared to wait. In perpetuity.

Finally, I contracted with a company that specializes in incorporation, then waited again on tenterhooks to see if we’d get the name Hamptons Pride for the organization itself. Nycpride.org, I was surprised to find, was a URL of the nonprofit Heritage of Pride. That would be awful: Our foundation needed to be called something simple and memorable; it needed to have the same name as its web address.

When the news finally came in April that our company was a state-approved entity, my first question was, “You mean we got the name?”

The woman handling my case, Naomi, not as dumbfounded as I, was a fan of my enthusiasm. “You sure did get it, honey.”

Thrilling but telling: The name’s availability underscored a longstanding void and need.

There have, of course, been other LGBTQ+ groups out here — most notably the East End Gay Organization, spanning the just-post-Stonewall 1970s until it was finally subsumed into an arm of the UpIsland-based Network in 2010, many of its services and programs by then having been significantly reduced, and, subsequent to the affiliation, ground to a halt. EEGO, strong on advocacy and support in a time focused on legal rights and devastated by the AIDS crisis, became a social network of support and quiet celebration of Pride among its members on the East End. The Hamptons, liberal in some respects, was no Greenwich Village; people who wanted a parade made an exodus west in the last weekend of June.

And of course there have been Pride fund-raisers here, many. But virtually all of these have been hosted by organizations based elsewhere — mostly New York City. For decades they’ve tapped the moneyed Hamptons in July and August and run off with the loot — often for some very worthy causes and programs — to other parts of the state or country. Bravo, but also . . . thanks? What about us?

That’s an aspect of Hamptons Pride I want to stress: We’re a local, grassroots organization that intends to stay that way. Established by locals for the benefit of locals, all the money we raise will stay here for activities and programs for East End LGBTQ+ people and their allies — which we hope will one day include everyone.

Unlike some nonprofits, we are 100-percent volunteer. Despite many full, breathless days spent launching Hamptons Pride since the spring, no one’s getting paid. So far, we’ve netted over $40,000, with expenses well under 10 percent. Partly because local businesses have been so ready and generous with their donations of food, beverages, and services, but also because we realize it’s not grandiose events people want so much as to be brought together again.

While Hamptons Pride will ultimately become what East Enders need it to be, instinct tells me it will become known and beloved foremost as a social resource, an enthusiastic weaver of the many strands of the local population that have been separated for much too long.

Here’s a snapshot of how it began.

In my first act as a fiction writer who tended bar, I worked for 20 summers on the property that is now Wainscott Green, former home of the Swamp, the last and longest-running gay club in the Hamptons, for nearly a quarter of a century. And in some ways just by virtue of prolonged proximity, a part of my soul became tethered to that spot. After the Swamp and its short-lived successor, the Star Room, died, I’d pass the razed park ground where the club once stood on my way home from school and think, “Something has to be built there, some marvelous marker.” To reference “The Great Gatsby” again, as English teachers do, I was Nick Carraway, scaring up an audience for Jay’s funeral, the ground itself saying, “Look here, old sport, you’ve got to get somebody for me.”

In the spring of 2020 I read that the Town of East Hampton intended to dedicate one of a proposed series of benches to the “LGBTQ community” as an homage to the Swamp. Though offered with the best of intentions, the smallness and near invisibility of that idea brought me to the verge of tears. Clearly, people had forgotten or just didn’t know about the depth of the attachment so many East Enders still had for that ground.

In a laser-focused panic, I poured three weeks of research, heart, and soul into a historical essay for this newspaper called “What Kind of Bench?” reminding the old or enlightening the new of the rich gay history of Wainscott. It reached its perfect audience, getting the attention of members of the Citizens Advisory Committee, the Georgica Pond Foundation, the East Hampton Town Board, and, very importantly, lots of locals, young and old. Yes, the Green needed more than a bench in honor of LGBTQ+ people and their history. But what exactly would that be, who would create it, and, more to the point, who would pay for it and maintain it? Hamptons Pride was born.

It will surprise some, in this disco-bereft era, that the Swamp wasn’t the only gay club in Wainscott. The beloved Attic was just to the east, and for an overlapping decade people hazarded late walks along Montauk Highway between the two. Other gay-friendly restaurant-bars lived a bit to the west, the whole stretch, known as “The Miracle Mile,” comprising well over 50 years of precious East End LGBTQ+ history.

The old Swamp ground, the now-grassy site of the last gay bar standing, has become its repository, as well as a unique and remarkable opportunity to create a beautiful outdoor social area that connects the past and present. How many chances do we get for this kind of tangible poetry? Future generations of LGBTQ+ people and their allies gathering again on the very footprint of the club their gay forbears once called home.

Who exactly is it I hear when I pass by the park, asking me to get someone for them? Sometimes I think it’s Bill Higgins, the first owner of that property in 1976, who died of AIDS in 1990. Other times Brent Newsom, an early co-owner and head chef of the Annex until 1995. It could be any of thousands of people who had a haven there in the ’70s, ’80s, and ’90s. Or it could be history itself: “Get someone for me, before I’m forgotten completely.” That’s part of Hamptons Pride’s mission, to commemorate. The other is to celebrate.

We begin this Sunday with a tea-dance launch on the Green, followed by a retro disco night at the Clubhouse. With many more celebrations to come. We’re here, and so proud to be together again. Join us soon!

Tom House is a writer, teacher, bartender, and resident of East Hampton. And, just recently, the founding director and president of Hamptons Pride, Inc.