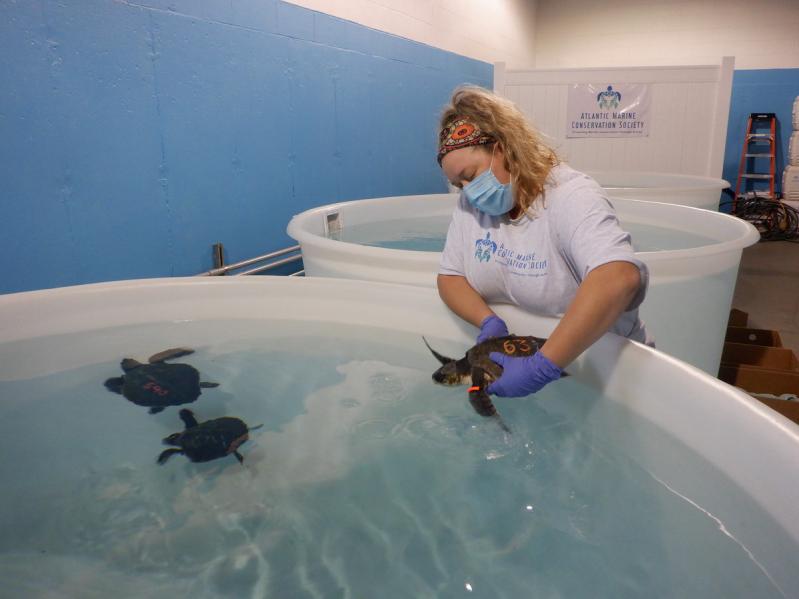 Kate Sampson, the fisheries stranding and disentanglement coordinator at the National Oceanic and Atmospheric Administration, organized transport to the facility from the New England Aquarium with Turtles Fly Too. The conservation society said its Specially Trained Animal Response Team picked the hypothermic turtles up at Gabreski Airport and admitted them to come up with a short-term care plan, after which they will be transported to another facility.

Cold-stun season occurs in the Northeast during the fall when water temperatures drop below 50 degrees, the society said. Some turtles become hypothermic or cold stunned when they stay in Mid-Atlantic and Northeast waters too long into the fall.

Initial symptoms include decreased heart rate, decreased respiration, and lethargy, followed by shock, pneumonia, and possibly death, according to the conservation society, a nonprofit research, response, and education organization.

In Cape Cod, the arm of the Cape often blocks turtles from warmer waters offshore and to the south. In late fall this year, volunteers took turtles along the coast back to Mass Audubon, where staff checked them for signs of life.

Between 400 and 900 cold-stunned sea turtles get stranded, alive and deceased, in the Northeast each year. So far in 2020 there have been more than 400 strandings, the society said.

“When we founded Atlantic Marine Conservation Society in 2016, it was always with the idea that we would help other stranding network members and fellow conservation organizations,” Rob DiGiovanni, the organization’s chief scientist, said in a statement. “Nothing we do is just about us. It truly takes a village to make a difference and we pride ourselves on being able to assist in stranding events such as these. Promoting marine conservation through action is absolutely a group effort.”