Project is months ahead of schedule, over budget 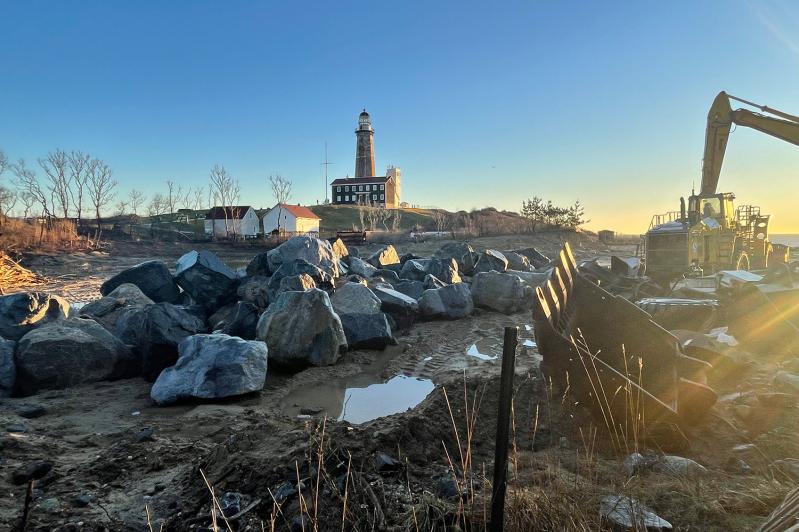 The main task of placing tons of boulders at Montauk Point to prevent further erosion and save the Montauk Lighthouse from certain ruination was completed in late December, well ahead of schedule.
Jane Bimson
By Tom Gogola

The new 874-foot stone revetment at Montauk Point will be completed six months ahead of schedule but with many more boulders than originally budgeted for.

The placement of stones for the revetment was “substantially completed at the end of December,” James D’Ambrosio, an Army Corps of Engineers public affairs specialist, said via email this week.

Now that all the stones have been placed — they were trucked piecemeal and over the Throgs Neck Bridge from Connecticut and upstate New York during construction — the remaining work at Montauk Point includes site cleanup, staging area restoration, and planting new vegetation on the now-barren site that is all but empty save for a few looming pieces of heavy equipment and a small pile of excess boulders.

A construction sign warns of falling boulders, but the boulders are now all secured along two long rows that make up the revetment. The orange construction sign itself appeared to be falling into the sea during a recent visit to the site.

It’s been a long and rocky road to save the Montauk Lighthouse from the ravages of erosion, said the Montauk Historical Society’s Lighthouse liaison Greg Donohue, who oversaw a much smaller-scale boulder-installation project in the 1980s.

“It’s been a very long, long 34 years to get to where we are,” he said. The two rows of fresh boulders that line up in front of Montauk Point were placed over the ones that were previously installed, he said.

Mr. Donohue’s work carried on from the literally groundbreaking work undertaken by the legendary preservationist Giorgina Reid beginning in 1970, who spent much of that decade physically terracing the cliff in front of the old World War II lookout tower that stands in front of the Montauk Lighthouse and installing native plants to hold the earth in place.

The Lighthouse, commissioned by George Washington and completed in November 1796, is listed on the National Register of Historic Places and as a National Landmark, thanks largely to the efforts of former Gov. Andrew M. Cuomo, Mr. Donohue said during a long explication of the politics and personalities that have animated a more than 50-year effort to save the Montauk Lighthouse. The latter designation was critical to getting federal dollars devoted to preserving the iconic tower.

At the time it was built, there were about 300 feet between the ocean and the tower. When Ms. Reid started her work, there were about 50 feet. Mr. Donohue says he marks Earth Day 1970 as the starting date for efforts to keep the Lighthouse from slipping into the Atlantic Ocean.

The Army Corps identified the Montauk Point project as in need of a new 800-foot-plus revetment back in 2005 and said the work was critical to “avoid the eventual total loss of the irreplaceable historic lighthouse complex.”

Congress got a report from the Army Corps in 2006, and then, in 2012, following Superstorm Sandy, environmental assessments were undertaken and fully completed by 2017, according to online Army Corps records and releases. When it came time to find the funding, said Mr. Donohue, leftover money from the $60 billion sent to New York to respond to damage from Superstorm Sandy was utilized.

Mr. Donohue, who says he is pretty cynical about government as a general rule, told The Star this week that thanks to the Army Corps and their contractor on the job, H&L Construction out of Bayshore, his cynicism has been replaced by awe, as he said the work undertaken at Montauk Point guarantees that the Montauk Lighthouse “is not going anywhere for hundreds of years.” (When the revetment project was approved and unveiled early in 2021, then-Representative Lee Zeldin said that the revetment would protect the Lighthouse and grounds for a still-impressive 73 years.)

Mr. Donohue noted that the job was undertaken “without any competing egos” — H&L’s role was the actual stone-setting, while the Army Corps was responsible for engineering and managing a $30.7 million project whose final budget is sure to be higher when the final accounting is undertaken.

Mr. Donohue said he believed H&L was the “best in the business” when it came to large-scale marine projects such as the revetment project.

The New York State Department of Environmental Conservation put up $15.4 million for the project. The Montauk Historical Society, which owns the Lighthouse, will pay for site maintenance when construction is complete.

The budget called for 65,900 tons of boulders — granite from the Adirondack region and pink granite from Connecticut — but the final amount was up to 120,000 tons, said Mr. Donohue. About 570 tons remain on site and may wind up being used to shore up an exposed and vulnerable area of the Lake Montauk inlet. During construction of the revetment, H&L also hoisted a World War II-era bunker that the Coast Guard had reportedly pushed down the cliff when it became a safety hazard, according to Mr. Donohue. The bunker will now be a feature on the Lighthouse grounds.

The Montauk Historical Society owns the Montauk Lighthouse, runs the museum inside the facility — the historical Fresnel lens is a favored feature — and manages the grounds. The United States Coast Guard has jurisdiction over the low-maintenance beacon in the cupola that still provides navigational guidance to ships.

Mr. Donohue noted that while H&L was hired to do the stone setting, the firm found itself having to complete ancillary work during the project. “They only got paid to set the stones,” he said, “but there was lots of repaving of the road that they had to do — that wasn’t in the original contract. The road would get washed out by waves and prompted H&L to spend about $3.4 million on an excavator and road-building machine, said Mr. Donohue.

Debbie Ryder at H&L said the company couldn’t comment for this story.

It is an open question what the final budget might be for the project.

“We had to make a few contract modifications during project construction,” said Mr. D’Ambrosio, “to account for different field conditions, including the need for additional stone quantity requirements, which did increase the contract cost. Final total quantities are currently being accounted; final costs will be determined during final contract reconciliation.”

Mr. D’Ambrosio noted that even though “contract completion was originally anticipated for October 2023, but is currently scheduled to be complete in early spring, there are no contractual savings for early contract completion.”