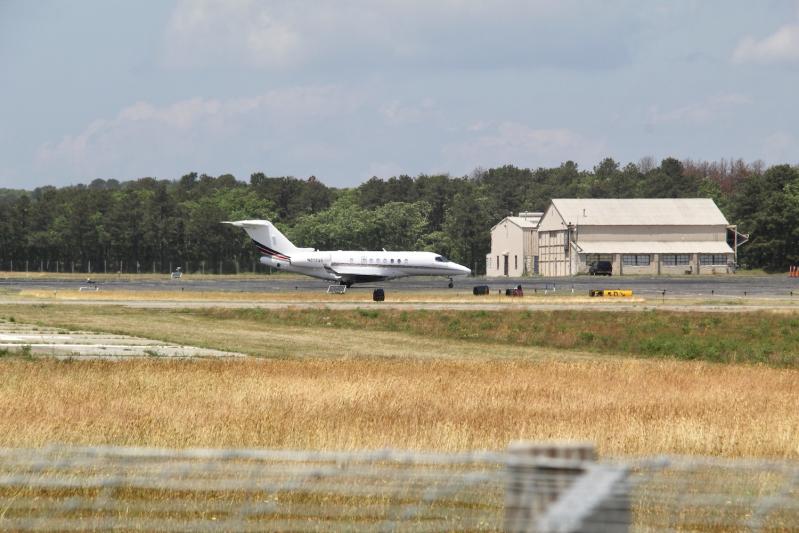 According to Jim Brundige, the airport manager, there have been nearly 5,000 fewer “operations” — meaning takeoffs and landings — from January to July of this year, than the same time period in 2021.
Durell Godfrey
By Christine Sampson

Informed that cumulative 2022 air traffic at East Hampton Airport was down by about 28 percent through July, members of the Wainscott Citizens Advisory Committee found themselves on Saturday asking, “Really?”

According to information provided to East Hampton Town and the committee by Jim Brundige, the airport manager, there have been nearly 5,000 fewer “operations” — meaning takeoffs and landings — from January to July of this year, than the same time period in 2021.

“It seems to me that as a layman, I’m hearing more.. . . It just doesn’t seem to add up,” said Barry Frankel, a longtime committee member who led the meeting in the absence of Carolyn Logan Gluck, its chairwoman.

East Hampton Town Councilwoman Sylvia Overby, the town board’s liaison to the committee, said on Tuesday that she had asked Mr. Brundige to review the numbers again and report back.

“These are probably pretty good numbers,” Ms. Overby said. “There might be some movement. We don’t count them; we have a company that counts them as they come in. But I know, to the Wainscott C.A.C., it’s going to feel as though there are more operations [flying] over them — because there are. There’s just not more operations, total, at the airport.”

She explained that the difference in 2022’s year-to-date numbers occurred mostly in the slower months of January and February. She noted also that “the routes have changed. [They] now are coming down the ocean access and cutting across over Georgica Pond.”

Of the 2022 numbers, 3,242 operations involved local pilots; 9,520 were from transient users. Of the types of aircraft flowing into and out of the airport so far this year, helicopters have accounted for approximately 31 percent, jets about 20 percent, and seaplanes about 9 percent.

The Wainscott C.A.C. was also told that the town has received many complaints about planes with advertising banners. Such planes are prohibited in Class Delta airspace, which covers East Hampton Village, Wainscott, and Sagaponack beaches, Mr. Frankel said, and the control tower will enforce that prohibition.

In other airport-related news, the Federal Aviation Administration announced on July 29 that the North Shore helicopter route, which requires civilian pilots to follow a path along Long Island’s northern shoreline, has been renewed. It was to have expired on Aug. 5.

“The F.A.A. finds it necessary to extend the rule for four years,” through July 29, 2026, the agency said. The report acknowledges the current litigation over East Hampton Airport’s future, saying, “given that there is no available timeline for resolution of the East Hampton Town Airport’s operating status and subsequent adjustments operators may make, the F.A.A. expects a four-year extension to provide [it] with sufficient time for such issues to resolve to evaluate any new traffic redirection and consider that evaluation in assessing the current rule.”

The complex status of the town’s possible airport closure — and its supporters’ counterefforts to keep it open — is tied up in litigation in the New York State Supreme Court system, before Justice Paul J. Baisley. As of press time this week, the court’s online record-tracking system did not list the next date the parties are to meet.