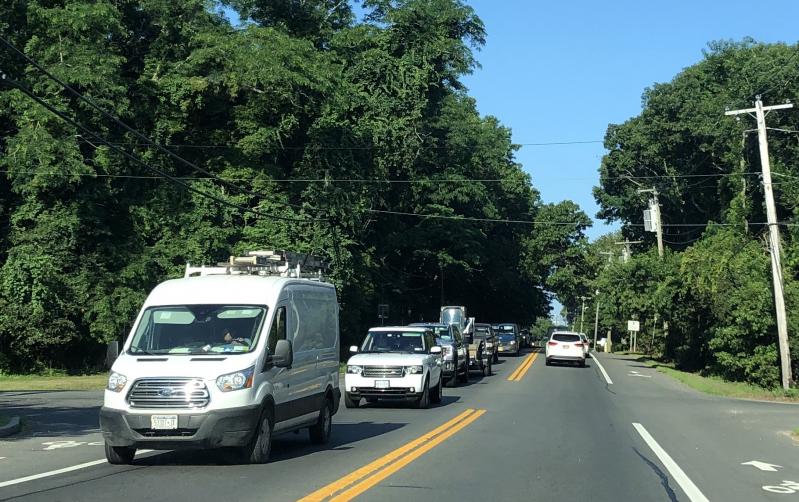 The morning "trade parade" heading east into East Hampton Town. Increased traffic as people commute from points west is one of the results of the shortage of affordable housing in town, notes legislation establishing a new Community Housing Opportunity Fund
Carissa Katz
By Christopher Walsh

A new affordable housing fund, to be paid for by a .5-percent real estate transfer tax, is headed for the November ballot in East Hampton Town.

After a public hearing during which around a dozen people including residents of the South Fork and housing advocates spoke mostly in favor, the East Hampton Town Board voted last Thursday to establish the Community Housing Opportunity Fund, to implement the .5-percent transfer tax, should voters approve it in November, and to send the proposition and an accompanying abstract to the Suffolk County Board of Elections for inclusion on the Nov. 8 ballot.

The Peconic Bay Region Community Housing Act, signed into law last year, authorizes the five East End towns to establish community housing funds. Should the referendum pass, the fund would become operational in January. The .5-percent tax would be in addition to the 2-percent-transfer tax that funds the community preservation fund.

The moves followed the board’s announcement in January of an All Hands on Housing initiative and multiple presentations this year, each underscoring the acute scarcity of affordable housing in the town. Jeremy Samuelson, the town’s planning director, told the board last month that one-quarter of households in the town are spending at least half of their income on housing, and more than 70 percent of renters and more than 33 percent of mortgage holders are spending at least 35 percent of their income on housing.

The code amendment establishing the fund notes that the town’s “unique demographics and economics” and proximity to New York City make it a “sought-after locale for luxury and seasonal vacation housing. The recent pandemic exacerbated the already high demand for existing housing as a growing number of people sought to relocate to East Hampton from more urban areas.” The town’s population also grew by one-third between 2010 and 2020, to around 28,000, according to the most recent census. A growing use of residential properties for short-term rentals has further reduced the stock of available housing.

The result of these conditions, the legislation notes, are longtime residents forced to leave the area, employers and volunteer emergency services agencies having difficulty finding and retaining personnel, increased traffic as people commute from points west, and people living in illegal or substandard conditions.

In addition to the .5-percent transfer tax, should voters approve it, deposits into the fund may include revenues of the town from any source, including general fund balances or surpluses, proceeds received from the sale or rental of housing produced from revenues of the fund, repayment of any loans issued from proceeds of the fund, gifts of interests in land or money, any state or federal grants for providing housing, and money received pursuant to the Long Island Workforce Housing Act, provided it is held in a single trust fund under the town’s control and specifically for constructing affordable work-force housing, or for acquiring land or rehabilitating structures for the same purpose.

Money from the fund could be spent on land and building acquisitions, town-led or public-private construction projects for sale or rent, rehabilitation of existing buildings, down payment and other financial assistance to buyers, loans to construct accessory dwelling units, creation of housing for employees of local businesses, purchase of individual units within existing multiunit housing complexes, and housing counseling.

Buyers of a property would pay the .5-percent transfer tax, with the first $400,000 exempt up to $2 million, beyond which the full purchase price would be taxable. First-time home buyers would be exempt.

The town board will establish an advisory board to review and make recommendations regarding the fund. It will comprise between seven and 15 residents of the town who will serve without compensation. It is to include a representative of the construction, real estate, and banking industries, and three representatives of local housing advocacy or human services organizations.

Mashashimuet Park's History and Future
A Conference for Young People to Create Solutions
Get Outside, Get Moving
END_OF_DOCUMENT_TOKEN_TO_BE_REPLACED