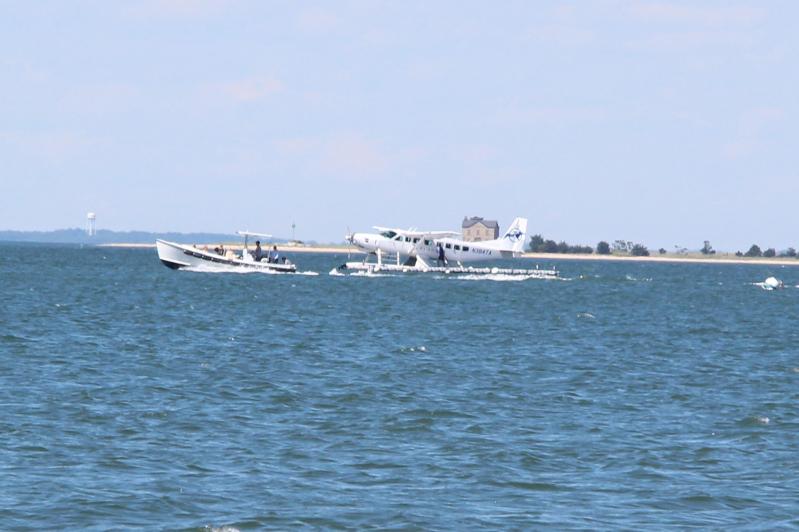 A launch departed from a floating dock several hundred yards off Sag Harbor’s Havens Beach after passengers got off a Blade seaplane there last Thursday.
Durell Godfrey
By Christopher Gangemi

“A helicopter banned in East Hampton could become a seaplane landing in Sag Harbor,” Aidan Corish, a Sag Harbor Village trustee, said at a packed village board meeting Tuesday night, as he urged the village to gain more control over seaplane operations in waters it oversees.

Approximately 50 people attended the meeting at the firehouse on Brick Kiln Road, which was also streamed live.

Ken Deeg, who has run the Sag Harbor Launch service for the last 15 years, brought the topic up during the public comment portion of the meeting. He said he has serviced seaplanes since as far back as 2005, but in the last five years, they have become more frequent.

He described a personal effort he made with the seaplane operators to limit their impact on the village and nearby residents. The biggest problem for many years, he said, was that pilots didn’t know exactly where to land. He said that, coupled with the difficulty of safely getting a boat under the planes’ wings, led to what he referred to as the “now infamous” seaplane platform, which was paid for by the seaplane operators.

The float, he said, let seaplanes know exactly where they should land. The seaplane operators had since become very cooperative about moving their routes over the water, according to Mr. Deeg. Blade and Tailwind, he said, currently fly to the end of Orient Point, and then back toward Sag Harbor over water. Prior to the floating dock, he said, they flew over the North Fork or North Haven. They no longer fly over residential areas, he said. “I thought this was an extreme win,” he said to light laughter, “and that we couldn’t possibly get any complaints.”

If the village were to decide to remove the platform, as Mr. Corish has suggested, Mr. Deeg said it would turn the clock back, and that planes would continue to land, only in waters outside of the village’s jurisdiction.

He concluded by urging the board not to pass any laws that would force him to discontinue safely transporting seaplane passengers from the floating dock.

Mr. Corish was skeptical. He doubted that planes were using an all-water route to and from Orient Point. As a pilot, he noted that a plane’s landing orientation would change depending on the wind direction.

He said planes had a right to land in state waters, but that the village could rescind the permission for them to taxi in its waters.

Mary Ann Eddy agreed with Mr. Corish and said, “there may be times when seaplanes fly off that nice pattern” over the water.

Ruby Jackson, a Sag Harbor resident, said, “Flying planes overhead indiscriminately does not make a great town in my opinion.” Howard Mitchell, another resident, noted the amount of space that seaplanes require for takeoffs and landings.

Mr. Deeg said that the question wasn’t whether there would be more planes landing in Sag Harbor. “They’re either going to land outside the village jurisdiction or land safely inside. The platform is a safety thing.”

Bob Plumb, a village trustee, brought up the difference between a charter service and a regularly scheduled service to Sag Harbor, and whether there was an issue bringing seaplane customers to Long Wharf as a commercial use.

“It’s a commercial launch,” said Mr. Deeg. Over text, Mr. Deeg added that seaplane passengers were a “small percentage” of his transports to the docks.

Mayor James Larocca said the essential question is where the planes would land if the current arrangement changed. He said Mr. Deeg’s service was mostly collecting people who arrive by boat and bringing them to the transient docks of Long Wharf. He worried that if the floating dock disappeared, “we would find these guys working their way back closer in, where they want to be.”

“The operation that Ken Deeg runs for us is a service to the boating community especially, and one that has operated without incident for 15 years.”

“My concern is what we’re looking at into the future,” said Mr. Corish. “We should take control of this.”

He said you can go from the East River to Sag Harbor with no restriction right now and with no laws controlling the number of seaplanes that can taxi through Sag Harbor waters. He urged the village to get technical advice, because, he said, no one in the room could speak to the matter in a way that was informative and scientific.

Over the phone Mr. Corish said he was content to begin the discussion about at least prohibiting taxiing in the village waters. He is hoping to build consensus on the board. He noted that no village resident spoke out in favor of the seaplanes, and that it was a service that was adversely affecting many to benefit only a few.