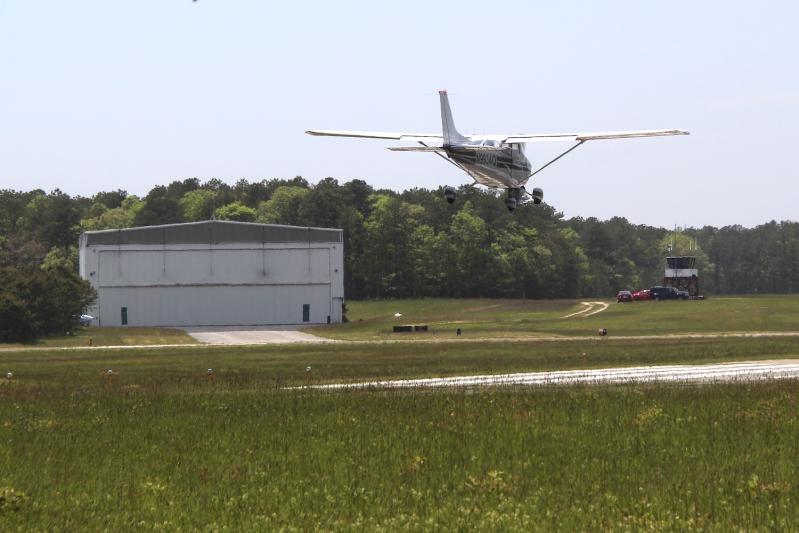 With a temporary restraining order preventing East Hampton Town from closing and reopening the airport last week to turn it from a public facility to a private one, it has been business as usual there this week.
Durell Godfrey
By Christopher Walsh

"We don't really know," a consultant to East Hampton Town said when asked about the future status of the town's airport.

Temporary restraining orders granted by New York State Supreme Court Justice Paul Baisley on May 16 that prevented the town from deactivating the airport the following day and reopening it as a private facility 33 hours later remained in place as of Wednesday. The town is a defendant in three lawsuits filed to prevent the airport's temporary closure. Justice Baisley's order directed representatives of the town to appear in State Supreme Court in Riverhead Thursday morning. "We don't know for sure if that's going to happen," the consultant, who asked not to be named in print, said. "It's hour to hour, day to day."

In fact, parties did not appear in court Thursday morning.

After a months-long effort to address an explosion in quality-of-life complaints regarding air traffic to and from the airport, the plaintiffs -- Blade Air Mobility, East End Hangars, and the Coalition to Keep East Hampton Airport Open, as well as several individuals -- prevailed, at least temporarily, in their effort to thwart the planed deactivation.

The private East Hampton Town Airport, to be known by the location identifier JPX, was to have new curfews and restrictions. Aircraft operators would be limited to one takeoff and one landing per day and only between 8 a.m. to 8 p.m. Monday through Thursday and 9 a.m. to 7 p.m. Friday through Sunday and on federal holidays. There would be restrictions based on the size and noise of aircraft as well. The impact of these were to lead to a permanent, prior-permission-required rule under which the airport would operate.

On Tuesday, Elliott Meisel, a pilot and the president of Hampton Hangars Inc., a plaintiff in the East End Hangars lawsuit, said that his supporters who own hangars and fly single-engine aircraft "would not be unhappy" with a prior-permission-required rule, "subject to there being some modification of restrictions." Mr. Meisel, who lives in Sagaponack and learned to fly at East Hampton Airport, pointed to what he called excessive landing fees for local pilots, the pilot training that a single takeoff and landing per day restriction would disallow, and the curfew. "If I'm out flying and delayed getting home, I don't want to be prevented from getting back home," he said.

He acknowledged that helicopters are a big part of the problem, both in terms of noise and what he called operators' obstinacy over cooperating with the town and other plaintiffs. "I'm not contending that helicopter noise has not increased and is not extremely irritating," he said. "We acknowledge that. But virtually all local aviators in East Hampton are fixed-wing aircraft owners and almost all are piston aircraft."

It is unfortunate, he said, that "as a plaintiff I'm forced to be seeking an injunction against something I may well be satisfied with because I don't have assurance that I'm going to get it, and if I get it, that I can keep it."

Also on Tuesday, the East Hampton Community Alliance, which advocates keeping the airport open, said in a statement that it "joins the overwhelming majority of East Hampton residents who want to maintain an airport with reasonable restrictions. Whether it is called HTO or JPX, reasonable people need to come together for the sake of safety and our economic future."

Mashashimuet Park's History and Future
A Conference for Young People to Create Solutions
Get Outside, Get Moving
END_OF_DOCUMENT_TOKEN_TO_BE_REPLACED