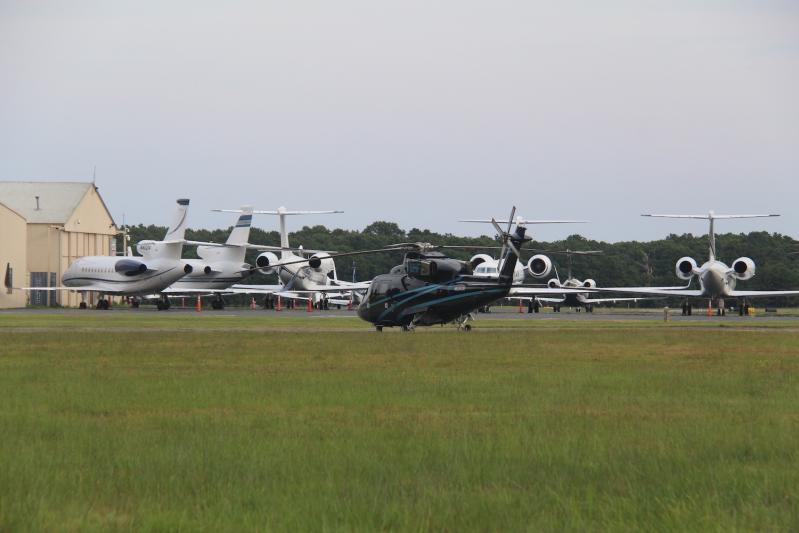 A New York State Supreme Court Justice issued a temporary restraining order on Monday blocking East Hampton Town from temporarily closing its airport on Tuesday at 11:59 p.m. as it had planned.

Justice Paul Baisley's decision, following oral arguments in three parallel lawsuits challenging the plan, prevented the town from moving ahead with a 33-hour closure of the airport, during which it was to transition from being the public East Hampton Airport to the "private" East Hampton Town Airport, with new restrictions on aircraft takeoffs and landings in place.

That plan is now on hold at least until next Thursday, when Justice Baisley has scheduled a hearing ordering the town to show cause as to why the plaintiffs in the three lawsuits -- Blade Air Mobility, East End Hangars, and the Coalition to Keep East Hampton Airport Open, as well as several individuals who live near an airport that could see increased traffic because of diversion from East Hampton Airport -- should not be granted a preliminary injunction that would prevent "the town from deactivating or closing" the airport on Tuesday or any date thereafter.

Supervisor Peter Van Scoyoc said on Tuesday that the town is "fully complying" with the judge's order and is coordinating with the Federal Aviation Administration. The town will consider all options, he said.

Under the town's scuttled plan, the airport would have reopened today at 9 a.m. under what the F.A.A. calls a prior-permission-required framework. Restrictions would have limited aircraft operators to one takeoff and one landing per day. Other restrictions based on the size and noise of aircraft would have been imposed, and aircraft operations would have been limited to 8 a.m. to 8 p.m. Monday through Thursday and 9 a.m. to 7 p.m. Friday through Sunday and on federal holidays.

The restrictions and curfews were aimed at alleviating residents' complaints, which have soared in recent years in tandem with the number of flights, particularly helicopter travel to and from New York City. Consultants to the town board have concluded that the curfews and restrictions outlined would impact around 40 percent of aircraft operations while addressing upward of 70 percent of complaints about them.

Attorneys for the three plaintiffs argued before Justice Baisley on Monday, as did the town's outside counsel for the airport, William O'Connor and Christopher McDonald. The former group carried out a broad attack on the town, complaining that its planned action prior to a full environmental review under the State Environmental Quality Review Act, or SEQRA, was illegal. They continually chided their adversaries, characterizing their arguments with words like "gibberish," "brazen," "scheming," "audacity," "horror," and "havoc."

The town claims it will review the environmental impacts of restrictions during the summer, once they have been implemented, said Steven Russo, representing the Coalition to Keep East Hampton Airport Open. That, he said, is "no different than a shopping center owner saying 'Let me build it, and then I'll know the traffic impacts.' " In fact, he said, the town has admitted that impacts will include diversion of flights to other area airports, including "places my clients live: Montauk, Westhampton, Southampton," and Sag Harbor, where seaplanes may land beyond local jurisdiction. "These planes aren't going to not come to the East End," he said. "They're going to divert."

"SEQRA isn't supposed to be a check-the-box, after-the-fact exercise," Mr. Russo said. Rather, "it's about injecting environmental impacts into the decision process. . . . They can't do it after the fact," he said, yet "that is exactly what the town is trying to do."

The town "put the cart before the horse," said Randy Mastro, an attorney representing Blade. "You cannot ride off until you have done the hard look before you make any change." Absent a T.R.O., the town would impose "significant adverse impacts and irreparable harm that will be felt by the end of this week" on "everyone in the region," he said.

Mr. O'Connor, representing the town, noted that "certain interests" are "very unhappy with the fact that we finally find ourselves in a position to implement reasonable restrictions. This summer will be the first time in decades we've been able to obtain that authority. That authority is very much countenanced by the F.A.A." The plaintiffs, he said, are in a minority, a "well-funded group that would prefer ever-increasing impacts to continue to grow."

It is ironic, he told Justice Baisley, that his clients are worried about adverse impact to their quality of life, the very reason the town is attempting to impose restrictions on aircraft operations at East Hampton Airport. In fact, he said, the town's "serious approach" is commendable. The point of its plan to study impacts when restrictions are implemented "is so we can understand exactly what the impacts may be." The planned restrictions were devised to reduce complaints to the greatest extent possible while causing the least disruption to operations. "This problem" of increasing air traffic to and from East Hampton Airport "keeps growing and growing and growing," he said.

With the expiration of federal grant assurances in September 2021, the town was free to retake control of the airport. The town board, with input from consultants and residents, landed on a middle path between the status quo and closure of the airport with the set of restrictions it planned to impose. "This board rolled up its sleeves and studied the problem," Mr. O'Connor told Justice Baisley on Monday. "Yes, they have been frustrated at times. Yes, they have been met with court challenges, but one thing they haven't done is give up. They are trying to find a compromise. And in any good compromise, there will be people very unhappy."

Separately, the National Business Aviation Association filed motions in United States District Court on Saturday, also seeking a temporary order to prevent the airport's planned closure. A hearing on Monday afternoon was interrupted when one of the attorneys told Justice Joanna Seybert about Justice Baisley's decision in that case. It resumed on Tuesday morning.

By imposing restrictions at the airport, according to its complaint, the town "will irreparably harm N.B.A.A. by threatening the viability of its members' businesses, potentially forcing them to reduce their aircraft fleets and layoff [sic] pilots and other employees." The town's "scheme," it continues, "is in direct violation of federal law," alluding to the 2016 decision striking down curfews and limits on aircraft operations the town put in place in 2015. "This new attempt is too clever by half," the complaint states, and the town's effort "has no basis in law."

Mr. Van Scoyoc said last week that the town reserves the right to close the airport permanently, should it be prevented from implementing imposing restrictions on airport use. On Monday, Mr. O'Connor implied to Justice Baisley that issuance of a restraining order might hasten that very outcome. If aircraft operations, and complaints about them, continue to increase, "this airport will close," he said. "There is nothing under the law, federal or state, that requires us to maintain this airport or keep it open."
--
Note: This article has been updated since it originally appeared online.