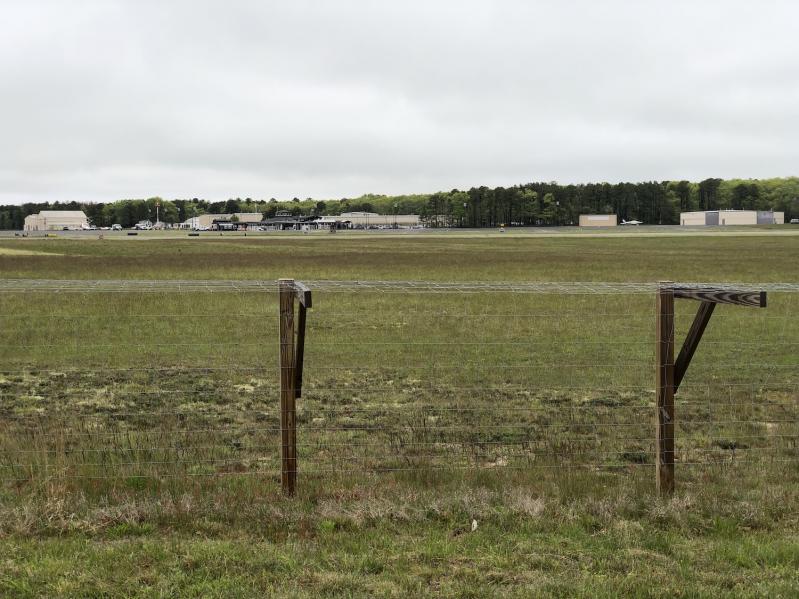 Thursday was to be the day the airport reopened as the private East Hampton Town Airport after a 33-hour closure.
Carissa Katz
By Christopher Walsh

After a months-long effort to craft a plan to address an explosion in quality-of-life complaints regarding air traffic to and from East Hampton Airport, the airport's planned deactivation on Tuesday at 11:59 p.m. did not take place, the plaintiffs in three lawsuits having prevailed on a judge to grant temporary restraining orders on Monday.

A private airport at the same site, with curfews and restrictions aimed at addressing upward of 70 percent of complaints in place, was to reopen on Thursday morning.

While the airport operates as is has previously, at least until a May 26 hearing, the temporary restraining orders have brought turmoil on the ground and warnings of more in the skies. On Tuesday, an F.A.A. official voiced “significant concern” that the court and all parties “have introduced a major safety issue into this complex airspace system.” The following day, an attorney for the town predicted that “someone is going to get hurt,” blasting the plaintiffs who he said have “treated this litigation as a game” from the start.

William O'Connor of the Cooley law firm, an outside counsel that advises the town board on airport matters, wrote to David Fish, the F.A.A.'s Eastern Region, Airports Division director on Monday, informing him of the three court-ordered T.R.O.s. “Accordingly, the town requests to postpone the deactivation of HTO until further notice,” he wrote.” HTO is the airport's previous location identifier; the new airport designation is JPX.

The town, Mr. O'Connor wrote, is also taking steps to cancel the Notice to Air Missions about the closure that was set to occur on Tuesday. The F.A.A. describes a Notice to Air Mission as a notice containing information essential to personnel concerned with flight operations but not known far enough in advance to be publicized by other means.

But Mr. O'Connor's request is more complicated than he framed it, Marie Kennington-Gardiner, regional administrator for the F.A.A.'s Eastern Region, wrote in reply to Andrew Barr of Cooley on Tuesday. The location identifier HTO “will cease to exist in our system at 11:59 p.m. on May 18, 2022” and be replaced with JPX,” she wrote. “We cannot simply undo this.” Because the HTO identifier no longer exists, “pilots cannot use HTO as an origin or destination on a flight plan or file a flight plan to HTO. This presents aviation safety risks in the congested New York airspace.”

Airspace designated to HTO would not be on the new aeronautical charts scheduled for publication on Thursday, Ms. Kennington-Gardiner wrote. The town board had previously postponed a planned four-day closure starting on Feb. 28 in order to coincide activation of the private airport with the F.A.A.'s charting cycle. The F.A.A. issues new navigational charts on 28 and 56-day schedules, and Thursday was the first applicable charting cycle date to occur after its internal processes for activation of the East Hampton's "new" airport were completed.

“The current Instrument Approach Procedures (I.A.P.) will decommission on May 18,” Ms. Kennington-Gardiner wrote on Tuesday, and the deadline allowing a change to that plan was missed. The procedures were rebuilt as “special instrument flight procedures” using a third-party provider, Flight Tech Engineering, she noted, and were validated and scheduled to be published on Thursday.

Moreover, she wrote, New York Terminal Radar Approach Control, in Westbury, which is also known as N90, “has been trained and the Letter of Agreement between the town and the F.A.A. has been developed and signed for the Airport (JPX).” Any change would require retraining the controllers at N90, she said. “Even if the current I.A.P. could be revived, controllers must be re-trained in the former procedures. This training in the new procedures and subsequent retraining in the old procedures is likely to cause confusion for the controllers, which will create an unacceptable safety risk.”

Because the F.A.A. “cannot safely forestall several aspects of the deactivation process” including the location identifier and instrument approaches, “it is more prudent to continue operating the airport under the JPX identifier after May 19,” Ms. Kennington-Gardiner wrote. This allows the filing of flight plans to the airport, and coded departure routes reflecting the JPX identifier are applicable for use as of Thursday.

“As a result of the actions already taken and processes in place, the F.A.A. has significant concern that the court and the parties have introduced a major safety issue into this complex airspace system,” she concluded. “The F.A.A. is working on the processes to enable the town to operate JPX and implement the substance of the court's order while maintaining safety in the national airspace. We trust that you will communicate these concerns to the court and keep them in mind going forward.”

In an affirmation supporting an emergency motion to vacate or modify the temporary restraining orders, Nicholas Rigano, an outside counsel to the town, placed the blame for the “major safety issue” squarely on the plaintiffs -- Blade Air Mobility, East End Hangars, and the Coalition to Keep East Hampton Airport Open, as well as several individuals. The F.A.A.’s letter, he wrote to Justice Baisley, “makes absolutely clear that the T.R.O.s as written pose an immediate and potentially catastrophic danger.” From the start, he said, the plaintiffs “treated this litigation as a game to prevent the town from regulating the airport in any manner that does not align with their preferences. But this is not a game. Someone is going to get hurt.”

Supervisor Peter Van Scoyoc said on Tuesday that the town is fully complying with the temporary restraining orders granted by Justice Paul Baisley of New York State Supreme Court. A press release issued from Town Hall on Wednesday said that the town “continues to consider all available legal options, remedies, and alternatives” regarding the airport.