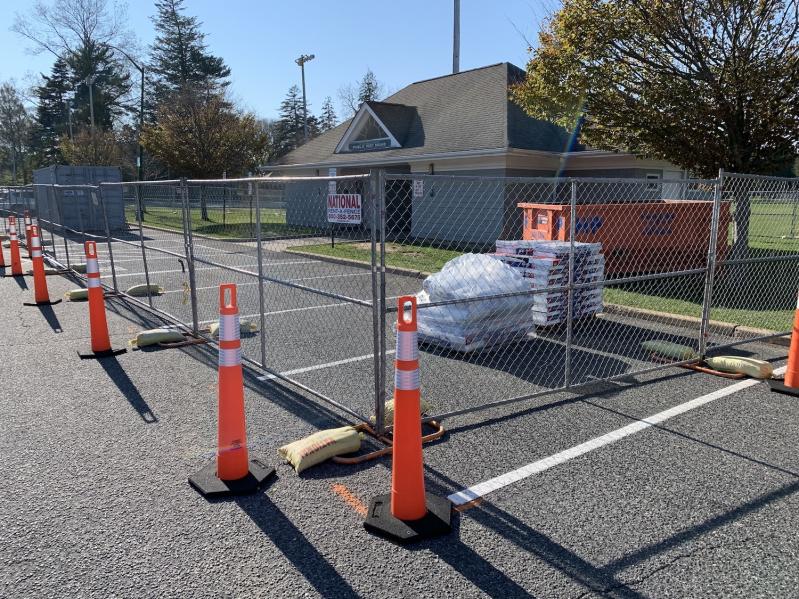 Work on the bathrooms was supposed to start in the spring, but was delayed due to material shortages.
By Christopher Gangemi

Observant residents may have noticed that fencing now circles the Herrick Park bathrooms at the edge of the Reutershan parking lot in East Hampton, and that approximately 10 parking spots have been temporarily sacrificed. The long-awaited renovation of the oft-vandalized bathrooms, a fixture of the police blotter, has begun.

According to the village, the bathroom serves over 1,000 people a day during the summer months.

Plans for the bathrooms include replacing the exterior shingles and roof, and having windows made of glass capable of withstanding the force of a thrown ball.

Recessed lighting, less susceptible to breakage, will be installed.

With a nod toward the Covid era, the sinks, soap dispensers, and toilets will all be touchless.

The renovation is beginning later than originally anticipated. At the January 2022 meeting, work was scheduled to begin in March, and be over by May. However, in a Thanksgiving letter to residents, Mayor Jerry Larsen wrote, “Due to the material shortages, our contractor spent most of the summer and fall receiving all of the materials for the renovation project so we could hit the ground running once demolition began.”

At the village board meeting last week, Mayor Larsen said it would be “approximately 60 days” until the bathrooms are completed.

“It’ll be a nice change for those bathrooms which really needed some help,” he said.

Botta Sferrazza Architects of East Hampton billed the village $30,000 for the design. The overall renovation costs will run just under $600,000, according to Marcos Baladron, the village administrator.

In other park news, Mr. Baladron said “The Plantinum Bull” will be removed from Herrick Park after the holidays. At the Dec. 16 Village Board meeting, Andrea Grover, executive director of Guild Hall, and Christina Mossaides Strassfield, chief curator, will present the next sculpture installations at the park as an Art in the Park series going forward.

“The board of trustees wanted to start this pilot program, but they didn’t want to be the ones curating the art,” said Mr. Baladron.