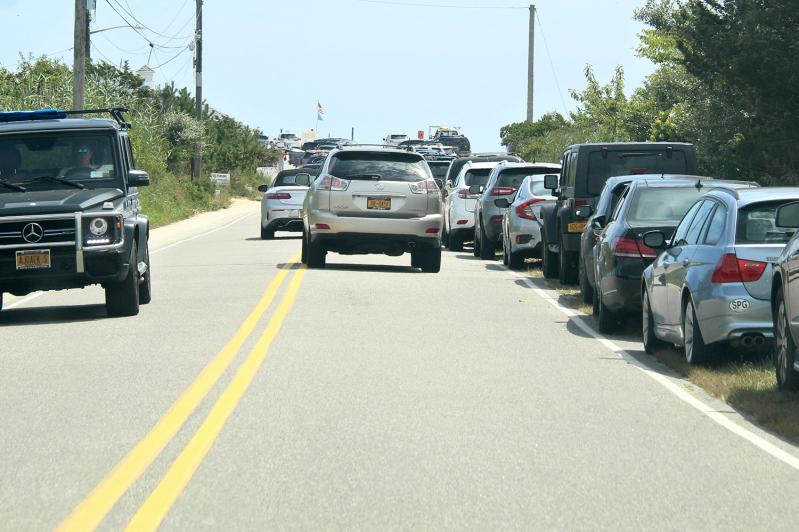 A summer weekend on Indian Wells Highway in Amagansett. Chief Michael Sarlo told the East Hampton Town Board this week that sidewalks there should be modified to increase parking and public safety.
Durell Godfrey
By Christopher Walsh

Wi-Fi connectivity at East Hampton Town’s public beaches and new informational signs using QR codes that beachgoers could scan with their smartphones to be directed to the town’s website were among the recommendations issued by the town’s Beach, Parks, and Recreation Recovery and Advisory Group on Tuesday.

The advisory group was convened in response to the Covid-19 pandemic following Supervisor Peter Van Scoyoc’s March 13, 2020, declaration of a state of emergency to consider the safe use of those places during their open hours. It includes John Rooney of the Parks and Recreation Department, Anthony Littman of the Buildings and Grounds Department, Town Police Chief Michael Sarlo, Ed Michels of the Marine Patrol, John Ryan Jr., the chief lifeguard, Severo Kristofich, the Buildings and Grounds Department crew leader, and Francis Bock, clerk of the town trustees. Councilman David Lys, the town board’s liaison to the group, presented its findings during the board’s work session.

Along with Wi-Fi and QR codes on signs, the advisory group recommended additional use of technology. Last year, some lifeguards began seeking Federal Aviation Administration certification to become qualified operators of the two drones donated to the town for beach safety. Additional research is being done to acquire sonar devices to improve fast-attack search-and-rescue capabilities in missing-swimmer operations.

The group also suggested the addition of a summer beach manager position to coordinate all departments and serve as a liaison to the town board. Police and Marine Patrol officials see the need for a greater presence and enforcement on the sand, especially at dusk and later at night, and long-term changes to the right of way parking south of Main Street in Montauk, possibly to include areas of no parking and time restrictions. Evening and nighttime activities and beach fires were the trustees’ greatest concerns.

Mr. Lys, noting that a swimmer drowned in front of a resort on the ocean beach on Napeague in 2020, said that the advisory group recommended outreach to resorts and hotels at unprotected beaches, suggesting that those businesses that place chairs and umbrellas on the beach must also employ certified lifeguards.

That had been tried in the past, Chief Sarlo said, but the effort was hindered by “a lot of hurdles,” including questions of public rights of way and liability concerns. It is “extremely challenging” to delineate who is responsible for employing a lifeguard, he said.

As has been discussed for several years, the group recommended a new ocean bathing beach and parking, specifically a guarded beach in the Napeague area, and the removal of parking on Montauk Highway to the extent possible. A discussion of added parking along the right of way at the terminus of Dolphin Drive should be renewed, the group said.

The removal of the sidewalk on the west side of Indian Wells Highway in Amagansett and the addition of a crosswalk near its intersection with Bluff Road would increase parking and safety, Mr. Lys said. At present, Chief Sarlo said, beachgoers are parking partially in the lane of travel on the west side, creating congestion, and the east side is sometimes washed over with sand, with some people uncomfortable walking or pushing strollers there. “We have to do something with that west side — clean it up, make it more user-friendly,” the chief said.

The installation last year of beach mats allowing those with disabilities to access beaches was successful at Atlantic Avenue Beach in Amagansett, Mr. Lys said, but the slope at Big Albert’s Landing Beach in that hamlet did not allow mats there. The town should seek additional locations for them, he said.

The advisory group recommended the banning of all smoking and vaping 100 feet from the boundaries of protected bathing areas at guarded beaches during lifeguarded hours.

Emergency travel lanes at the back of beaches, established before the 2020 summer season, should remain in place, Mr. Lys said.

Paid parking at the lots at Kirk Park Beach in Montauk and Atlantic Avenue Beach produced more than $150,000 in nontax revenue last year, Mr. Lys said. The advisory group recommended the continuation of paid parking at those beaches.

Beach parking lots are diminishing in size because of the wind’s moving of sand. The lots should be surveyed and boundary markers installed for future needs, Mr. Lys said.

Because some beachgoers are not complying with the code relating to beach fires — with potentially harmful litter the inevitable result — the advisory group suggested that the board consider the creation of a permit application, the development of procedures for ash removal for town staff, the allowance of a licensee to provide beach fire services including removal, and limits on areas and times for beach fires. The board could also ban beach fires.

Another recommendation for 2022 is a pilot “carry in, carry out” program at a designated beach, at which beachgoers would be required to take their trash with them when they leave.