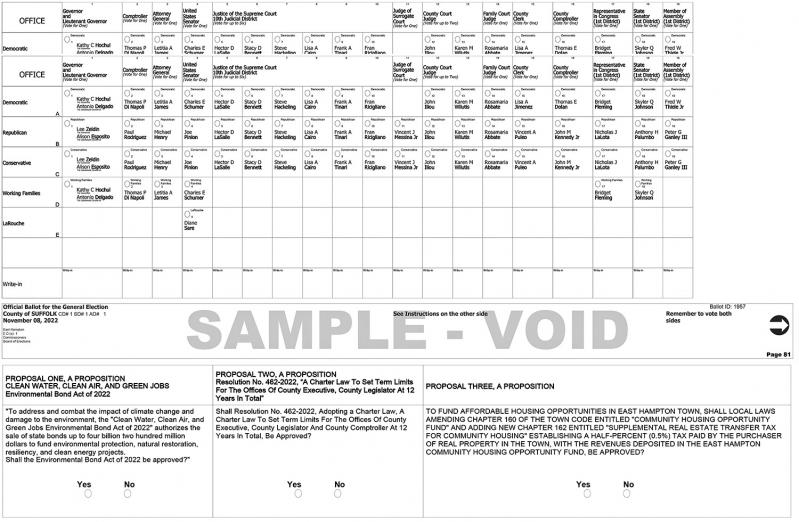 Five days before Election Day, the results of Tuesday’s midterm elections were anyone’s guess, with dueling polls showing Gov. Kathy Hochul comfortably ahead of Representative Lee Zeldin and Mr. Zeldin with a slight lead over the governor. Mainstream media outlets have settled on a late-campaign narrative of Republicans claiming majorities in the United States Senate and House of Representatives, but variables including the future of democracy, crime, inflation, and the Supreme Court’s June decision overturning the right to an abortion have rendered conventional wisdom of little value.

Meanwhile, former President Trump continues to loom over the political discourse, his legal jeopardy mounting as his endorsed candidates, many of whom promulgate his lie about a stolen 2020 election, are poised to dramatically shift the composition and direction of Congress next year and beyond.

“Zeldin Momentum Stalls as Hochul Rallies Support” was the headline of an Emerson College/Pix11/The Hill poll conducted between last Thursday and Monday, after the candidates’ sole debate on Oct. 25. The poll put the governor, a Democrat, ahead of Mr. Zeldin, a Republican who has represented New York’s First Congressional District for four terms, by eight percentage points, 52 percent to 44 percent, a slightly larger lead than other recent polls indicated.

“With undecided voters’ support accounted for, Hochul’s lead extends to nine points,” 54 percent to 45 percent, according to a summary of the poll’s conclusions. “Since the pre-debate Emerson/Pix11/The Hill poll, Hochul has gained two percentage points and Zeldin has stayed at 44 percent support.”

But a Trafalgar Group poll conducted between Friday and Monday put Mr. Zeldin slightly ahead, 48.4 percent to 47.6 percent. That organization’s conclusions, however, often diverge sharply from those of other pollsters, with the Republican candidate performing significantly better.

Mr. Zeldin has made crime a centerpiece of his campaign. But, the governor predicted on MSNBC on Tuesday, “as the polls get down to the end here, I believe you’ll start to see a separation between us, even more so as people realize that rhetoric is not going to get them safer, but the results and a real record that we’re focusing on will. . . . When Democrats get out and vote, we win. And that’s what’s going to happen one week from today.”

According to the website fivethirtyeight.com, the governor was “clearly favored” to win the election. In its simulations, Ms. Hochul wins 97 of 100 times. As of Tuesday, the site predicted a popular vote of 55.9 percent for the governor to 44.1 percent for Mr. Zeldin.

In the First Congressional District, Suffolk County Legislator Bridget Fleming, the Democratic candidate, and Nick LaLota, who is chief of staff to the Republican presiding officer of the Suffolk Legislature, are in a race to succeed Mr. Zeldin. As of Tuesday, fivethirtyeight.com’s simulation had Mr. LaLota, the Republican candidate, winning in 78 of 100 simulations, predicting 52.8 percent of the vote for the Republican against 47.2 percent for the Democrat. The district, which was represented for six terms by the Democrat Tim Bishop before Mr. Zeldin ousted him in 2014, “leans Republican,” according to the website politico.com.

The First District’s boundaries were redrawn this year. How that will affect the outcome of the race remains to be seen.

Fivethirtyeight.com also puts Senator Chuck Schumer comfortably ahead of his Republican challenger, Joe Pinion, predicting a greater than 99-percent chance that Mr. Schumer will be re-elected and a result of 58.2 percent for the incumbent versus 40.1 percent for the challenger.

Assemblyman Fred W. Thiele Jr. is defending his seat from Peter Ganley, a newcomer. In the State Senate, the first-term incumbent Anthony Palumbo, a former assemblyman, is seeking re-election against another young challenger, Skyler Johnson.

“I feel very positive,” Manny Vilar, chairman of the East Hampton Town Republican Committee, said on Tuesday. “I think the people of the State of New York, and on the East End, are fed up. Inflation is literally destroying anybody on a fixed income, literally wiping their savings out.”

He predicted a Republican sweep of races on the East Hampton Town ballot, from Mr. Zeldin to Mr. LaLota, Mr. Palumbo, and Mr. Ganley. “At the end of the day, it comes down to what is important to voters,” he said. Of Democratic candidates, he said that “hitching their wagon to abortion and ‘I hate Donald Trump’ was not a winning strategy.”

Anna Skrenta, chairwoman of the East Hampton Town Democratic Committee, said on Tuesday that, while the governor’s lead is “well outside the margin of error,” the race has tightened. Mr. Zeldin, she said, “has been effective at exploiting New Yorkers’ concerns but has offered no substantive plans to address the problem of rising crime rates or the actual underlying causes.” East Hampton Democrats “are genuinely alarmed at the prospect of Zeldin becoming governor of our state, but thankfully it is motivating them to work harder to make sure he doesn’t get elected.”

Mr. Johnson, she said, “represents the future of the Democratic Party.” Mr. Palumbo “has a slight advantage as an incumbent, but the newly drawn district lines work in Skyler’s favor.”

Mr. Vilar predicted that the State Assembly race will be “too close to call” on election night but that Mr. Ganley will prevail. “I love Fred dearly,” he said of Mr. Thiele, “but unfortunately, Fred has caucused and taken positions that are not consistent with what I think are the values of the East End. Peter, I think, is a young version of Fred Thiele.”

Ms. Skrenta said that Mr. Ganley is inexperienced and “has no record as a public servant, so his platform is entirely aspirational and he is on the wrong side of the issues.” Mr. Thiele “has been an incredibly effective lawmaker for the East End,” she said. “I would be shocked if he is unseated by newcomer Ganley.”