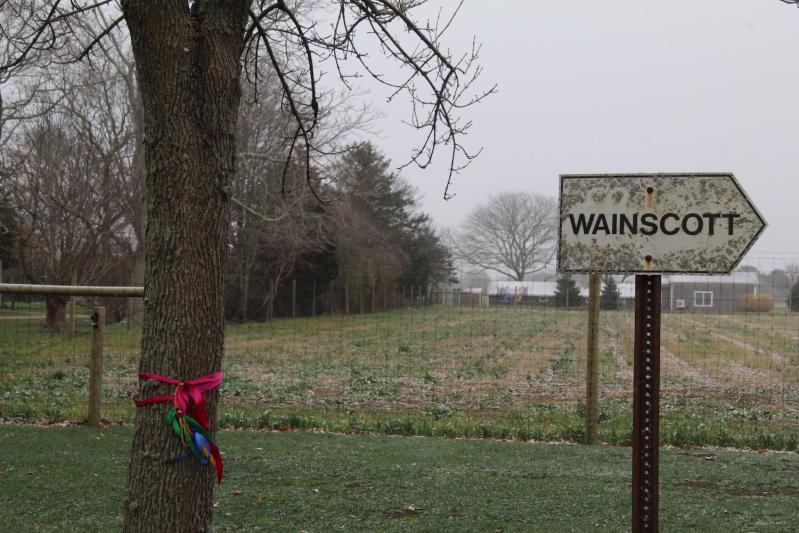 A ribbon tied on a beloved tree in Wainscott. Developers of the South Fork Wind farm have said that removal of any trees along the wind farm's underground cable route will subject to review by New York State Department of Public Service staff, the State Department of Environmental Conservation, and East Hampton Town.
Durell Godfrey
By Christopher Walsh

With onshore construction for the South Fork Wind farm set to begin this month, survey and construction preparation work is to commence on Thursday.

According to an announcement on Friday by Orsted U.S. Offshore Wind and Eversource Energy, the developers of the project, the initial work will be within the footprint of the transmission cable’s onshore route. The cable is to make landfall at the ocean beach at the end of Beach Lane in Wainscott and travel underground to the Long Island Power Authority substation in East Hampton.

The work is to collect samples of previously installed groundwater monitoring wells and to prepare portions of the Long Island Rail Road right of way for construction. The well surveys are to be done by a small crew using hand-held tools, with the work expected to be completed within a week, weather permitting. Additional surveying will travel along access roads and work areas within the L.I.R.R. rights of way and on portions of town-owned rights of way along roads and where they intersect with the L.I.R.R. corridor.

Some trees are to be removed at the substation, off Cove Hollow Road. The developers have said that no trees along Beach Lane or other town roads will be removed, with the exception of some near L.I.R.R. crossings. Trees will be marked for review and acceptance by New York State Department of Public Service staff, the State Department of Environmental Conservation, and East Hampton Town before any removal can occur.

The environmental surveys on the rights of way will take up to four weeks to be completed. The developers said that no road closures will be required and that any traffic impacts associated with survey work are expected to be minimal. Appropriate traffic control provisions will be employed when necessary, however. Survey crews performing the work will carry proper identification, the developers said.

At the Wainscott Citizens Advisory Committee meeting on Saturday, Councilwoman Cate Rogers, who was elected to the board in November, spoke of a virtual preconstruction meeting in which she and Councilman David Lys had taken part along with officials of the town’s Police, Highway, Public Works, and Planning Departments. An overview of construction protocols and scheduling was detailed, she said.

She will oversee compliance, she told the committee, and ensure that all conditions of the permits, easements, and host community agreement will be adhered to.

Stantec, a third-party compliance management company, has been hired to oversee and ensure that regulations are followed. The company is to have two officials on hand during the 7 a.m. to 7 p.m. construction times for the duration of the project.

There will be weekly meetings for reporting and updating as to the construction project’s progress. The developers must inform the town within 24 hours of any accident, Ms. Rogers said, and cannot deviate from the plan without going through another permit process, which would include public comment.

“This lays out a strict road map for the developer, where there’s no making things up as you go,” Ms. Rogers said. “Everything is laid out, from reporting to all aspects of how projects will be handled.”
—
Note: This story has been updated from the version that originally appeared online.