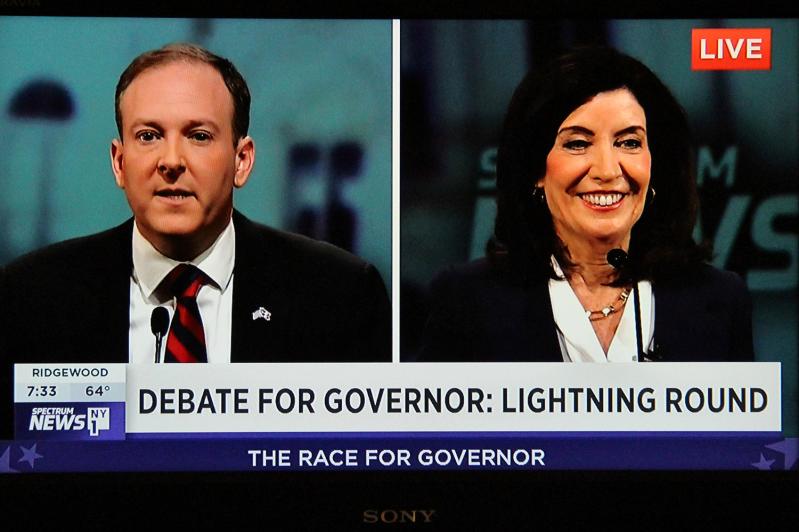 Gov. Kathy Hochul and Representative Lee Zeldin came out swinging on  Tuesday in what is likely to be their only debate before the Nov. 8 election, and the intensity had hardly flagged when it ended an hour later.

The candidates disagreed on virtually everything, from crime to abortion to gun policy. The governor repeatedly  tied the congressman to former President Trump and the effort to overturn  his 2020 election defeat, while Mr. Zeldin, who would not utter the former president’s name, called Ms. Hochul pro-criminal and corrupt.

The race has tightened considerably, according to polls, with a recent poll  showing the governor’s lead at six per- centage points, 47 percent to 41 percent.  Mr. Zeldin hammered the governor on crime, noting that one of her first  moves as governor last year was to ap- point Brian Benjamin as lieutenant  governor. He called Mr. Benjamin, who was indicted on federal bribery charges and resigned in April, a “champion of defund the police” and “architect of cashless bail,” New York’s bail reform law passed in 2019 that prohibits cash  bail for most misdemeanors and nonviolent felonies.

“We need to repeal cashless bail,” Mr. Zeldin said. “We need to make streets safe again. I’m running to take back our streets and to support, un- apologetically, our men and women in  law enforcement.”

The governor responded that she has  modified bail reforms, to positive effect, and said that “there is no crime- fighting plan if it doesn’t include illegal  guns, and you refuse to talk about how we can do so much more. You didn’t even show up for votes in Washington when a bipartisan group of enlightened legislators voted for an assault weapons ban.” She referred to Monday’s school shooting in St. Louis, which she said happened “because people will not support what I was able to get done here in New York, and that is a ban on assault weapons for teenagers.”

“You can’t even do that,” she told the Republican. She reinforced the theme of inaction later with a reference to the  First District, which Mr. Zeldin represents. “He didn’t show up to vote for  sensible gun safety legislation,” she said. “He walked off his job years ago to run  for this one, and I feel for his constituents who’ve been not represented  at all over the last year and a half.”

Ms. Hochul said Mr. Zeldin could not be trusted to maintain the state’s 2019 Reproductive Health Act, which strengthened abortion rights. “There’s very few people in Congress who have a more pro-life record, someone who said he’d bring on a pro-life health commissioner. You know how much power that person has over decisions on regulations? They could use their power to shut down clinics. That is a frightening spectacle. Women need to  know that that’s on the ballot this November as well.”

Asked what he would do if a Republican-dominated State Legislature  changed the law, Mr. Zeldin did not answer directly, instead stating that such  a scenario would not happen. After the Supreme Court’s June ruling that the Constitution does not confer the right to abortion, “the law in New York was  exactly the same as it was the day be- fore,” he said. “And I’m not going to  change that.”

A moderator asked Mr. Zeldin why he has not committed to maintain funding for Planned Parenthood, which many women consider a trusted service for health care. Mr. Zeldin again dodged the question. “What’s important is the will  of the people,” he said. “We have to lis- ten to what New Yorkers want.”

“Lee, you can’t run from your record,” the governor objected. “I don’t know how you think that people won’t know your past record and the fact that your name was on the amicus brief in support of the Supreme Court decision overturning Roe v. Wade. The day after it happened, you applauded it and said ‘what a great victory for life.’ That wasn’t that long ago, Lee. People are paying attention.”

In a “cross-examination” round in which the candidates fired questions at  each other, Mr. Zeldin accused the governor of pay-to-play corruption and of  unilaterally suspending the state’s competitive bidding laws and awarding no- bid contracts to her donors. He cited  Digital Gadgets, a company that pro- vided Covid-19 test kits and whose  founder is a significant donor to the governor, as an example.

“I don’t accept the premise,” Ms. Hochul answered. “There is no pay-to- play corruption. Just over a year ago, we  had a crisis where my responsibility was to protect children, to get them back in schools when Omicron hit. . . . I told my team, you go out and find every test kit you can find. . . .I did everything I could in my power to get the test kits. I’m glad I did, because we got the children back in school in New York, and they didn’t go back in many other places. There has never been a quid pro quo, a policy change, or decision made because of a contribution.”

When it was the governor’s turn, she asked her opponent if he thought Mr. Trump was “a great president.”

Again,  Mr. Zeldin did not answer directly, in- stead reciting a litany of what he considered the former president’s success- es, from the MS-13 gang to the electron- ion collider coming to Brookhaven National Laboratory, and moving the Unit- ed States embassy in Israel from Tel  Aviv to Jerusalem.

“I’ll take that as a resounding yes,” Ms. Hochul said, “and the voters of New York do not agree with you.”

Another Supreme Court ruling this year struck down New York State’s handgun-licensing law that required residents to show a special need to carry  a handgun in public. The state then en- acted new laws strengthening back- ground checks and firearm training for  those seeking concealed-carry permits,  and prohibited permit holders from taking firearms into locations deemed sensitive. (A federal judge temporarily halt- ed a portion of the new laws last week.)

Mr. Zeldin said that the state’s concealed-carry law, in place since 1913,  was unconstitutional. “Instead of going after illegal firearms [in crimes]  committed by criminals,” he said, Ms. Hochul “goes after the law-abiding  New Yorkers.” The new laws, he predicted, will be overturned “because  it’s unconstitutional.”

Addressing the audience, the governor blamed the decision on “the Donald Trump appointees to the United States Supreme Court, the same ones that overturned your right to have an abortion. They took away my right as governor to protect the citizens on our subways, synagogues, or sitting in a classroom. . . . They’ve opened up the floodgates.”

After the high court struck down the handgun law, she said, she “called the Legislature back immediately, said we have to address this” with the new laws.

All legislation is subject to court challenges, she said, “even the SAFE Act,”  the state’s Secure Ammunition and Firearms Enforcement Act of 2013, which among other provisions requires mental health professionals to report to  authorities if they conclude that an in- dividual is likely to harm themself or  others. Mr. Zeldin, she noted, calls for the SAFE Act’s repeal. “Keeping guns out of the hands of mentally ill people is something you would overturn,” she said. “People need to know where you stand on protecting our people.” Election Day is Nov. 8. Early voting starts on Saturday and continues through Nov. 6.