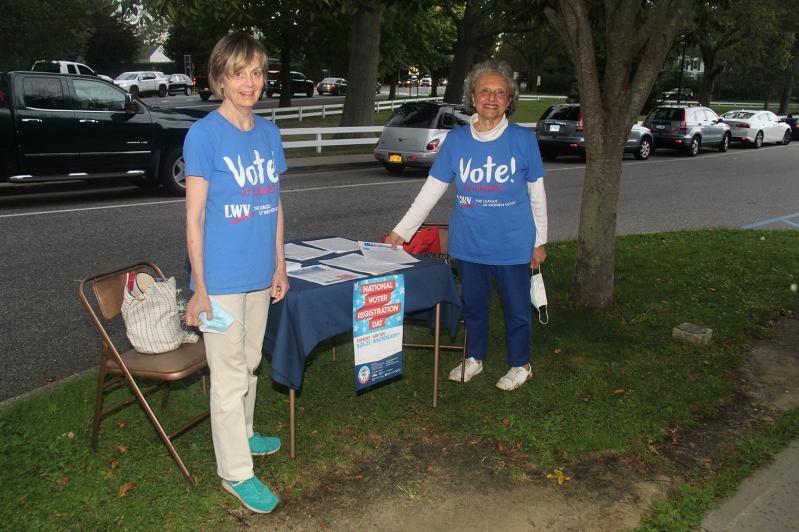 Jane Hastay and Arlene Hinkemeyer of the League of Women Voters of the Hamptons, Shelter Island, and the North Fork helped people register to vote outside the East Hampton Post Office on Tuesday. The League will host a series of debates in advance of local elections.
Durell Godfrey
By Christopher Walsh

A debate between the candidates for East Hampton Town supervisor and, separately, those for town board, will happen on Oct. 21 at 7 p.m. Supervisor Peter Van Scoyoc, running on the Democratic and Working Families tickets, and Councilman Jeff Bragman, running on the Independence Party line, will take part. The league's Estelle Gellman will moderate.

Mr. Karpinski and Mr. Aman have declined to participate in debates by video conference, Manny Vilar, chairman of the East Hampton Town Republican Committee, told The Star last Thursday. Ken Walles, the Republican and Conservative Party candidate for supervisor, previously said that he would not participate if the debate is held remotely and not in person. It will be broadcast live on LTV's Channel 20 and on its YouTube channel.

On Monday at 7 p.m., the league will host a debate among the four candidates for two seats on the Southampton Town Board. They are Councilman Tommy John Schiavoni and Robin Long on the Democratic side, and Cynthia McNamara and Ann Thomas, Republicans. Susan Wilson, the league's president, will moderate, and it will be broadcast live on Southampton's SEA-TV and on YouTube.

There will be no debate for Southampton Town supervisor, as Jay Schneiderman is running unopposed.

On Oct. 18, candidates to represent the Suffolk County Legislature's Second District will debate at 7 p.m. Legislator Bridget Fleming, a Democrat, and Robert Carpenter, a Republican, will participate, as Cathy Peacock of the league moderates. It will also be broadcast live on SEA-TV and on YouTube.

At all debates, the candidates will make timed opening and closing statements and answer questions submitted in advance to Barbara McClancy, the league's voter services committee chairwoman, at [email protected].