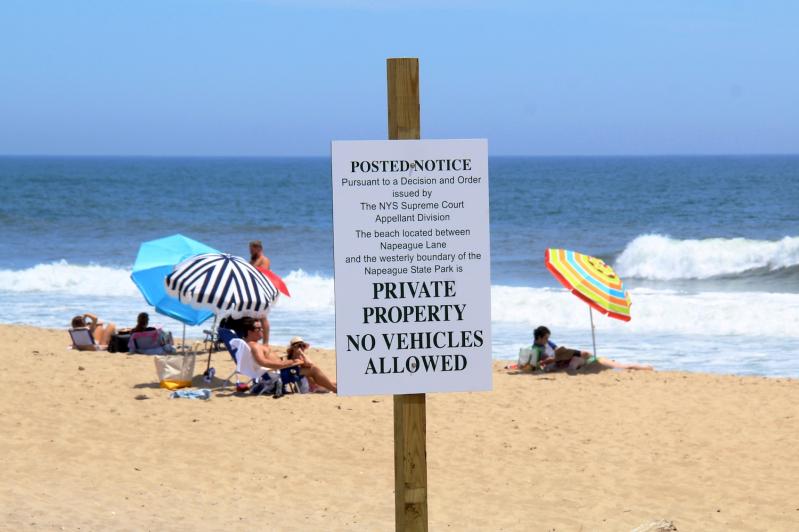 A signed placed on the beach at Napeague in June referenced a February ruling by a panel of State Appellate Division judges that the landward property owners there own the beach to the mean high-water mark.
Durell Godfrey
By Christopher Walsh

The yearslong court battle pitting East Hampton Town and the town trustees against property owners along a 4,000-foot stretch of ocean beach on Napeague popularly known as Truck Beach ended on Tuesday, as the homeowners' associations prevailed in their quest to claim ownership of the beach adjacent to their properties.

The New York State Court of Appeals, the highest court in the state, rejected appeals by the town and the trustees to reconsider a February ruling by a panel of State Appellate Division judges that the landward property owners own the beach where residents of the town drove and parked vehicles to fish and recreate for generations.

That ruling reversed a 2016 State Supreme Court decision in the town's favor, in which Justice Ralph Gazzillo, citing an 1882 deed in which the trustees conveyed some 1,000 acres on Napeague to Arthur Benson, ruled that the deed "clearly reserved some rights 'to the inhabitants of East Hampton' and, arguably, the allowances for some public use."

The Appellate Division judges came to a starkly different conclusion, writing in February that, contrary to the Supreme Court's determination, the homeowners associations "established their title claims by a preponderance of the evidence." A land title expert had testified to the homeowners associations' chains of title to their respective properties at the 2016 trial, they wrote, concluding that the titles extended to the mean high-water mark of the ocean.

The town and trustees had contended that even if the homeowners associations established their respective title claims, the town nevertheless retained the right to allow the public to operate and park vehicles along the entire beach based on a reservation contained in the Benson deed. The clause at issue "reserved to the inhabitants of the Town of East Hampton the right to land fish boats and netts to spread the netts on the adjacent sands and care for the fish and material as has been customary heretofore on the South Shore of the Town lying westerly of these conveyed premises."

In the spring, the Appellate Division reiterated its February affirmation that town residents at large have no inherent right to drive or park vehicles on the beach in question, and town officials enforced the prohibition. An injunction naming as defendants the five members of the town board, the nine town trustees, East Hampton Town Police Chief Michael Sarlo, and Ed Michels, the chief harbormaster, threatened them with civil contempt should they violate the Feb. 3 decision. That came in response to an application by James Catterson, an attorney representing one of the homeowners associations, to hold the town in civil contempt for failing to prohibit vehicular access to the beach.

In a June 27 act of civil disobedience, baymen and their supporters drove a caravan of 39 trucks onto the beach to assert what they believe is their right to use, and drive on, the ocean beach there. The group drove on the 4,000-foot stretch before turning around and leaving the beach.

At the time, Dan Rodgers, an attorney representing baymen, promised that they would return. On Tuesday, he remained resolute. "They're saying it's over, there's nothing you can do," he said of the Court of Appeals. "However, I'm going to stand on the same ground as before. If you review the original decision in February, the court concluded there is an easement for the purpose of fishing and fishing-related activities. The only thing the court decided, in my understanding, is that this easement is not to be so broadly construed as the town wants it to be. So parking and driving are not permitted, but the court also concluded that fishing and fishing-related activities are."

The property is now deemed private, Mr. Rodgers said, but "my clients as fishermen have an absolute property right to go on that beach to conduct their fishing and fishing-related activities. . . . My clients are going to fish on that beach like they have for hundreds of years, and I'll be damned if I'm going to let anybody stop them." Because, he said, "the only way you can engage in fishing and fishing-related activities of the kind my clients do is with motorized vehicles. We know that 100-plus years ago, when the easement was granted to the citizens of East Hampton, there were wheeled carts and wagons. They could not have contemplated motorized vehicles when this was issued. You have to side with the practicality side of this."

Stephen Angel, an attorney representing the plaintiffs, disagreed. Mr. Rodgers "is probably right when it came to haul seining," he said of the method of catching fish that was banned by the State Department of Environmental Conservation in 1990. But "if somebody wants to drive down there with a fishing rod in their truck, I don't think the easement would allow that." The case is closed, he said. "Our clients own the property. That issue has been determined with finality."

Michael Rikon, an attorney representing the defendants, and Supervisor Peter Van Scoyoc both expressed frustration with the Appeals Court on Tuesday. "It's disappointing because there were so many other issues that were undecided" by the Appellate Division, Mr. Rikon said. "They reversed a [2016] decision by the trial court, which dismissed the actions, and instead held that the homeowners provided title to the beach. What they didn't discuss was that the public has been using that beach for decades, much more than was necessary to obtain adverse possession," a legal principle under which someone without title to property can acquire ownership based on continuous occupation.

The Appellate Division, he said, "also didn't discuss the fact that the homeowners took title from a filed plat" -- a map depicting property boundaries -- "which specifically disclaimed ownership of the beach."

The Court of Appeals sharply limits the cases it will hear, Mr. Rikon said, with only 11 percent of applications granted. "You don't have much chance of getting it. Yet I thought this would be granted, because it involved issues that are not only of interest to the Town of East Hampton but to the entire state, and the country."

Mr. Van Scoyoc agreed that the success rate of having an appeal reheard is very low, "although we do believe there were a number of important facts the court did not address in its decision." He, too, referred to filed maps "and a number of other findings of fact that were presented to the court, that the court did not specifically address, that we think are very important. That's disappointing, but the board is still committed to ensuring that we will continue to be able to have those traditional access rights restored, and we're willing to move forward on whatever means are necessary in order to do that."

That may mean eminent domain proceedings, using public benefit as justification, in which the shorefront between the mean high-water mark and the toe of the sand dunes would be condemned and the property owners paid fair market value, as was planned before the 2016 decision affirming the public's right to access the beach. "We obviously are going to continue to look at all possible avenues," Mr. Van Scoyoc said.

Condemnation is "extraordinarily risky," Mr. Angel said, "because in this particular case, I don't know whether they'd get beyond the public benefit or public necessity. It's hard to contemplate condemnation so you could have a beach with trucks on it." Further, he said, "value is a very difficult concept. It could be $100 million -- who knows? Is the town willing to roll those dice?"