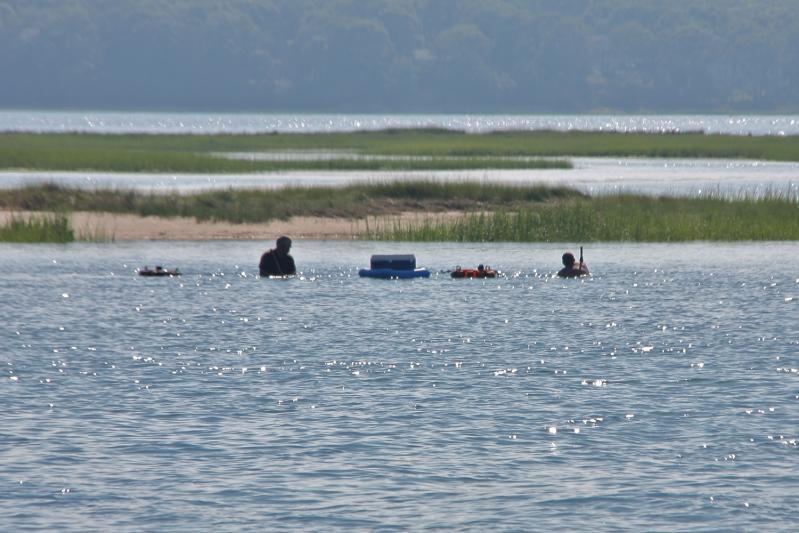 Recreational shellfish harvesters with a valid shellfish license from the town can enter hard-clam contestants harvested from Napeague, Accabonac, and Three Mile Harbors as well as Lake Montauk and Hog Creek.
Durell Godfrey
By Christopher Walsh

The East Hampton Town Trustees' Largest Clam Contest, a popular annual event that showcases the trustees' role in town government and the bounty of the town's waterways, will be held once again this year, starting at noon on Oct. 3.

The event takes place on the grounds of the Lamb Building, at the corner of Bluff Road and Atlantic Avenue in Amagansett, which houses the trustees' office.

Recreational shellfish harvesters with a valid shellfish license from the town can enter hard-clam contestants harvested from Napeague, Accabonac, and Three Mile Harbors as well as Lake Montauk. This year a fifth water body, Hog Creek, has been added. As always, prizes will be awarded in adult and junior categories for each of those water bodies and in each division. One clam per contestant per day can be entered.

New to the contest this year, said Ben Dollinger of the trustees, is a separate contest for commercial fishermen. In this category, one prize will be awarded for the largest clam over all.

Also new this year is a clam pie showcase, Mr. Dollinger said. Members of the public can enter their own, with a note about its history — a favorite family recipe, for example.

The day also features face painting for children and live music, as well as a clam chowder contest. Those wishing to enter have been asked to collect an entry container and rules at the trustees' office. The entry fee is $1.

The Covid-19 pandemic forced a scaled-down contest last year, with contestants submitting videos of themselves at the waterway where their entries were harvested.