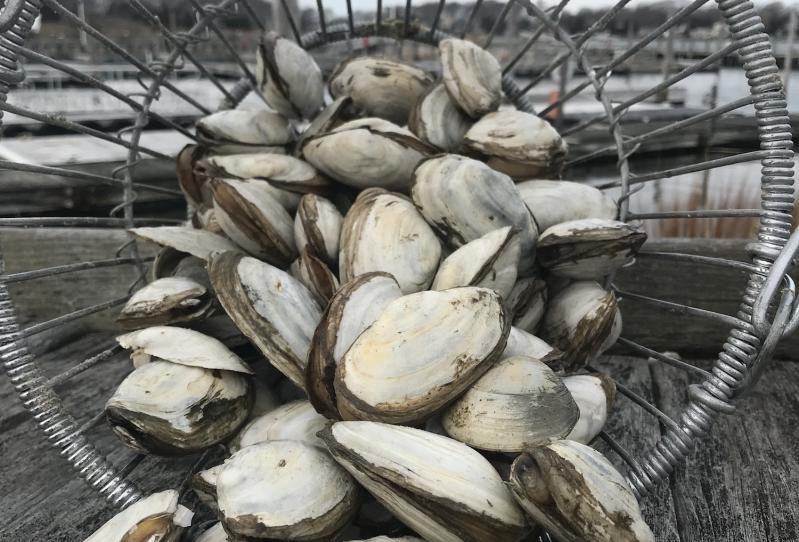 The East Hampton Town Trustees approved a special season and designated areas for harvesting soft clams by a technique known as powering, or churning, last month.

From July 1 through tomorrow, those possessing a 2021 commercial shellfish license are allowed to harvest soft clams in waters certified for shellfishing in Three Mile Harbor and Accabonac Harbor by directing an outboard motor's propeller toward the bottomland to loosen the soil, exposing the clams. From Monday through Sept. 3, license holders can use the technique to harvest soft clams, also called steamers, in Hog Creek and Napeague Harbor.

Powering remains prohibited within 100 feet from either side of a road end or other vehicle access point to a harbor, any area containing eelgrass or widgeon grass, and areas seeded with oysters for the past three years and with clams for the past five years.

At their meeting on Monday, Danny Lester, a bayman who in the spring had requested a powering season, reported his findings and asked that the trustees modify the June 15 resolution authorizing the technique. The resolution specifies that powering is permitted from 9 a.m. to 3 p.m. on weekdays.

"We have to work the tides," he told the trustees. "If high water is at 6 in the morning," and he wants to run an outboard motor, "according to your resolution, I can't go."

More important, "We'd really like to see the program opened year round," Mr. Lester said, at least on a trial basis. He would not power for clams in Accabonac Harbor, he said, because they are found in an area that is open only on a conditional basis. Consequently, many soft clams, which live only for a couple of years, die before they could be harvested, he said.

"You should see the amount of shells that come off the bottom because the clams die," he said. "If we don't harvest them, they're just going to sit there."

Powering is conducive to the sustained health of the population, Mr. Lester said, likening it to tilling soil on land. "The more you turn the bottom over, the more spat's going to go in," he said of shellfish larvae that have attached to a surface. "It's like gardening: You take your garden, you roll it over every year, your flowers grow. Same thing with the soft clams. If the bottom's rock hard, the spat can't get in."

Could he draw a map of where he would like to power, John Aldred asked, one that the trustees and officials of the town's shellfish hatchery could examine? No, Mr. Lester said. "The only way to find them is to look . . . you've got to be able to check everywhere. It's the nature of the beast."

He would gladly report his findings to the trustees, he said, but "here's the thing: I don't want to get stuck on a map of an area, and then next thing you know, I go 30 feet to the other side of that area and the harbormaster's there and writes me a ticket, but there's 100 bushels of clams there, but nobody seeded it." Hence the request for a year-round trial.

Only a few permits for powering have been issued, and Mr. Lester said it was highly unlikely that many baymen would use the technique as all are busy with other fishing activity. "I don't just go clamming," he said. Should the bay scallop population survive to November — after two consecutive years of a massive die-off — baymen will be occupied with that harvest into January, he said.

Jim Grimes, who was presiding in the absence of Francis Bock, the clerk, was receptive to the idea. "We can always evaluate," he said. "If members of the public have an issue, or there's problems that result from it, it's a work in progress."

The trustees agreed to modify the resolution to allow powering from sunrise to sunset, consistent with other shellfish codes.