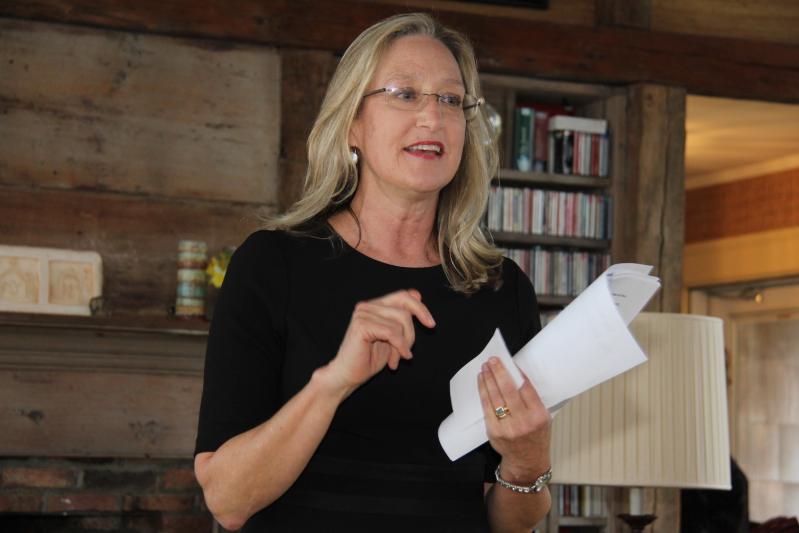 Asserting that "we Long Islanders can no longer be represented by a congressman so entrenched in personal ideology that he was literally willing to throw democracy out the shattered windows of the Capitol," Suffolk County Legislator Bridget Fleming, flanked by Democratic and organized labor leaders, announced her candidacy for the Democratic Party's nomination for New York's First Congressional District on Monday in Patchogue.

Ms. Fleming, who was elected to represent the Second Legislative District in 2015, was a late entrant in the campaign for the party's nomination for Congress in 2020, finishing behind Nancy Goroff, the eventual nominee, and Perry Gershon, the party's 2018 nominee, in the primary election. The Republican, Lee Zeldin, easily defeated Ms. Goroff in the November election, winning a fourth term by a nearly 10-percent margin. In 2018 he had fended off a challenge by Mr. Gershon, winning by four percentage points.

Mr. Zeldin is now seeking his party's nomination to challenge Gov. Andrew M. Cuomo in November 2022. That announcement, which he made on April 10, did not factor into Ms. Fleming's decision, she told The Star on Monday. Rather, she said, it was the congressman's actions surrounding the Jan. 6 insurrection at the Capitol building. Mr. Zeldin, one of former President Trump's most ardent defenders in Congress, voted against the certification of two states' election results hours after the riot, following weeks spent suggesting that the election was illegitimate.

"I started seriously considering this on Jan. 6, when I sat with my legislative team in the district office and watched as Lee Zeldin came back on the floor after a violent attack on the Capitol and continued to solidify his membership in the 'Sedition Caucus,' " Ms. Fleming said. "That's when I began seriously to lay the foundation to seek the support of important leaders in the district, to make sure that we as Democrats can put forward the strongest effort to flip the seat."

"I do not believe that we are fairly represented by someone who puts partisanship over the needs and concerns of our district," she said. Mr. Zeldin's "participation in the Sedition Caucus really confirmed that this is a mismatch," she added. "We in the First District are better than that, and should have a representative who reflects the needs and concerns of the hardworking families and men and women of the district."

"That support can't be gained overnight," Ms. Fleming said earlier in the day. "I've been laying a foundation for this race since January, well before Lee Zeldin started talking about Andrew Cuomo . . . I'm in this regardless of who the Republican opponent is, and I have been since Jan. 7."

"I'm beginning this journey with great seriousness," she told The Star. "I'm optimistic, and at the same time recognize how challenging flipping [the district] will be. We need all the firepower we can muster, which is why I did the work over the course of the last several months in building a foundation of political support so that we can move forward and raise the funds and have the network of supporters that will allow us to bring home a victory."

"What happened in January was extremely dangerous to our democracy," she said. "No matter who's running, whether Lee Zeldin or someone else, I think it's important that you have someone who's really focused on the district and not partisan national politics."

Midterm elections are historically challenging for the party holding the White House, as Democrats do. The Democratic majority in the House of Representatives, already slim, is further imperiled by redistricting based on the 2020 census, with New York losing one seat. "I am clear-eyed about the challenges of this race," Ms. Fleming said. "We know that it's a formidable undertaking, and that's why I'm starting early and didn't announce until I was assured I have a very high level of political support. It's winnable. We're ready to roll up our sleeves and get the work done."

As Ms. Fleming was announcing her candidacy on Monday, the 314 Action Fund, a political action committee that seeks to elect scientists, released results of a poll conducted on its behalf that it said shows Ms. Goroff leading Ms. Fleming by 15 percent in a potential primary election. Asked if she would seek the Democratic Party's nomination again, Ms. Goroff told The Star yesterday that "I have been getting a lot of encouragement from friends and supporters, so I have been considering it."

In the Legislature, Ms. Fleming serves as chairwoman of the Ways and Means Committee, co-chairwoman of the Health Committee, and as a member of the Public Works, Transportation, and Energy; Environment, Parks, and Agriculture; Veterans and Consumer Affairs; Ways and Means, and Public Safety Committees. Prior to her 2015 election, she won a special election to the Southampton Town Board in 2010 and was re-elected to a four-year term the following year. Before entering politics, she was a prosecutor in the Manhattan district attorney's office.
--
Note: This article has been updated since it originally appeared online.