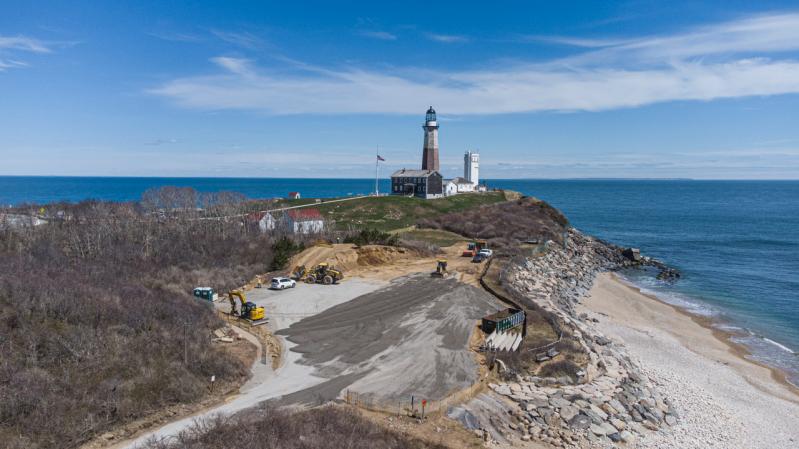 An aerial view of the revetment project that has begun at the Lighthouse.
James Katsipis
By Christine Sampson

A $30.7 million plan to protect the Montauk Lighthouse from shoreline erosion has officially begun.

The Star reported in January that the project is estimated to take two years to complete. Existing armor stones weighing 5 to 10 tons will be removed from about 1,000 linear feet of the sea wall in front of the Lighthouse, to be reused elsewhere. In their place, contractors will install 10-to-15-ton stones.

The Army Corps of Engineers has said the improvements are necessary to prevent the 224-year-old Lighthouse from eventually toppling into the ocean.

Funding for the project comes from a 2013 congressional appropriation in the wake of Hurricane Sandy and from the State Department of Environmental Conservation, which is committing $15.4 million.

After the work is done, the Montauk Historical Society -- which acquired the Lighthouse property from the Coast Guard in 1996 -- will be responsible for maintaining the new revetment.

In 2019, the East Hampton Town Board granted the New York State Department of Environmental Conservation and the Army Corps of Engineers a temporary access easement, allowing the Corps to establish a staging area  south and west of the Lighthouse. There will be limited public access for the duration of the project, but surfers and fisherman have been assured that the temporary easement is supposed to provide some access to the beach at all times.