An innovative civilian-government alliance will tackle 'the hard part' 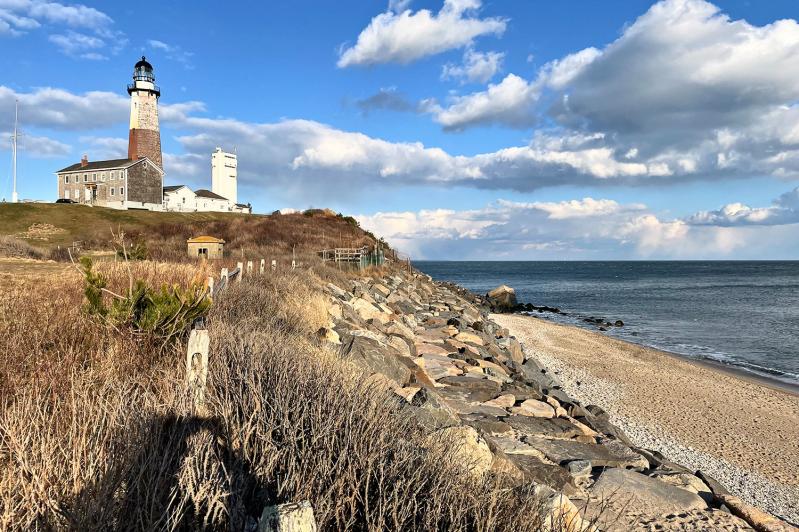 A two-year project to rebuild and bolster the stone revetment protecting the Montauk Lighthouse is to begin in the spring.
Jane Bimson
By Christopher Walsh

A long-planned project to protect the Montauk Lighthouse and its outbuildings from shoreline erosion moved toward fruition last Thursday.

According to an announcement from Gov. Andrew M. Cuomo, H&L Contracting of Bay Shore has been awarded a $30.7 million contract to protect the Lighthouse through an extensive reconstruction of the rock revetment that wraps around Montauk Point. The estimated two-year project to safeguard the national historic landmark is expected to start this spring.

The project includes the removal and reuse of existing 5 and 10-ton armor stones and the placement of new 10 and 15-ton stones along some 1,000 linear feet of the stone sea wall, as well as slope stabilization, using terracing and vegetation, above its upper crest. Over the years the Montauk Historical Society, which acquired the site from the Coast Guard in 1996 and is the project's local sponsor, has extended the rock bulwark to about 1,300 feet in length. The society will maintain the site after construction is completed.

Along with the Lighthouse tower and keeper's house, the complex includes a fire control tower, a garage, which served as an earlier keeper's house, and several archaeological sites. According to the U.S. Army Corps of Engineers, reconstruction of the revetment is necessary to keep the 224-year-old lighthouse from toppling into the Atlantic Ocean.

Partial funding for the project came from a 2013 congressional appropriation in the wake of Hurricane Sandy. The State Department of Environmental Conservation is committing $15.4 million as the project's non-federal sponsor.

Since securing state and federal support for the project, the Corps of Engineers and partners have been working to secure bids and access agreements, according to a statement from the governor's office. The East Hampton Town Board voted in 2019 to give the D.E.C. and the Corps a temporary access easement, allowing the Corps to establish a staging area  south and west of the Lighthouse. The area was used for the same purpose during past work on the revetment.

The staging area will remain through the duration of the reconstruction. The agreement allows for "modest widening of the road and improvement to the road, in terms of adding gravel and stabilization in order to allow large trucks to traverse that driveway."

At the Montauk Firehouse in 2018, Frank Verga, project manager in the New York District of the U.S. Army Corps of Engineers, described a design featuring stone blocks placed on top of a layer of smaller material, forming the revetment's forward-facing section. A sloping "apron" will surround that, extending down and partially buried in the seabed. The work will be conducted in sequence, he said, beginning with a 20-foot-wide flat "bench," or road-like platform, about 10 feet above sea level, from which heavy equipment will install the stone apron. The bench will remain once construction is done, and a second will be built about 10 feet higher to better protect the bluff, giving the sea wall a step-like profile.

The plan has been in the works since conceptual approval to rebuild the revetment in 2005, Mr. Verga said. That never came to fruition, but an environmental impact statement prepared at the time was later updated.

The Montauk Lighthouse was commissioned by George Washington. It was constructed in 1796 approximately 300 feet from the receding edge of the bluff. It now sits less than 100 feet away, with only the failing revetment protecting it from extreme weather events and the ocean's relentless waves.

In 2016, a law sponsored by Assemblyman Fred W. Thiele and now-former State Senator Kenneth LaValle authorized the D.E.C. to undertake projects protecting national historic landmarks from erosion. Previously, state agencies were not allowed to partner with not-for-profit organizations, such as the historical society, on such ventures.

"It's easy to be a cynic in this day and age with government," Greg Donohue, the society's director of erosion control, said Tuesday. "I've been working with the Army Corps of Engineers for 29 years on this. I've seen seven of my comrades, friends and professionals, retire!" But, he added, "the coming together of this project is nothing but a civilian-government alliance that is working on every level. I'm very happy. Now the hard part starts."

Mr. Donohue, the historical society's liaison with the contractor and the D.E.C., is confident that the society can manage the maintenance costs, citing "an erosion control kitty" that will ensure it. Future storms will not take down the entire sea wall, he said; rather, small sections will be repaired as needed. "We don't need $1 million in escrow."

While public access will be limited for the duration of the project, Councilman David Lys assured fishermen and surfers when the temporary easement was approved in 2019 that "there will be temporary access to the beach at all times." While the construction area will be off limits, said Mr. Donohue, "they will be able to fish down from the point and on the north and south side. Surfers, they know how to get out to that wave break. I am there to see to it that with fencing and signage, we can co-exist . . . I am taking very seriously surfers' and fishermen's rights."