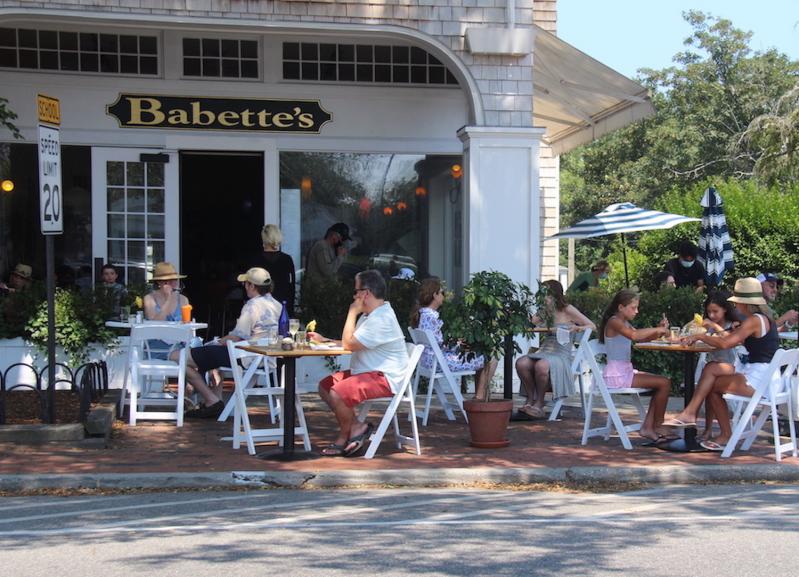 Outdoor dining, a hit at places like Babette's, which was able to add more sidewalk tables last summer, may be here to stay in East Hampton Village, but with new regulations.
Durell Godfrey
By Jamie Bufalino

A proposal that would allow outdoor dining to become a post-pandemic fixture in East Hampton Village's commercial district and at its historic inns was introduced at a village board meeting on Thursday and will be the subject of a public hearing on Friday, April 16.

At the height of the pandemic last year, when indoor dining at restaurants was prohibited by the state, Richard Lawler, the former mayor, issued an executive order that allowed restaurants and food stores to apply for permission to create temporary outdoor dining areas on public property. Since taking office in September, Mayor Jerry Larsen has continued to extend that order.

The proposal presented on Thursday would codify the permit process, and allow restaurants and food stores in the commercial district to use adjacent public property to operate a "sidewalk cafe area" annually between April 15 and Nov. 15. Restaurants with private outdoor spaces -- including in residential neighborhoods such as at the Hedges Inn, and the Maidstone hotel -- would be allowed to have a designated area "where patrons may sit at tables while consuming food and beverages served by a waiter or waitress." The seasonal permit would not provide a "vested right" to outdoor dining, however, the proposal says.

The building inspector would be given authority over permit approval, including the authority to regulate the design, layout, materials, colors, and appearance of the dining areas. The chief of police and fire marshal would also weigh in on applications.

Applicants would be required to provide a seating layout that allows for proper ingress and egress, and at least six feet of unobstructed sidewalk width; depictions of proposed furniture (umbrellas without advertising on them would be permitted, picnic tables would not); a plan for installing an "architectural barrier such as floral arrangements . . . or decorative fencing" that would serve as an enclosure, and a litter control plan that includes the number and location of trash receptacles. A fine of at least $100 would be incurred for failing to abide by the litter control plan. Businesses would be required to meet capacity limits by tying an increase in outdoor seating to a reduction in indoor seating, and temporary lighting would be required during evening hours.

The building inspector would decide the hours of operation for each outdoor dining area by taking into consideration "the nature of the restaurant or retail food establishment . . . the character of the [adjacent] neighborhood . . . and the character and nature of other uses in the vicinity of the premises at varying times of day." Tables, chairs, and other items would have to be removed from the outdoor area one hour after the close of business.

Owners could apply for the use of tents or igloos with heating and cooling equipment as long as they provide documentation that the structures can withstand the elements, are compliant with the fire code, and have lighted exit signs and pathways, among other requirements. Although the proposal doesn't prohibit the structures from being used in the heart of the commercial district, Tom Preiato, the building inspector, made it clear at the board meeting that he would not allow them on sidewalks.

The managers of the businesses would be required to keep the areas clean, and to supervise patrons. "Any behavior that disturbs customers or passers-by . . . will constitute grounds for revocation" of a permit, the proposal says. For outdoor areas on public property, the village would also reserve the right to temporarily suspend a permit when access to the sidewalks is necessary for street repairs or during a festival, parade, or other event.

Sandra Melendez, a trustee, suggested removing the prohibition against picnic tables to allow restaurants that have access to private spaces such as Fresno, Rowdy Hall, and Dopo La Spiaggia, the option to use them.

Rose Brown, another trustee, recommended the board provide specific guidelines on operating hours, the look of the architectural barriers, and the time frame for allowing tents, but Vincent Messina, a lawyer for the village, said the intent is to give the building inspector the discretion to decide on a case-by-case basis which applications would pass muster. "It's their proposal to make, and then the building inspector will determine the validity of that proposal," he said.

If Mr. Preiato nixes an application, owners would be able to appeal first to the zoning board of appeals, and then to the board of trustees.

"I like it. It's very well done," Mayor Larsen said of the proposal.