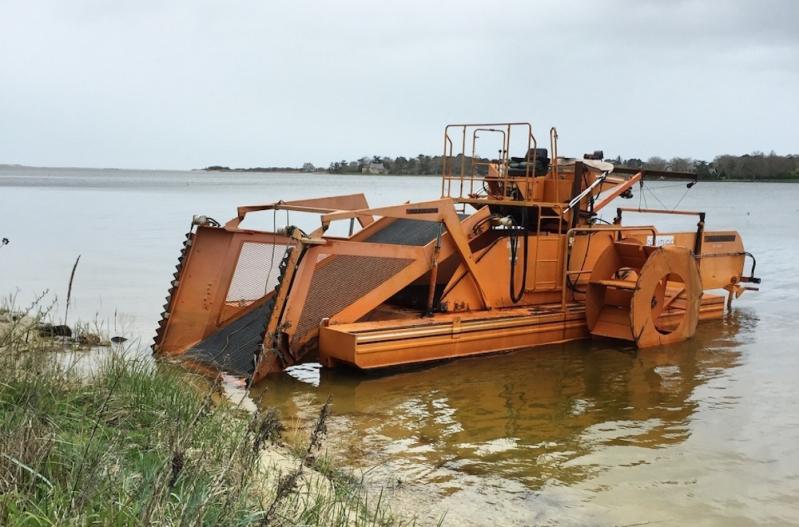 The Georgica Pond weed harvester was used in 2016.
By Christopher Walsh

The East Hampton Town Trustees have given unanimous approval to the Friends of Georgica Pond Foundation, a group of pondfront property owners, to employ an aquatic weed harvester to extract plant material from the pond this summer, continuing an action that in the past has had measurable results in discouraging the harmful algal blooms that have fouled the 380-acre water body over the last several years.

Georgica Pond is eutrophic, with excessive nitrogen inputs from ground and surface water runoff feeding dense plant life, the decomposition of which is blamed for choking the pond of oxygen. Blooms of macroalgae and macrophytes have resulted in hypoxia, or low levels of dissolved oxygen, which promotes fish kills and algal blooms.

Use of the harvester requires permits from the town, which prohibits motorized craft on the pond, and the New York State Department of Environmental Conservation. It extracted plant material from the pond on an experimental basis in 2016, 2017, and 2018, and was used again, under a D.E.C. emergency authorization, in Georgica Cove in August of last year because of a sizable outbreak of macroalgae.

The harvester is part of a multifaceted remediation effort that also involves reducing surface water runoff at areas including the rest stop on Montauk Highway near the East Hampton Village-Wainscott border, more ecologically sound property management such as discouragement of the use of lawn fertilizers and synthetic chemicals and the creation of vegetative buffers, and the replacement of aging septic systems within the two-year groundwater travel time in the pond's watershed with new models that dramatically reduce the leaching of nitrogen. Around one-third of the approximately 75 properties around the pond have done so, according to Sara Davison, executive director of the foundation.

Macrophytes, aquatic plants large enough to be seen by the naked eye, have grown in the pond in recent years "so thick you can't even sail a boat," Ms. Davison told the trustees during their virtual meeting last week. Removing the plant material, she said afterward, is particularly helpful in lowering phosphorus levels in the pond, which along with nitrogen can trigger blooms of toxic cyanobacteria, or blue-green algae.

Results of the harvester's work were "quite striking" and "very, very promising as a short-term, efficient way to reduce nitrogen and phosphorus" in the pond, Ms. Davison said.

The foundation's members hope that the D.E.C.'s tidal wetlands permit and town's natural resources permit will be in hand by summer. "We are cautiously hopeful that we can get the harvester back on the pond," Ms. Davison said.

In anticipation, she asked the trustees, who have jurisdiction over the waterway, to pass a resolution authorizing the use of the harvester between June 1 and Sept. 30 as well as a motorized skiff, with which Bradley Peterson of Stony Brook University's School of Marine and Atmospheric Sciences would lead pre and post-harvest surveys of aquatic vegetation, fish, crabs, and invertebrates.

The trustees' resolution authorizes the continuation of the harvester's use between Monday and Friday for a total of seven and a half hours per day, as well as the use of the skiff.

In related news, Christopher Gobler, also of the School of Marine and Atmospheric Sciences, is scheduled to report findings from his 2020 water-quality monitoring of waterways under trustee jurisdiction at the body's next meeting, on April 12.

Petition to Speed Up Sand Replenishment in Montauk
Artistic Portraits of M.L.K. Up for Auction on Saturday
Wine Tasting for Lions Club
END_OF_DOCUMENT_TOKEN_TO_BE_REPLACED