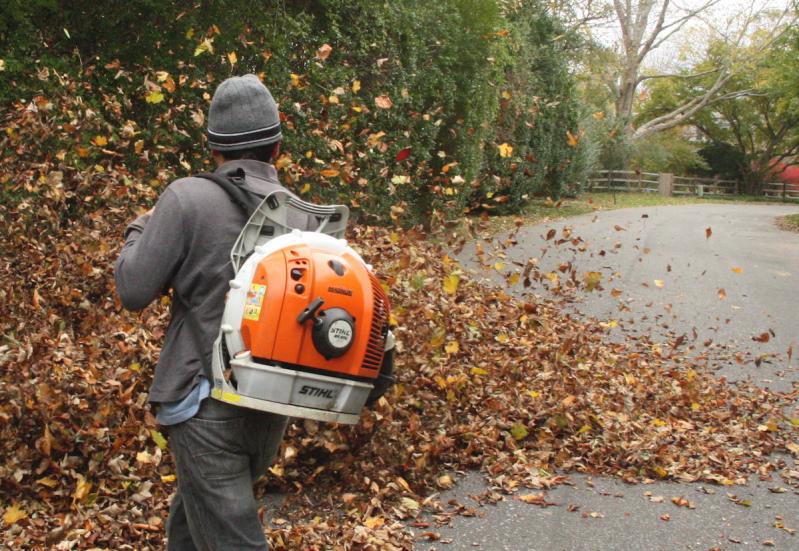 Gas or diesel-powered leaf blowers will be prohibited from May 20 to Sept. 20, and allowed only at certain times between Sept. 21 to May 19.
Durell Godfrey
By Christopher Walsh

The East Hampton Town Board voted unanimously last Thursday, with one qualifier, to amend the town code pertaining to landscaping and gardening by restricting the use of leaf blowers.

Aimed at reducing pollution and noise, the legislation prohibits the use of gas or diesel-powered leaf blowers from May 20 to Sept. 20. From Sept. 21 to May 19, they are prohibited before 8 a.m. or after 6 p.m. on weekdays, before 9 a.m. or after 5 p.m. on Saturdays, and on Sundays and federal and New York State holidays unless operated by the property owner or tenant, and only between 9 a.m. and 3 p.m.

Councilman David Lys voted no on the latter provision, having previously objected to restricting the use of leaf blowers by residents for whom Sunday may be the only opportunity for yardwork.

The legislation also establishes a licensing requirement for commercial landscapers engaged in property maintenance, and is intended to encourage "green" landscaping practices such as the use of electric leaf blowers, which are free of emissions and quieter than their fossil fuel-powered counterparts.

No walk-behind gas or diesel-powered leaf blowers may be used on a property except those greater than one acre, and no more than two leaf blowers of any type may be used at the same time except on properties of that size. Gas or diesel generators may not be used to power electric leaf blowers.

Exceptions exist for times of emergency as determined by executive order of the supervisor, who may also grant a temporary permit to allow the use of gas-powered leaf blowers to accommodate a special circumstance such as an abandoned or neglected property, cleanup following a severe storm, or an emergency situation that presents a danger to public health and safety.

Also at the meeting, the board voted to amend the zoning code to designate Second House and a barn on the Montauk property as historic landmarks. Robert Hefner, the town's historical designation consultant, had recommended the designation last year, following his 2016 report stating that in its present state Second House more closely resembled an early-20th-century summer cottage than the residence of livestock keepers it was in the 18th and 19th centuries.

The structure is undergoing a renovation to return its appearance to that of 1886, when George A. Osborne, the last keeper employed by the proprietors of Montauk, departed.

It had come as a surprise to the board that Second House, originally built in 1746 and replaced in 1797, had not been designated a historic landmark in the half-century since the town and the New York State Historical Trust bought the property. "I think everybody was operating under the assumption that one of our most historic buildings in town was already under that designation," Mr. Van Scoyoc said.

The board also voted unanimously to accept the Police Reform and Reinvention Plan, as recommended by a committee comprising a diverse group of residents. The committee's recommendations were based on results of a communitywide survey and a youth survey, and followed listening and public comment sessions as well as discussions with Chief Michael Sarlo of the Police Department.