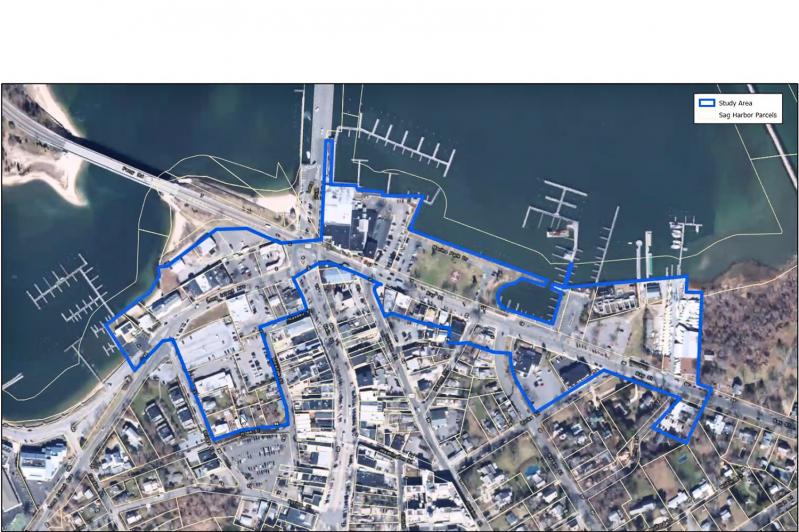 Consultants hired by Sag Harbor Village to write a new zoning code for waterfront development presented a first draft at a village board meeting on Jan. 27.

The proposed Sag Harbor Waterfront Overlay area would include the Long Wharf shops, the Breakwater Yacht Club, and properties on Bay and West Water Streets, including the Beacon restaurant and the West Water Street Shops, a more than 15,000-square-foot building that will be the future home of the Bay Street Theater. Properties on Main Street would not be part of the overlay, but a section of the commercial area to the west, which includes the post office and parking lots, would be.

The Nelson, Pope, and Voorhis engineering firm, together with the Form Based Codes Institute, a nonprofit organization that helps municipalities establish laws to guide the shape and size of buildings, and Chuck Banas Design, a planning firm based in Buffalo, developed the new code. It is designed to protect the village's character, to enhance and protect water access and viewsheds, and to create a pedestrian-friendly and coherent streetscape, said Chris Hawley, a city planner with Chuck Banas Design.

The overlay would contain four zoning districts: village business, office, waterfront, and parks and conservation, and the law would allow for three building types (each with specific design standards) within the latter three: a mixed-use building with "an active ground story," a "general building" for one predominant use such as offices or "hospitality," and a "civic building" to be used as a museum, art gallery, library, theater, or some other public gathering space. The "general building" type would not be allowed on properties zoned for village business.

To protect water access, all new development on waterfront lots would have to provide a 30-foot "yard," or open area, between "the mean high water line of [the bay] and the waterside facade of the principal building." A "visual access yard" that provides an unobstructed water view would also be required on those lots, and on lots that abut public parks, such as Steinbeck and Marine Parks. The size of the required visual access yard would be "at least 20 percent of the lot width, but not less than 15 feet for any individual lot."

To prevent oversized buildings along the waterfront, the code would set a maximum building height of 25 feet, and only two stories, unless the developer provided public waterfront access and at least three other benefits, such as installing environmentally-friendly building systems and sustainable landscapes, producing renewable energy, conserving water, preserving historic resources, providing public art, exceeding the federal government's requirements for providing access to those with disabilities, restoring wildlife habitats and natural vegetation, or providing facilities for waterfront recreation. If those conditions were met, a developer could receive a "height bonus" for an additional story and 10 feet in height, as long as the third story was set back 10 feet to reduce looming overhead.

In reaction to the fear that the waterfront could be walled off by condominium development, the code would prohibit residential uses on properties north of Bay Street and Long Island Avenue, Mr. Hawley said.

It would do away with the existing code's minimum floor area of 800 square feet for commercial uses in the village business district. "Commercial uses should be allowed to be as small as is practicable," he said. "There's nothing wrong with a 150-square-foot gelato store."

One controversial regulation it would not replace, however, is a requirement that all new construction provide off-street parking. For a theater, the code requires one space for every three permanent seats, plus one for each employee.

Tracy Mitchell, the executive director of Bay Street Theater, said that provision could threaten the viability of the new theater, and has urged residents to voice their objection to it. "Please join us in asking the trustees to eliminate these parking regulations for the Waterfront Overlay District so together we can enjoy our waterfront and ensure Bay Street Theater's future," she wrote in an email to patrons.

The new code will be introduced as a proposed law at Tuesday's meeting of the village board.