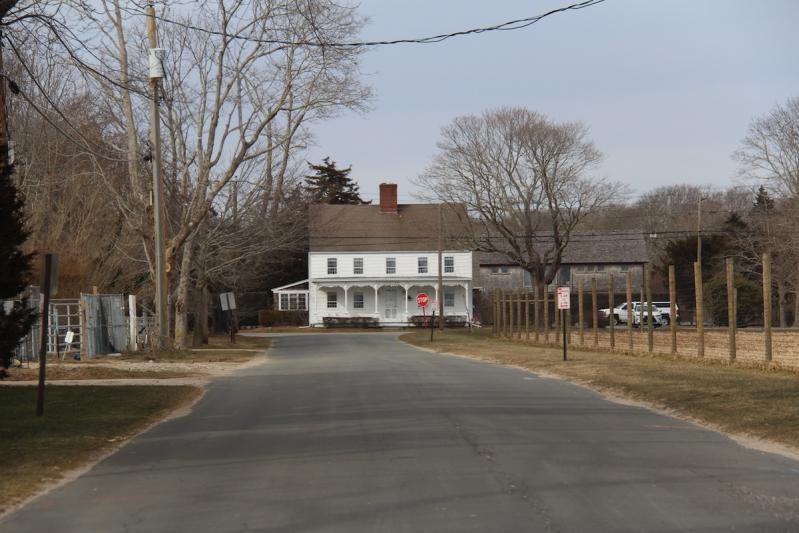 Under an agreement East Hampton Town reached with the developers of the South Fork Wind farm, an export cable from the offshore installation would travel underground down Beach Lane in Wainscott before heading to a Long Island Power Authority substation in East Hampton.
Durell Godfrey
By Christopher Walsh

Charging "bad faith, authoritarian motives, and irrationality," Citizens for the Preservation of Wainscott filed a lawsuit on Tuesday in State Supreme Court, Riverhead, against the East Hampton Town Board, Supervisor Peter Van Scoyoc, and South Fork Wind. The action follows the town board's Jan. 21 approval of an easement allowing the developers of the proposed South Fork Wind farm to land an export cable on a Wainscott beach and then bury it under town-owned roads on its way to a Long Island Power Authority substation in East Hampton.

Tuesday's move by the group, a well-funded effort to thwart the cable's landing in the hamlet, follows its delivery of a petition seeking to form an incorporated Village of Wainscott. The supervisor has scheduled a public hearing tomorrow, as required under state law, to determine the validity of the petition. The hearing is covered elsewhere in this issue.

The lawsuit charges that the town "improperly rushed the grant of easement prior to the completion of the environmental and regulatory process." It further maintains that the town board's approval of a host-community agreement, which would see the town and the town trustees sharing around $29 million over the project's 25-year life span, is "a grab for money" intended "to end-run the Wainscott community's effort to incorporate as a village."

The proposed wind farm is under review by the New York State Public Service Commission and the federal Bureau of Ocean Energy Management. "Because there will be significant and protracted state and federal administrative proceedings that will, among other things, bring important facts to light, local government leaders would be expected to withhold judgment," the suit says, "and commit themselves only when necessary, preserving their latitude to act as ultimately may be appropriate, with full knowledge of the project's impacts, environmental and otherwise."

Instead, the plaintiffs charge, "the board has bound itself and its citizens before material facts are known and long before a grant of the easement would be needed for the project to proceed. In doing so, the board has acted illegally, arbitrarily, and capriciously, exposing the community it serves to unnecessary risks and limiting its ability to protect the town's interests during the ongoing regulatory proceedings."

Granting the easement, the plaintiffs continue, "was motivated by an undemocratic desire to quash a current, home-rule movement by residents of Wainscott to incorporate as a village, and thus deny the new Village of Wainscott control over whether the easement should be granted."

In addition to Citizens for the Preservation of Wainscott and 31 individuals, the Dune Alpin Farm Property Owners Association Inc. and Dune Alpin Farm Corp. are listed as plaintiffs.

The town board voted 4-to-1 in favor of granting the easement, and 4- to-0 in favor of the host-community agreement. Councilman Jeff Bragman voted against the easement agreement and abstained from voting on the host community agreement, arguing that the town would maintain leverage, and therefore its ability to influence the project, by waiting until state and federal reviews are completed. Mr. Bragman also argued that many pertinent questions as to environmental review and the installation's potential impact on the commercial fishing industry remain unanswered.

The trustees voted unanimously on Jan. 25 to allow the cable to run under the beach, over which they have jurisdiction, and to accept both the host community and the revenue-sharing agreements.

The lawsuit repeats a litany of criticisms of the cable-landing site. Citizens for the Preservation of Wainscott claims that installation will take 30 months, far more than has been indicated by the developers, Orsted U.S. Offshore Wind and Eversource Energy. The hamlet will be subject, the group alleges, to "invasive maintenance work over 25 years," and fire and building safety will be compromised by construction on narrow Beach Lane.

The suit further notes that trenching on Wainscott Northwest Road "will be adjacent to the Wainscott Sand and Gravel site and just south of the East Hampton Airport, which is where 47 acres were recently designated as a New York State Superfund site" due to contamination by perfluorinated chemicals. Excavation within a contaminated plume "could become a pathway for movement" of contaminated groundwater, contaminating new areas, it says.

Stressing that it does support renewable energy, the group has suggested the wind farm's cable land instead at Atlantic Avenue Beach in Amagansett. The lawsuit "focuses solely on the cable landing route" and substation, according to a statement accompanying the complaint, and "does not seek to stop the already-delayed wind farm project itself." The wind farm's developers have pushed back its expected date of operation by one year, to late 2023, pending the granting of the required approvals.

"We all support renewable energy," Gouri Edlich, the group's chairwoman, said in the statement, "and we want to see that goal completed. But there are better ways to accomplish this important goal."

Mr. Van Scoyoc said on Tuesday morning that he had not seen the complaint, but that a lawsuit from the citizens group would not be a surprise. "They've been threatening this for some time," he said. "I don't know based on what parts of the law they think they have a case, if you will. We'll certainly look at it and prepare to vigorously defend the town."
--
Note: This article has been updated since it originally appeared online.