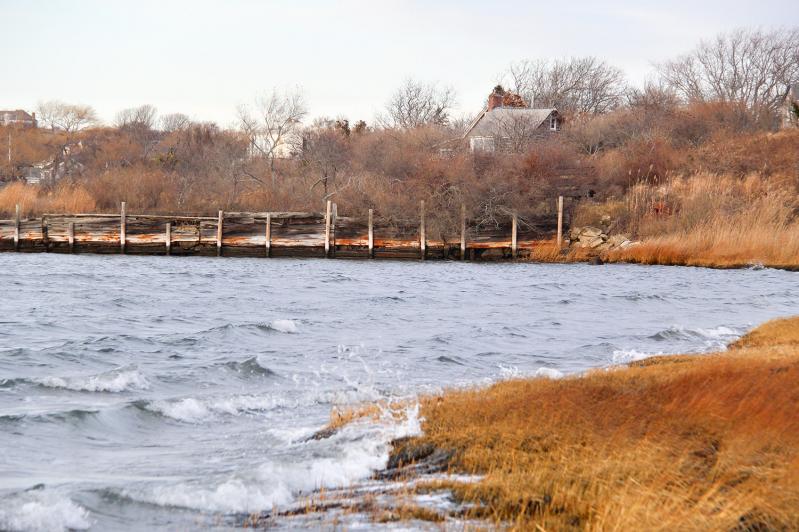 Town planners would like the deteriorating bulkhead at this property on Lake Montauk removed so that the shoreline could return to its natural state.
Durell Godfrey
By Christopher Gangemi

A deteriorating bulkhead on Lake Montauk and lingering questions about a large yoga pavilion are the main sticking points for a proposed “artists’ retreat” that would involve the complete reconstruction of 17 cottages and a large single-family house at 31 East Lake Drive in Montauk.

The owners, David and Monica Zwirner, will subsidize the rental fees for the 17 cottages, to be known as the Bridgeford Cottages, “to ensure that artists, many of whom could not normally afford such a retreat, will be able to come and enjoy the natural beauty of Montauk while they work.” The idea is that “artists will find time in the quiet and peaceful natural surroundings” to create meaningful art. Visual artists, as well as writers and poets, would be invited to stay.

Mr. Zwirner is a gallerist with multiple galleries in New York, London, Paris, and Hong Kong.

Barefoot poets and plein-air painters living in a randomly-arrayed collection of cottages surrounded by grass paths and native plantings sounds like a dream, especially compared to some of the proposed party-scene developments along East Lake Drive to the north. So, what’s the problem?

The Planning Department recommended the removal of the bulkhead. Bulkheads are built along the high-tide line to help prevent erosion. However, should they collapse, everything behind them pushes down into the waterway. The Zwirners would rather replace than remove the retaining wall. To do so would require a variance from the Town’s Coastal Erosion Overlay District regulations.

At the first planning board review in March of 2021, board members had a negative reaction to any work along the shore. They advocated for a removal of the bulkhead and a return to the natural shoreline. As a result, the Zwirners removed any coastal work from their plan.

“They’re just going to leave everything as it is,” said Britton Bistrian, who presented their application to the board.

“So they’re going to leave the bulkhead as it is?” asked Samuel Kramer, the chairman of the planning board. “It’s going to fall apart,” he said.

“We don’t like the rebuild,” said Ian Calder-Piedmonte, a planning board member, “but I’m not sure the intention was to just leave it.”

Brian Frank, the lead planner for the town on this application, said it would be logical to remove the retaining wall when the heavy construction equipment was on the property during its redevelopment. “Eventually,” he said, “it will collapse.”

“There is no doubt it makes the environment better by removing the bulkhead. The benefits are enormous,” said Mr. Frank.

In an email, Mr. Frank explained that the bulkhead “is located in a low wave energy portion of the harbor where there isn’t any significant erosion, and the bulkhead doesn’t protect any upland structures.” If it fails, “because they are in a Coastal Erosion Overlay Zone that prohibits the reconstruction of bulkheads, etc., without a variance,” it may be difficult for them to get the permit to replace the wall.

In that scenario, the Zwirners would be responsible for the cleanup of the lake and would have to return the shoreline to its natural state anyway.

Mr. Calder-Piedmonte expressed the need for some sort of plan moving forward. The bulkhead was a big piece of the puzzle for the redevelopment of the land, he said, and it didn’t seem smart or logical to “kick that can down the road.”

“We’re sort of at a stalemate on that particular issue,” said Ms. Bistrian. The board moved on.

Mr. Frank, in his site plan review, stressed the need for a more definitive narrative about how the property would be used. The idea of 17 cottages occupied by artists, separated by a hedge and a stone’s throw from a yoga pavilion, large pool, and large house owned by an international art dealer, raised the specter of mixed uses to the board.

“The pavilion that we’re looking at,” said Ed Krug, a board member, “it’s a pretty big amenity for a single-family house, right?” He continued, “There are two showers, two bathrooms, two sinks, 600 square feet of yoga space. That’s pretty alluring to an artists’ retreat.”

“What happens if a cottage person says they want to swim in the pool and do yoga in the pavilion?” wondered Randy Parsons, another board member.

“If they sell it in two years,” said Kathy Cunningham, the board’s vice chairwoman, “who knows what will come take its place?”

The board sought clarity and a covenant to make sure that the residence couldn’t become part of the commercial use of the property. Ms. Bistrian argued that the pavilion was intended for the owners’ private use. She said they would have no problem signing a covenant saying that the house, and

pavilion, would not be used for commercial purposes.

The board also touched lightly on an existing road that leads from the property down to the lake. The road is currently a mixture of aging asphalt and gravel. Any paving would lead to runoff into the lake.

Ms. Bistrian explained that the Zwirners planned to remove the asphalt and have the road kept as a grassy path down to the lake so that small crafts, such as kayaks, could be launched at the water’s edge. “They do not want to give up vehicular access to the beach, which is traditional at this site.”

“I’d be happy if it wasn’t going to be paved,” said Mr. Parsons. The board agreed.

“I think the applicants did an amazing job,” said Ms. Cunningham. “I’m very encouraged by that, but I think there’s still a way to go.”