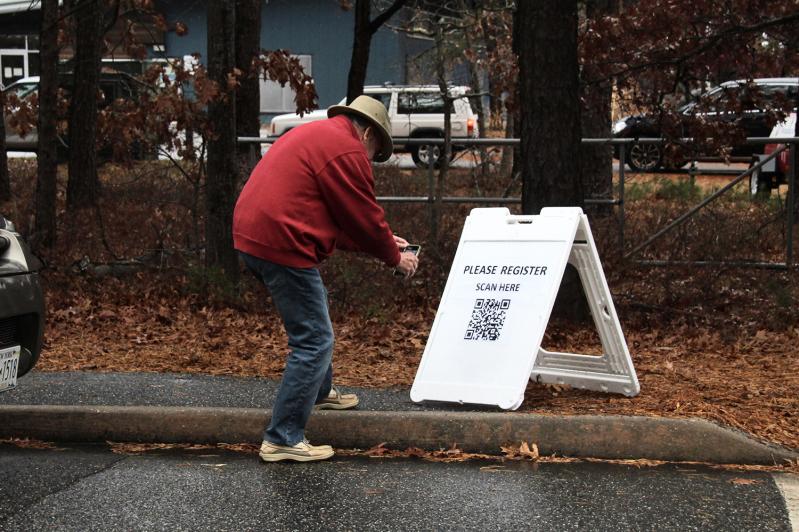 Appointments are not required for Covid-19 tests at East Hampton Town’s Center for Humanity on Stephen Hand’s Path, but the site, which normally operates Monday through Saturday, will be closed tomorrow and Saturday for New Year’s.
Durell Godfrey
By Christopher Gangemi Christopher Walsh

As Covid-19 cases have risen, demand for testing has too, with long lines reported at East Hampton Town’s test site at its Center for Humanity on Stephen Hand’s Path, run by CareOne Concierge, and the town warning that results may be slower in coming — and that testing materials are in short supply. The facility was closed Thursday to patients seeking tests for that reason.

The site is generally open 9 a.m. to 5 p.m. Mondays through Fridays and 10 a.m. to 2 p.m. on Saturdays, but will be closed Friday and New Year’s Day. P.C.R. saliva and nasal swab tests are offered, with rapid tests also available but in more limited supply due to high demand. There is no out-of-pocket cost for P.C.R. tests; rapid tests cost $109, or $59 for East Hampton Town or East Hampton Village employees. Appointments are not required.

Supervisor Peter Van Scoyoc was to participate in an emergency conference call with his counterparts across the county on Tuesday, he said, noting that “we are the only town in Suffolk County to offer testing to residents, and only the second on all of Long Island.” Access to testing, and accurate and rapid results, are “a crucial part of combating Covid,” he said, “but with the huge surge of people” with the Omicron variant, and the added pressure of influenza and the common cold, “any symptoms are driving people to [testing] centers. Add to that the holiday season, where people want to get tested ahead of travel and have holiday gatherings, and you have a perfect storm.”

The town does not have plans to reopen a Montauk test site in the near future. It had a site at the Montauk Playhouse until October, but when it contracted with CareOne to take over testing, the company didn’t see enough demand in Montauk to justify staffing a site there, according to the supervisor.

“Obviously, we are hearing from people all over about access to testing,” Mr. Van Scoyoc said. “And that’s all over Long Island, New York City.”

“I understand that things are crazy,” said Fallon Nigro, “but it’s really frustrating. We shouldn’t be second-class citizens because we’re in Montauk. I’m grateful for all the stuff the town does do, but this is one thing that’s driving me bonkers.”

“The East Hampton site is a mess,” she said. “To get the results of a P.C.R., it takes four to five days. By the time you get your results, your quarantine is over, anyway.”

“We’re used to driving an hour to get toothpaste,” said Logan Erb, another Montauk resident. “But for what they’re rightfully saying is one of the biggest health care crises of our lifetime, you would think there’d be access to easy testing, and there just isn’t.”

“We recognize it is inconvenient for people to wait in line, and if there is some travel involved from Montauk, we appreciate that, but due to resources now, I don’t think we’re going to be able to provide testing in Montauk,” Mr. Van Scoyoc said.

He pleaded for patience. A lot of test site staff “are traveling two hours in the trade parade,” he said, “and then standing in the cold for hours, and then are abused by frustrated people. Everybody needs to try and be patient and considerate for each other.”

Testing is also available through East Hampton Family Medicine, at the Bridgehampton Urgent Care operated by Northwell Health, at Stony Brook Southampton Hospital’s Parrish Memorial Hall, at Southampton Urgent Care, and at Northwell Health’s Peconic Bay Medical Center in Riverhead, with prices varying. The town has a list of contact information for each on its website at bit.ly/3FEkoiL.

Gov. Kathy Hochul said Monday that the state is deploying at least 3 million test kits, each with two tests, to schools. “It’s really an all-hands-on-deck operation to keep kids in school, said Jackie Bray, commissioner of the State Division of Homeland Security and Emergency Services, “and it’s our responsibility to supply as many of our districts as we possibly can so that they can supply as many kids as they possibly can with kits.”