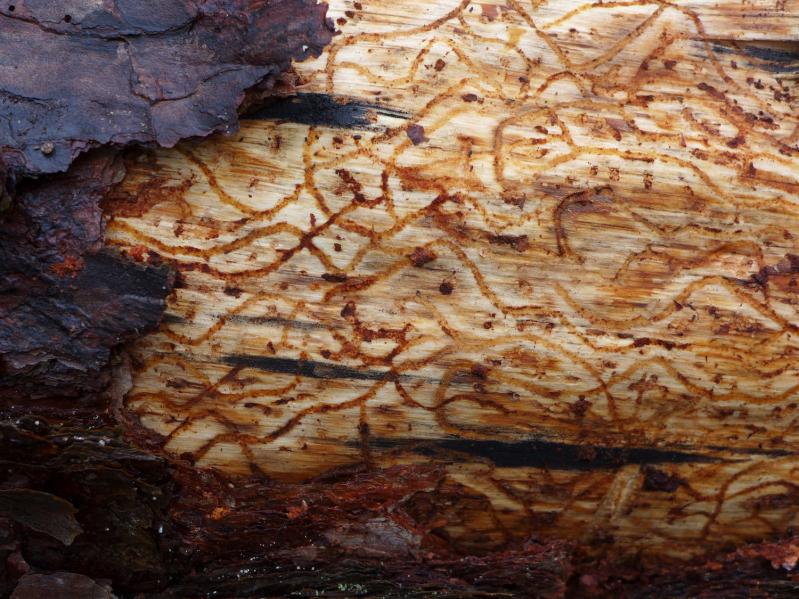 The trail of southern pine beetles beneath the bark of a dead tree
David E. Rattray
By Christopher Walsh

Officials of East Hampton Town’s land acquisition and management department had warned in September of the likelihood of the geographic expansion, and the State Department of Environmental Conservation confirmed it in October, a D.E.C. spokesman said Tuesday. “At that time, there were approximately 300 affected trees,” he said. The invasive species was first detected in the town in 2017.

As the infested area is state parkland, the town cannot take unilateral action, Supervisor Peter Van Scoyoc said last week. Andy Gaites, principal environmental analyst in the Land Acquisition and Management Department, said on Tuesday that the town has not yet conducted a full inspection of the property, so the extent of infestation is not known. “We have offered town staff assistance for inspection/marking trees,” he said.

The D.E.C. and the state’s Office of Parks, Recreation, and Historic Preservation are currently working together on a management strategy for Napeague, with treatment planned for 2022, the D.E.C. spokesman said.

Mr. Gaites and Scott Wilson, the Land Acquisition and Management Department’s director, told the town board in September that the infestation in East Hampton’s Northwest Woods that has seen thousands of pine trees either killed by the beetles or felled and removed to suppress their spread had expanded into Wainscott. More than 500 trees had been marked during an inspection of the East Hampton Airport property there, most of them on either side of Industrial Road, Mr. Gaites said at the time.

A D.E.C. official, speaking on background, told The Star in September that the agency has prioritized suppression efforts within Long Island’s Central Pine Barrens, the largest intact pine barrens ecosystem on the Island. Southern pine beetle management on the South Fork has been a secondary objective, as it is eastward and beyond the Central Pine Barrens and the ecosystem is fragmented. D.E.C. crews have, however, conducted some suppression efforts in Northwest Harbor County Park, Barcelona Neck State Forest, and smaller public lands in the town.