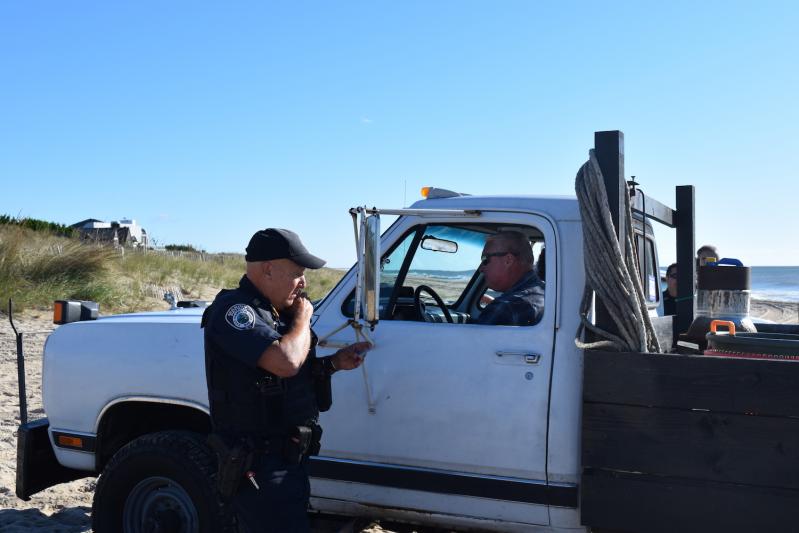 East Hampton Town had stationed Marine Patrol officers at the entrance to the beach on Oct. 17 and issued criminal trespass citations to 14 protesters as they left the beach.
Christopher Walsh
By Christopher Walsh

Attorneys for East Hampton Town are opposing a motion by plaintiffs in the long-running Truck Beach conflict to move the Oct. 17 trespassing violations of 14 protesters from the town justice court to Suffolk County Supreme Court, which would consolidate those violations with the plaintiffs’ pending motion asking that the court hold the town in contempt for not actively prohibiting the public from accessing the beach.

The town’s attorneys also ask that the court vacate or modify a June temporary restraining order prohibiting driving on the 4,000-foot stretch of ocean beach on Napeague that a State Supreme Court Appellate Division panel decided in February is owned to the mean high-water mark by the property owners associations representing landward homeowners.

The memorandum of law, submitted on Friday, follows an Oct. 17 protest during which commercial fishermen and their supporters drove across the stretch of beach, with 14 of them being issued summonses. It was a second act of civil disobedience following the Appellate Division panel’s decision that overturned a 2016 ruling that had been in the town and town trustees’ favor. Following the Oct. 17 protest, attorneys for the plaintiffs convinced a Supreme Court judge to move the trespassing violations to the County Supreme Court.

In September, the New York State Court of Appeals, the highest court in the state, rejected appeals by the town and the trustees to reconsider the February ruling, a decision that seemed to have brought to an end litigation dating to 2009. The chains of title to their respective properties, the plaintiffs claimed, extend to the mean high-water mark of the ocean per an 1882 deed in which the town trustees conveyed some 1,000 acres on Napeague to Arthur Benson but reserved rights to town residents, including some public use.

“The only injunctive relief awarded to plaintiffs in the final judgment as a result of this declaration was a limited prohibitory injunction barring the town ‘from issuing permits purporting to authorize their holders to operate and park vehicles on property owned by the plaintiffs,’ “ attorneys for the town wrote, adding that nothing in either the Appellate Division decision or the final judgment charged the town with prohibiting the public from accessing the beach.

Further, the Appellate Division decision and the final judgment “also recognized that an express fishing reservation in the 1882 ‘Benson Deed’ gave rise to an easement for the public to use the plaintiffs’ Napeague beach properties ‘for fishing and fishing-related purposes,’ “ the attorneys wrote.

The town had stationed Marine Patrol officers at the entrance to the beach on Oct. 17 and issued criminal trespass citations to 14 protesters as they left the beach. Asking the court to consolidate the trespassing cases with their pending post-judgment civil contempt motion “is unprecedented, statutorily unauthorized, and beyond the court’s jurisdiction,” the attorneys wrote. “Plaintiffs fail to explain how they have any standing to seek to participate in the 14 criminal trespass actions, given that none of the plaintiffs filed any complaint arising out of the criminal defendants’ alleged trespass, and plaintiffs are not parties (or even witnesses) to those proceedings.”

The case was concluded upon entry of the final judgment, they wrote, so the court lacks jurisdiction or authority to even consider the consolidation motion. Also, the attorneys wrote, “the pending post-judgment contempt proceeding and the 14 criminal cases involve different parties, procedures, and legal and factual issues, making any consolidation inappropriate.”

Dan Rodgers, an attorney representing some of the fishermen, criticized the plaintiffs anew on Monday. “Despite the fact that it’s their property, they have no connection to these proceedings whatsoever,” He said. “It’s unheard of, what they’ve done.”

The court should vacate the temporary restraining order in its entirety, the town’s attorneys wrote, as it lacks jurisdiction to grant additional substantive relief following a final judgment. Nothing in either the Appellate Division decision or the final judgment “imposes any affirmative injunctive obligation upon the town, much less does it require the town to expend its limited taxpayer law enforcement resources to physically prevent individuals from driving on plaintiffs’ privately-owned Napeague beach properties.”

The temporary restraining order “was improperly issued in the first instance,” the attorneys went on, “to the extent that it materially expands the limited injunctive relief awarded in the final judgment that has already been entered.” At minimum, the court should modify the temporary restraining order to remove the requirement that the town prohibit and prevent access to Napeague Beach, and “to expressly include recognition of the public use easement . . . permitting fishing and fishing-related activities on plaintiffs’ Napeague beach properties.”

The town, they added, is concurrently “seeking a judicial determination with respect to the scope of the public’s recognized right to use Napeague beach for fishing and fishing-related purposes.”

Friday’s action was the latest in a long-running disagreement pitting commercial fishermen and residents who have used the stretch of ocean beach for generations against the landward property owners who portrayed a dangerous environment with hundreds of vehicles weaving through crowds and children at play, and people and dogs urinating and defecating in the dunes.

In a five-day bench trial in Riverhead in June 2016, the plaintiffs contended that activities on the beach represented a threat to public health and degradation of the environment. The defense contended that even if the homeowners associations established that titles to their respective properties extend to the mean high-water mark, the town nonetheless retained the right to allow the public to operate and park vehicles along the beach, including the portion owned by the homeowners associations, based on the reservation in the Benson deed.

In the Nov. 2016 ruling in the town and trustees’ favor, State Supreme Court Justice Ralph Gazzillo noted that the 1882 deed “clearly reserved some rights ‘to the inhabitants of East Hampton’ and, arguably, the allowances for some public use.” The Appellate Division panel reversed much of that ruling in February.

Town officials have discussed initiating eminent domain proceedings, using public benefit as justification, in which the shorefront between the mean high-water mark and the toe of the sand dunes would be condemned and the property owners paid fair market value.