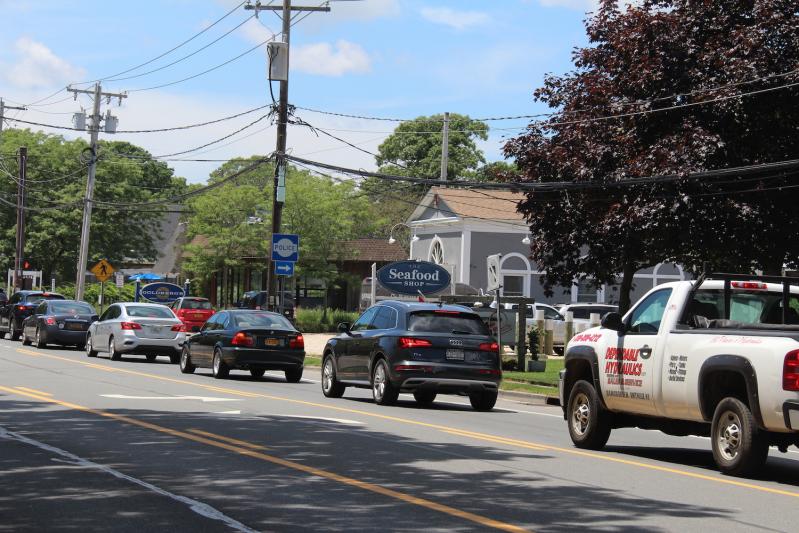 One goal for Wainscott is to create a continuous connection across the rear of all parking lots in the commercial core.
Durell Godfrey
By Christopher Walsh

Consultants to East Hampton Town have proposed a two-phase plan for implementation of the recommendations contained in the Wainscott hamlet study that was approved and adopted in East Hampton Town’s comprehensive plan in May 2020.

Lisa Liquori of Fine Arts and Sciences, who is a former town planning director, summarized the eight recommendations to the town board during its work session on Tuesday. They are to protect and enhance the hamlet’s natural environment and historic character; improve the pattern of development; develop a compatible design scheme; develop an integrated and workable parking layout; redevelop, in an environmentally sensitive fashion, the former sand and gravel mine; promote mixed-use development and workforce housing; promote a decentralized community wastewater system, and develop transportation improvements.

But there have been several changes since adoption of the hamlet study’s recommendations, she said. The town established the Wainscott Green park at the former Star Room site. The Peconic Land Trust acquired the property most recently housing the Il Mulino restaurant, the structures were demolished, and restoration of the land begun. The planning board is reviewing a draft environmental impact statement for the Wainscott Commercial Center subdivision at the former sand mine site. The town board has solicited requests for proposals for stormwater abatement at the rest stop on Montauk Highway, held public hearings on rezoning the westernmost portion of the commercial district, and retained Ms. Liquori’s firm, as well as Dodson and Flinker and McLean Associates, to prepare an implementation plan.

“Many features of this plan have already been superseded by events on the ground,” agreed Peter Flinker of Dodson and Flinker, but implementation must go forward, including creating a continuous connection across the rear of all parking lots in the commercial core to speed traffic flow and reduce impacts of traffic coming on and off Montauk Highway. Reducing curb cuts, connecting parking lots, shared parking, and development of public parking would open more areas for redevelopment, he said.

Consultants would speak with landowners, Mr. Flinker said, and consider “how can this plan improve conditions” economically and functionally for businesses and create new opportunities “as the post-Covid economic market changes for real estate and retail space and commercial space. How can we take advantage of those opportunities?”

Along with an update of existing conditions and outreach to land and business owners, the first phase of implementation would include a public workshop and a revised conceptual master plan and recommendations for the second phase, which could include rezoning. Mr. Flinker said that a working group that would incorporate everyone affected by the proposed plan and any zoning changes, “not by involving 500 people, but key representatives of each stakeholder group,” is being formed. The group of 20 to 25 would include residents, business owners, landowners, members of the hamlet’s citizens advisory committee, and an environmental organization.

The idea is “not to have an endless series of meetings,” Mr. Flinker said, but rather four meetings and a public listening session and workshop. The first meeting would see a walking tour of the study area, a presentation of current conditions by the consultants, and a discussion of issues, opportunities, and problems needing further exploration and review. The second would see a presentation and review of a revised master plan reflecting input from the first meeting, discussion, and brainstorming strategies.

A public workshop and listening session would follow. In a third meeting, results of the workshop and a final draft of the revised master plan would be reviewed, as would an implementation plan including a zoning strategy with alternatives. Finally, a fourth meeting would see review of the revised master plan, a final implementation strategy, and an outline of proposed zoning. This would lead to the second phase, Mr. Flinker said: the crafting and adoption of a revised zoning code.

Mr. Flinker told the board that the first phase should happen over the winter, with the implementation phase taking place in the spring.

Board members were supportive of the plan. “The sooner we can get this moving, the better it is,” said Councilwoman Sylvia Overby.