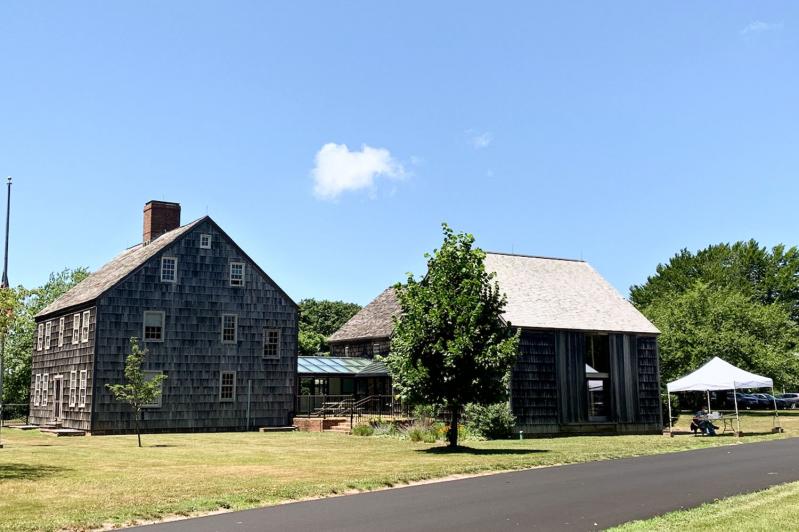 Lauren Steinberg, a senior environmental analyst with the town's Natural Resources Department, and Severo Kristofich, building maintenance supervisor in the Parks and Building Maintenance Department, proposed the installation of 20 Level-2 charging stations, on 10 dual-port stations, for use by the town's municipal fleet and members of the public.
Durell Godfrey
By Christopher Walsh

A significant expansion of electric vehicle charging stations at the East Hampton Town Hall campus, to be powered by solar energy, was one of three proposals brought to the town board on Tuesday, each aimed at moving the town toward its goal of achieving its energy needs entirely from renewable sources, thereby reducing the greenhouse gas emissions fueling climate change.

Lauren Steinberg, a senior environmental analyst with the town's Natural Resources Department, and Severo Kristofich, building maintenance supervisor in the Parks and Building Maintenance Department, proposed the installation of 20 Level-2 charging stations, on 10 dual-port stations, for use by the town's municipal fleet and members of the public. They would be positioned on the west side of the Town Hall parking lot, adjacent to the six existing electric vehicle charging stations, and available to the public most of the time, Ms. Steinberg said.

The board was told it should also consider expanding the parking lot onto the lawn to the north, which is now used to store vehicles and equipment. That, Ms. Steinberg said, would provide a location for future installation of more E.V. charging stations and an opportunity to incorporate their interconnection with solar panels and battery storage, all connected to the electricity grid. Such infrastructure could operate independently, Ms. Steinberg said, allowing the system to "island" in the event of a power outage.

The town board adopted a fleet efficiency policy last year, under which the town commits to purchasing electric vehicles whenever possible, and low-emissions options when it is not. Concurrently, Mr. Kristofich said, the world is transitioning to electric vehicles, with vehicle manufacturers pledging to phase out internal-combustion-engine models and state and national governments planning to ban their sale. The existing E.V. charging infrastructure must be built out to meet the looming demand, he said.

From Jan. 1 to Oct. 1, there were 290 charging sessions at the Town Hall charging stations, Ms. Steinberg said, with use divided evenly between the town's vehicle fleet and the public.

Ms. Steinberg and Mr. Kristofich presented five options, each including a minimum of 20 but as many as 66 additional charging ports, depending on an expansion of the parking lot and additional buildout of charging stations there. Solar panels could be ground-mounted or incorporated in solar carports, and each option includes battery storage.

The town could take advantage of the New York State Department of Environmental Conservation's Zero-Emission Vehicle Infrastructure Grant Program to fund the installation. The town, Ms. Steinberg said, could be awarded $250,000, with a 20-percent match required of the town. A request-for-applications period is set to expire on Oct. 29, and installation would have to be completed by May 21, 2023.

Board members were in support of pursuing the D.E.C. grant, and suggested further discussion as to where on the Town Hall campus the infrastructure would be further expanded. The board is to vote on a resolution to pursue the grant at its meeting this afternoon.

Also to be voted on today is a resolution that would adopt a policy to electrify heating, ventilation, and air-conditioning, or HVAC, systems at municipal buildings, both when systems are in need of replacement and when designing and constructing new buildings.

Today's resolution follows presentations on Tuesday and on Aug. 3, both of which included a recommendation by members of the town's energy and sustainability committee to adopt the policy. Air source and ground source, or geothermal, heat pumps are available for residential, commercial, and municipal buildings. Air source heat pumps were recently installed at Southampton Town Hall, and several other municipalities in the state have done the same.

Air source and geothermal heat pumps are far more energy-efficient than conventional heating systems, produce no greenhouse gas emissions, and have lower operation and maintenance costs than fossil fuel-based HVAC systems. Adoption of the policy would be "a small step in the fight against climate change," Paul Munoz, the energy and sustainability committee's chairman, told the board in August, but by setting an example it would be "a huge step in raising community awareness."

The board was inclined, on Tuesday, to vote in favor of the resolution.

Representatives of the New York Power Authority, a state agency that among other functions helps municipalities implement energy- efficiency projects, including conversion to light-emitting diode street lighting, were back on Tuesday, after addressing the board in July, to once again pitch a turnkey project that would see the conversion of 729 existing streetlights to LED models.

Upgrading to LED lighting would significantly reduce both greenhouse gases and utility costs, Ms. Steinberg told the board. LED lights can be more easily directed and controlled than conventional streetlights, she said. Streetlights in downtown Montauk were replaced with LED models a few years ago.

Jeff Laino of NYPA told the board that converting to LED streetlights would be "a safe and highly effective energy efficiency measure" and that working with NYPA is "a safe way to do this implementation." LED streetlights can be controlled and monitored remotely, he said, and offer "cleaner light," allowing greater color differentiation, which enhances public safety.

NYPA and the town, he said, would together determine the work required, with the securing of grants, rebates, or incentives to follow.

The replacement of 729 streetlights with LED models would cost around $470,000, the board was told. Mr. Laino estimated annual savings of $35,500 in the town's electricity costs, though he said that estimate was conservative. The town would also save around $14,500 in annual maintenance costs, he said, as "these lights are going to last at least 100,000 hours," or 22 years.

Board members expressed reservations. Converting all 729 streetlights "seems like biting off too much at one time," Councilwoman Kathee Burke-Gonzalez said, suggesting a slower approach. "Maybe a few projects together," she said, "as opposed to doing all 729 at once," allowing time to assess the streetlights' appropriateness for the town and the particular neighborhood in which they are installed.

NYPA would adhere to the town's wishes with respect to all components of the project, Mr. Laino said. "We can perform mockups," he said, installing fixtures and testing different designs. "We can take a field trip and see areas we've upgraded."

Mr. Laino also proposed that the town enter a shared services agreement with Sag Harbor Village, where around 300 more streetlights would be upgraded should that municipality move forward with replacement. In that event, "you're eligible for shared services grant money," he said. That would "make these numbers even more attractive."